Attendance at Rochester Americans games has been a topic of discussion for die hard fans and everyone else when pictures emerge of an empty arena on a Wednesday night (as the featured picture shows which is from October 30, 2019). The numbers had been deceiving for years until Curt Styres bought the team from Steve Donner.

There’s no question that the Rochester Americans of the last decade have taken back seat to many sports fans for many reasons. The number of reasons could go on for pages. Lack of playoff success, demographics of the fan base, preferences for the major sports leagues, and of course media coverage. The fact that the Democrat & Chronicle stopped covering the team has had an impact. The media doesn’t exist to sell tickets but they certainly did for decades with Kevin O’s coverage of the team. The paper still has tremendous reach. This could all be debated for pages and can be debated on the comments and replies.

These are public numbers and before I published them I asked the team if there was any comment about attendance. The one thing that was said is that from a business perspective the team is doing well and they don’t have any concerns about attendance. Keep that in mind before thinking about any doom and gloom scenarios regarding the status of the team in Rochester. They aren’t going anywhere. Last year a 15 year lease was announced between the City of Rochester and Rochester Arena LLC (an affiliate owned and operated by Pegula Sports and Entertainment). The details of the lease are the most favorable anyone has ever had with the city.

When looking at the numbers I separated them based on three different era’s of ownership.

A big takeaway – the city of Rochester is a 5,000 to 6,000 crowd on average for Amerks games. Spread out in an arena that seats 10,000 and it certainly feels a lot different. Those same numbers before the late 1990’s renovations generated a different atmosphere than they do now.

Dual / Donner owned (and skewed) – These were the last years of private team ownership by Steve Donner. The Amerks had a dual affiliation with the Buffalo Sabres and Florida Panthers. There wasn’t an AHL team for every NHL team and Buffalo wanted the split affiliation. The skewed part about this era is that the attendance numbers are not a reflection of the number of people in the stands. Tickets were all over town if you wanted them. The reasoning behind this was an attempt to bring back the atmosphere from the 90’s along with corporate partner satisfaction. Attendance numbers were based on tickets distributed, not people in the seats.

Florida / Curt Styres owned – This is when attendance was based on the number of people in the seats. Ownership had to bring a value back to the tickets after years of freebies many came to expect. Attendance did decline but it wasn’t as drastic as the charts show.

Buffalo / Pegula owned – This is when Pegula Sports and Entertainment purchased the Amerks from Curt Styres and reunited the affiliation. The big boost attendance was fueled by $10 season tickets. The numbers have been accurate based on reporting and what’s in the stands.

The numbers in the charts are all from hockeyDB.com where they have previous season results listed in an easy to view format. There are other resources available for attendance numbers prior to 2005 but 14 seasons was enough to compare the seasons.

The numbers are by era, year, and day of the week. The number in white in each column is the number of games played that season or on that day. All numbers in the Buffalo era are based on games played inside Blue Cross Arena. I didn’t include the games played in Buffalo or Frozen Frontier. The games in Buffalo had been skewed as well. Only the lockout season really had a large crowd. Other season totals were inflated by the number and wasn’t an indication of Rochester attendance.

So, let’s jump right into it. If you copy or share a chart I’d just ask you give credit back to the site here.

Starting with average by season you can see where numbers took a sharp decline in the Florida years (Friday nights remained steady). The numbers increased when Rochester was reunited with Buffalo and $10 season tickets before the honeymoon so to speak ended in 2013/2014. Regular season success without accompanying playoff success doesn’t equal box office success, which is what this town was used to and desires.

Subtract a thousand tickets distributed during the dual years and attendance for the most part has remained between that 5k and 6k threshold. 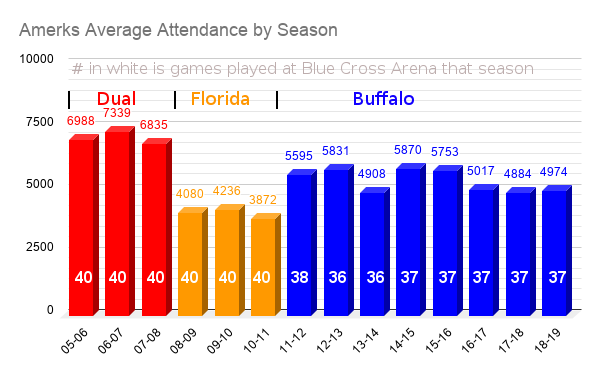 Moving into averages by day of the week you can see when the team jumped into playing games on Sunday to try and attract a crowd and in recent years when they started moving away from them. One of the biggest reasons is the reduction in three games in three days over the weekend. The players association has worked with the league to reduce them and bring a focus on development and practice schedules. Rochester only plays one Sunday home game in the 2019/2020 season. 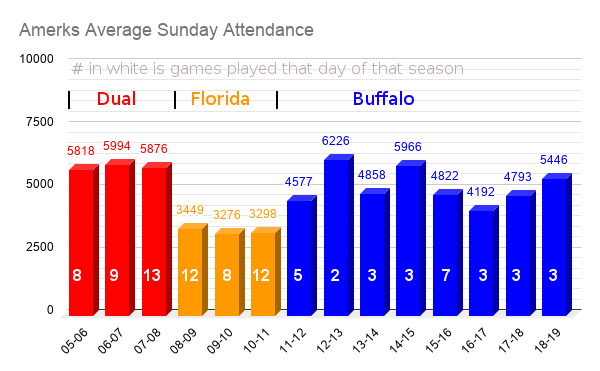 Monday games have often been on holidays to attract crowds when the kids are out of school. They didn’t play any last season and won’t play any in 2019/2020 either. 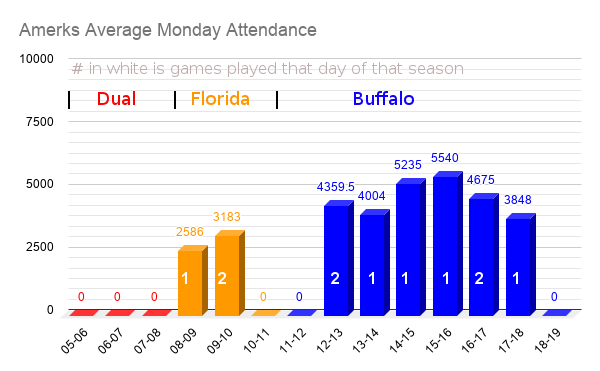 Tuesdays are an odd day. With so few games there isn’t much to say about this day. 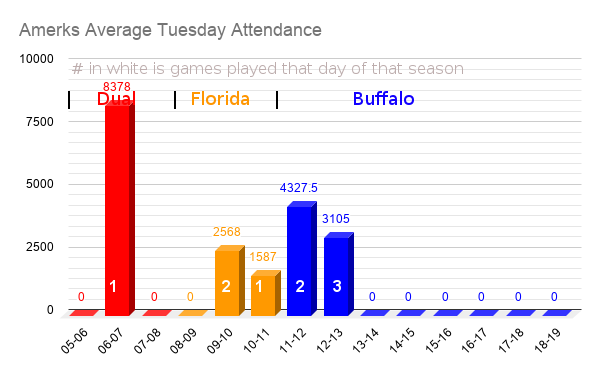 Looking at Wednesday attendance you can really see where the dual era had different numbers. There wasn’t 5,000+ at those games on average. Numbers have fluctuated over the years and often boosted by numbers later into the season depending on how the team is playing. The Amerks have played two Wednesday games already to start the 2019/2020 season and have averaged 2,695 a game so far. 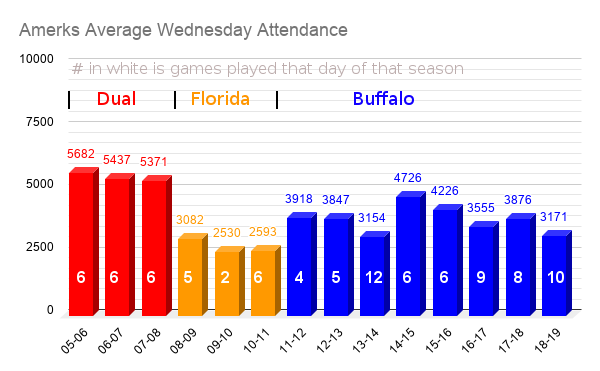 Thursdays are like Tuesdays. An odd day and low sample size. No one likes playing on Thursdays. 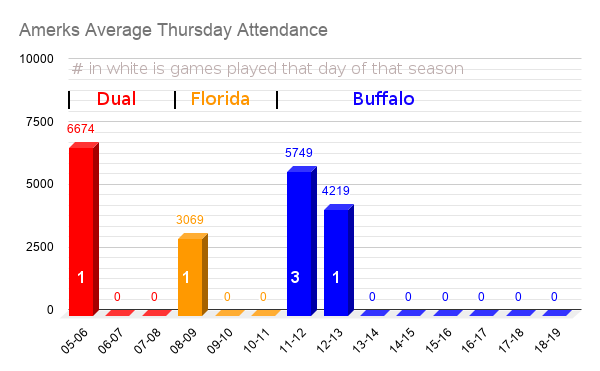 Friday night is prime hockey night in Rochester and overall the best day of the week to look at with attendance. The dual years are again off. They weren’t about 2,000 people away from a sell out on average. The Florida years had a healthy average of about 4,800 per game as the chart shows. The last three seasons have seen an overall decline compared to the first five seasons reunited with Buffalo. 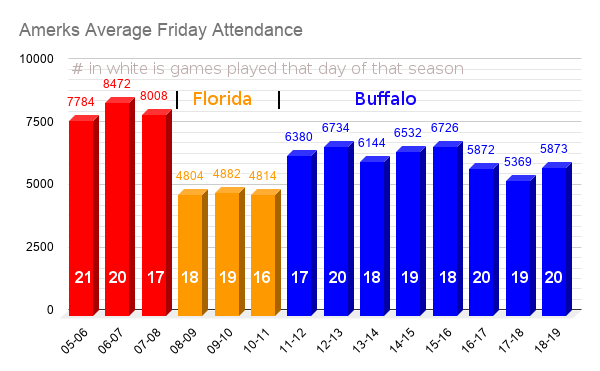 One thing to point out about Friday nights is that attendance fluctuates depending on the month. The home opener in October always draws a large crowd and then takes a nose dive through Halloween and fall high school sports seasons. The numbers see a big boost during the holidays and from there on out they remain fairly steady. The big jump in February from the 2017/2018 season was the almost sell out game when Brian Gionta played. 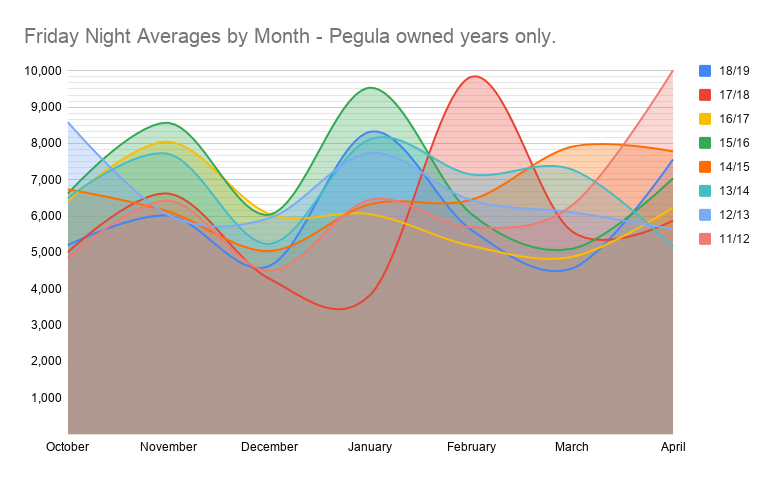 The number of Saturday games have fluctuated over the years but remained steady over the last six seasons. The Amerks will play six home games this season on Saturdays. 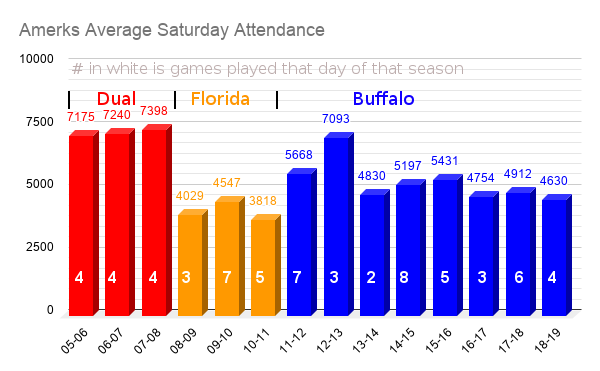 Here’s a chart that will show how the games in Buffalo and also the game at Frontier Field gave a boost to the overall average for a season compared to actual games played inside Blue Cross Arena. A fake crowd of 15,000+ in Buffalo gives the home attendance average a big boost in every season the games have taken place. Can’t blame a team. An average of over 5,000 looks better than under. 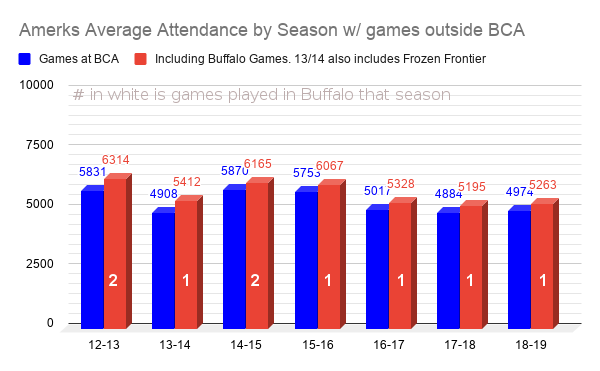 At the end of the season I’ll revisit and update all of these charts but going forward it will be just the Buffalo years.

The discussions will continue about why the numbers are the way they are and one thing that everyone agrees on – repeated success beyond round one of the playoffs and winning the Calder Cup and would bring a new energy to the building.

If you’ve made it this far and think ticket prices could be to blame I’d ask you to think about that again. Rochester has some of the cheapest prices in the league.