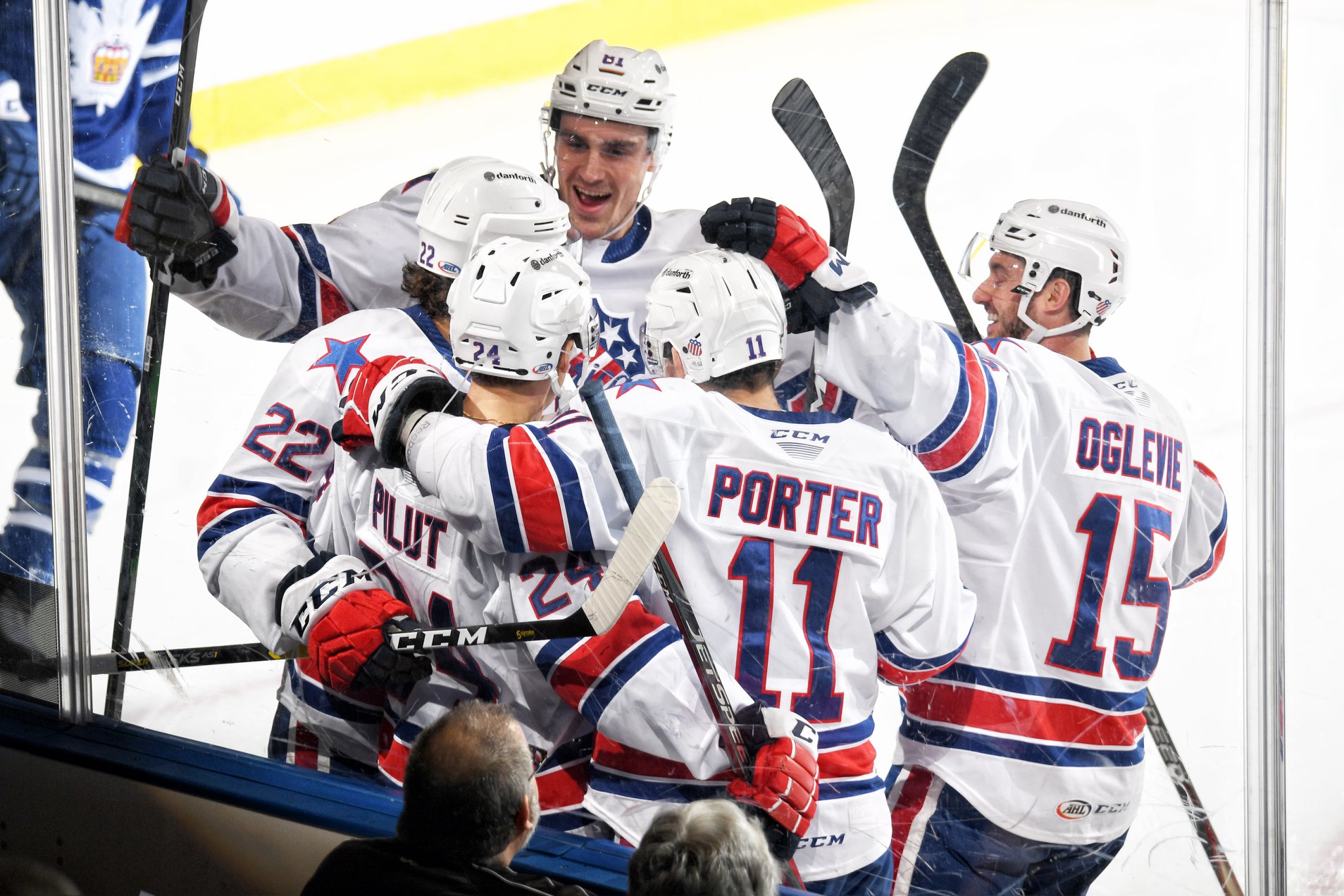 When the injury and call up bug struck the Rochester Americans in early November there was no way anyone could have predicted, other pure sports optimism, that this team would go on an 11 game point streak and go over a month since the last regulation loss. The streak reached 11 with a 4-0 win Wednesday night over the Toronto Marlies.

Andrew Hammond back stopped the win with his third shutout of the season which ties a season high for shutouts in his professional career. Hammond has a 5-0-1-0 record since the point streak started on November 1st along with a 0.950 SV% during this stretch. Since the season started Hammond has played 12 games with only two rough games in which 13 goals were scored against him. Takeaway those two games and he would have a 0.940 SV% this season which would be the best in the American League.

This game was the first time that the Toronto Marlies had been shutout since February 22 of last season.

Zach Redmond opened the scoring just 61 seconds into the game shooting the puck bar down from the right side on the power play. Toronto had cleared the puck down ice which allowed Hammond to play the puck to earn a secondary assist. Lawrence Pilut gave a head fake and pass inside the blue line to Redmond who took it in to score.

Just over two minutes later Pascal Aquin scored his first American League goal to give the Amerks an early 2-0 lead. John Gilmour sent a shot towards the net that was tipped by Casey Fitzgerald. The puck bounced through the air and Aquin tapped it into the net from inside the crease.

Rochester dominated the first period not only in goal scoring and shots (13-6) but just overall play by controlling every aspect of the game. This would extend through the next two periods. After the game Chris Taylor said there were some moments they didn’t like that they would like to clean up.

Curtis Lazar used his speed and strength to carry the puck down the left side of the ice in the second period beating a Marlies attacker and scored his fifth goal of the season at 12:23 of the period. JS Dea was the intended target for his pass down low but he got a bounce off another Marlies player and the puck went into the back of the net.

Casey Fitzgerald slipped into the slot to score his second goal of the season and first playing as a forward. Lazar dropped a pass back into the zone to Brady Vail who spotted Fitzgerald down the middle following a line change.

“I just try to do whatever I can do to help the team win,” said Fitzgerald, who played forward for the fourth consecutive game. “Iâ€™m new to the position and I just try to give it everything I have whenever I get on the ice. Tonight I got rewarded with a goal and an assist, but much of the credit goes to my linemates (Aquin and Vail) as they were working hard to set me up, but it does feel good to contribute offensively.”

Andrew Hammond almost had a second assist on the night but also had the save of the night. Late in the third period as the Marlies were pressuring the Amerks the puck went off the cross bar and as Hammond went to his stomach he kicked up his back feet and also kicked the puck out of the air to the front of the net. Curtis Lazar had the puck and sent an outlet pass to Zach Redmond who was leaving the penalty box. Redmond skated in on the Toronto net and put a shot off the cross bar.

Rochester improved to 14-3-2-2 on the season and have the lowest amount of regulation losses in the league with three. Since November 13 the Rochester power play is operating at 29.2% which is a big improvement from how the season started.

Also worth noting is that Rochester is leading the league in 5v5 scoring just ahead of Toronto but holding a wide margin over the rest of the league. Even strength scoring, power play scoring, goaltending, and defense. Everything is clicking for this group.

What team has the best 5v5 goal differential? The Rochester Americans with a +24. Toronto is a close 2nd at +21 and then it drops off from there. pic.twitter.com/klEKwSkUtq

The home stand continues with games Friday and Saturday vs Charlotte at Blue Cross Arena.

One injury note is that Scott Wilson left the game in the first period with an upper body injury and did not return. There weren’t any additional updates available following the game.

Highlights as they were sent out in Tweets.

Rewind a bit and Andrew Hammond earned a secondary assist on the first goal! pic.twitter.com/Z0lWP24VdY

Pascal Aquin taps in the puck and the Amerks are up 2-0! First AHL goal for Aquin. Assists to Gilmour and Vail. pic.twitter.com/IMXiWu2nfh

Looks like Sean Malone is ready to suit up as an emergency goalie if needed. Slid right into the crease. pic.twitter.com/kciobVyL5X

The full play on Lazar's goal from JS Dea. Worked em straight to the net. pic.twitter.com/1x6Nt0rMW5

Lazar digs it out on the boards and Vail feeds it to Fitzgerald who scores!

Fitzgerald was drafted as a defenseman but has found his spot in the lineup as a forward. pic.twitter.com/o30mHzwUjM

Watch out for flying sticks! pic.twitter.com/H5s0C2Ta4M

Hammond kicked it out of the air! pic.twitter.com/WzttIZ6Bal

What a sequence. Hammond kicks the puck of the air from his stomach and then Redmond gets a breakaway out of the box and hits the post. pic.twitter.com/MQ7hGxhbiJ