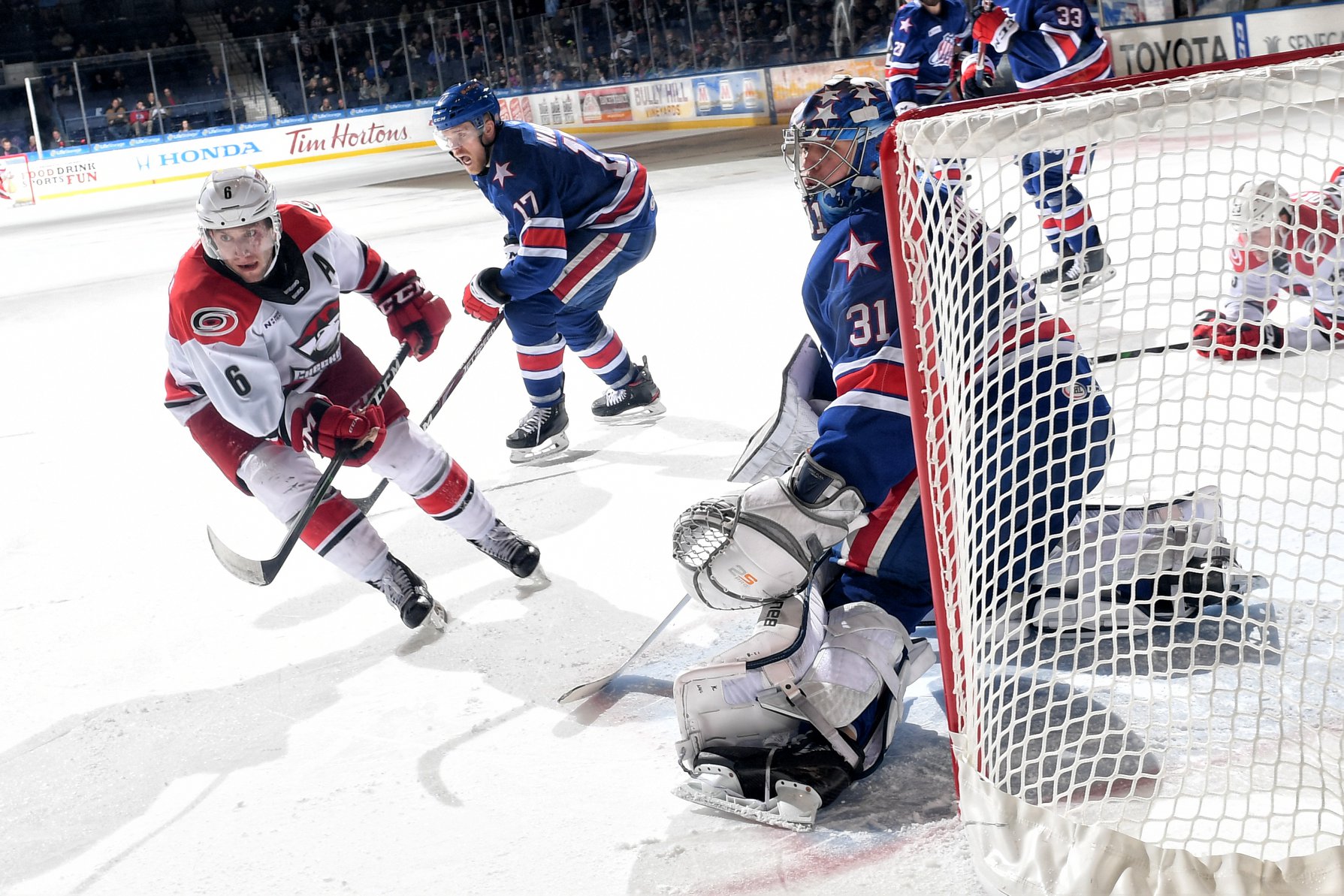 The Rochester Americans tallied another win Friday night with a shutout win against the Charlotte Checkers and have now gone 154 minutea and three seconds without being scored on. This is a nice little run. The last time a team scored on them was the Cleveland Monsters in the second period on November 30. Rochester has also extended the point streak to 12 games (9-0-2-1).

“I think it’s just the hard work,” Kevin Porter said after the game when asked about the chemistry in the locker room. “We have some confidence, a little bit of a swagger, and we’re playing well.”

It was a fast paced first period with Charlotte controlling the pace of play and preventing Rochester from getting a shot in the first eight minutes of the first period.

Tripping penalties to John Gilmour and Dalton Smith provided Charlotte with a five on three power play for 90 seconds and the penalty kill unit came up big preventing them from scoring.Â Jonas Johansson was also stellar and would go on to win his seventh game of the season. Johansson was able to keep Rochester in the game early. The kill changed the flow of the game and gave Rochester a boost.

Dalton Smith setup the first goal of the game working hard behind the net and gaining control of the puck. A quick pass to Sean Malone out front who scored his fifth goal of the season and it was also his second game winning goal this season.

Six minutes into the second period the Amerks still had a 1-0 lead but Charlotte had a 17-8 advantage in shots which has been out of character for this team. The Amerks have consistently out shot teams throughout a game but it was a new challenge facing Charlotte. By the end of the game Rochester outshot them 31-26 and regained control.

The game changed completely when Rochester scored three goals in under three minutes late in the second period. The 4-0 lead was more than enough to secure the win.

Kevin Porter got a bounce when his shot went off the skate of a Charlotte skater. Andrew Oglevie sent a pass down low to the side of the net and Porter was attempting to center a pass to Brett Murray when it went off the Charlotte player and into the net.

Brady Vail scored the third goal of the game, and his first of the season, by redirecting a low shot by Zach Redmond from the blue line.

Eric Cornel scored the final goal off a redirect from a Dalton Smith shot at the point. Charlotte goalie Alex Nedeljkovic played the puck out of his crease and tried to clear the zone off the side boards. Dalton Smith stopped the puck and released a quick shot. The two assists for Dalton Smith were his first multi point game as an Amerk.

Zach Redmond talked about the game saying, “We found a way to win but there’s definitely a lot we need to clean up.”

Says a lot when the team wins 4-0 and they’re still talking about needing to improve. This group knows the season is long and you can’t get comfortable.

With the win Rochester improved their record to 15-3-2-2 and jumped ahead of Toronto for first place in the North Division, first place in the Eastern Conference, and tied for second overall in the American League. There’s a lot of hockey to be played but it’s been impressive given what this team has gone through over the past 38 days. Rochester has allowed the fewest goals against in the American League and has a +28 differential playing five on five. Rochester also has the fewest regulation losses in the league.

Scoring highlights in gifs from the game:

Kevin Porter from Oglevie and Redmond gave the Amerks a 2-0 lead. pic.twitter.com/VeS3kSGcMC

DSmith quickly sent a shot on net after a bad play by the goalie and Eric Cornel tipped it in for the 4-0 win. pic.twitter.com/dbv3YQafES

For all you savages: while not contractually a Sabres prospect, here's Pascal Aquin's scrap tonight with Cedric Lacroix. Decent tilt.

Sean Malone's fifth goal of the year has the Amerks ahead 1-0 on Charlotte end 1st. pic.twitter.com/9uD6l4PHVQ