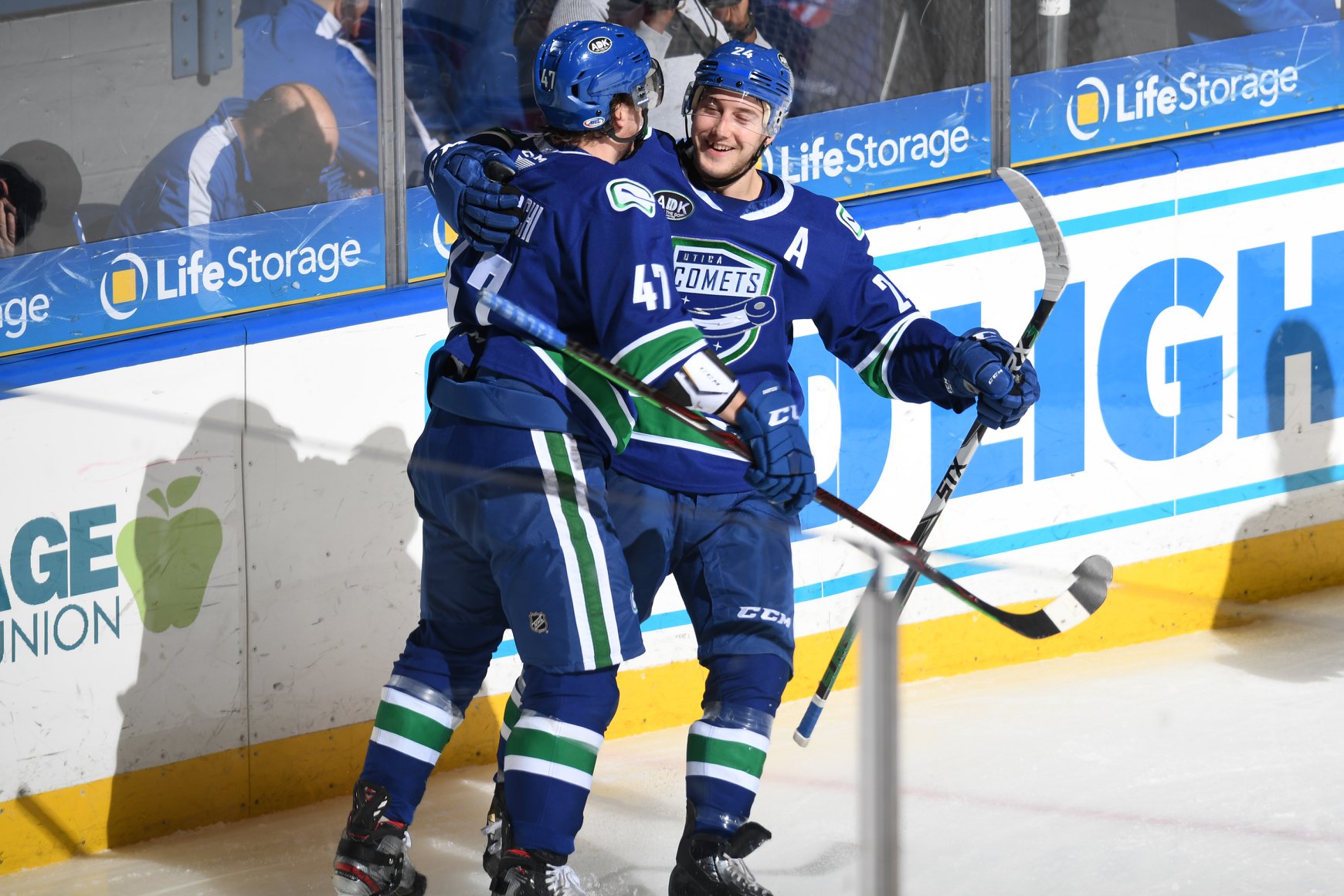 The Amerks head into the Christmas break sitting at 19 wins after a 4-3 loss Saturday night on home ice to the Utica Comets. The game winning goal was scored with 87 seconds left in the third courtesy of a bounce. Two power play goals and a short handed goal for Rochester weren’t enough for the fast skating Comets team who scored all four goals at even strength.

A difference in this game for Rochester was that they were held scoreless playing even strength five on five. The team has found success with even strength scoring and has been the best team in the league but Utica was able to keep them off of the scoreboard. Unfortunately Utica had success scoring all four of their goals at even strength.

The first 20 minutes of play had no score and even more surprising was no penalties. It was a competitive period of play with the Comets leading nine to five in shots.

Taylor Leier scored the first goal of the game, also his first goal of the season, just 3:34 into the second period. Zach Redmond fired the initial from just above the face off dot and Leier scored on the rebound by shooting it off of the back of goalie Richard Bachman and into the net. Lawrence Pilut earned an assist as well on the play.

Utica took a 2-1 lead scoring two goals off of rushes up ice. Sven Baertschi scored first on a three on two rush followed by Vincent Arseneau slipping through the defense to score one on one against Andrew Hammond.

John Gilmour scored a power play goal to tie the game at two before the end of the second period. It was his second goal in as many nights. JS Dea and Sean Malone had assists on the play. Brett Murray also played a big part (no pun intended) on the goal by screening Richard Bachman. Gilmour sent a low rising shot at the net and bodies parted ways for it to find the way to the net.

The game continued the back and forth play with Jonah Gadjovich scoring at 4:56 of the third period to give Utica a 3-2 lead. Dylan Blujus took a shot from the point that went off the leg of Gadjovich who was able to pick up the loose puck and quickly bat Hammond who was partially screen by Gilmour and Arseneau who were battling for position.

Rochester finished the game two for three on the power play and also only took two penalties.

Taylor Leier scored his second of the game to tie the score at three by scoring an unassisted short handed goal at 6:44 of the third period. Leier said after the game that he saw an opening and went for it. It paid off for him.

Another goal would be scored off the back of a goalie and this time it was the game winner for the opponent. Olli Juolevi scored with 1:27 left in the game to give Utica the win. The puck was knocked down on it’s way to the net and took a bounce in the air that went in off of the back of Hammond.

After a stretch of 16 mostly dominating positive games the Amerks have stumbled over the last three. A loss Wednesday night, the held on Friday night for a win, and then this loss to Utica. Injuries and missing players isn’t an excuse but this was the fourth game without Kevin Porter, one of the teams leading scorers. The team also played without Andrew Oglevie who left the game early Friday night and didn’t return.

Casey Mittelstadt had two shots on goal in his third game with Rochester and is still looking to tally his first point.

Rochester is back in action next Friday when they host Belleville. It’ll be the first game of the season between the two teams.

The highlights in gifs.

Another look at the first goal of the season for Taylor Leier. pic.twitter.com/Jr4Xn7crgi

Utica ties it up. Saw this one coming on the rush. Sven Baertschi tapped it in. pic.twitter.com/HkT5KsRbLH

Utica takes the lead 2-1. Looks like they're going to have success on the fast breaks. pic.twitter.com/FWdfkm8ymH

JS Dea and Sean Malone had assists on the Gilmour PP goal.. pic.twitter.com/rLJHnt45X0

This was the 3rd goal of the game for Utica. Jonah Gadjovich took the shot off his leg and picked up the loose puck to score. pic.twitter.com/ClRRuGvM22

Top shelf, unassisted, and short handed for Taylor Leier! His 2nd goal of the game. pic.twitter.com/VdPpt5tleb

Here’s another recap of the game from a Utica reporter:

Comets pick up big North Division win with help from late goal on a fortuitous bounce.
(I just wanted an excuse to use "fortuitous")https://t.co/d7avHXm02Z