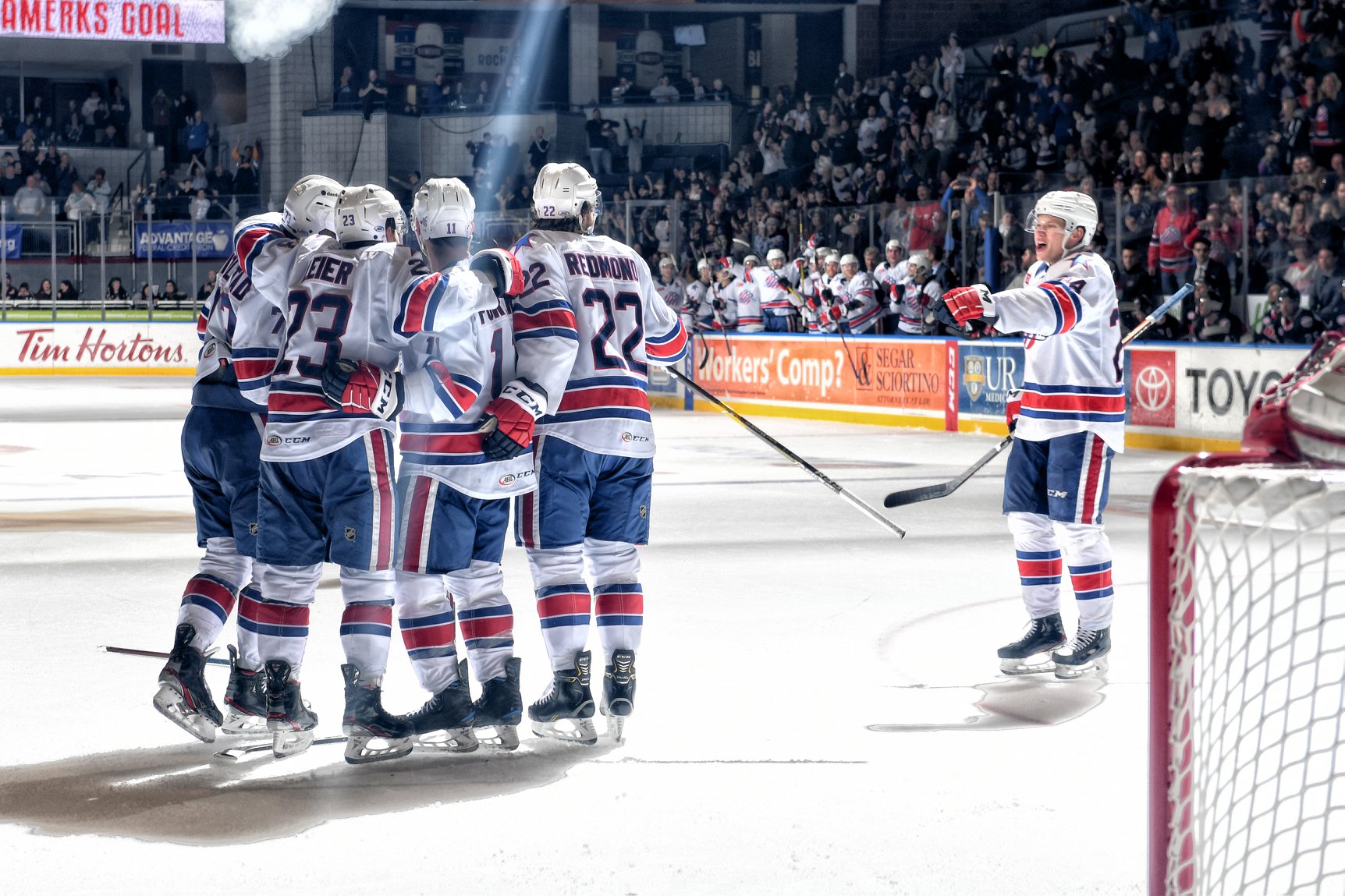 The roar of the building when the game winning goal was scored with two seconds remaining on the clock is the type of moment that will be remembered. Lawrence Pilut showed extreme patience at a crucial moment waiting an extra couple of seconds to shoot and Taylor Leier took a beating in front of the net as the puck went off his left shoulder into the net.

A crowd of 8,035 let out a thunderous roar in a building that often lacks that kind of excitement.

Taylor Leier described the ending moments saying, “I got hit first and I had my hair in my eyes because my helmet came out of whack when I was in the slot. The D man pushed on my back, I leaned on my stick and my stick broke. All I saw was the puck coming for my face so I ducked out of the way, it hit me (left shoulder), and I didn’t even know it went in but I just heard the horn. Sometimes lucky things like that happen and Im glad it happened for the team, it was a big goal for us.”

Casey Mittelstadt earned his first AHL point with a secondary assist on the goal.

The two teams exchanged power play goals in the first period in just under two minutes. Jordan Murray scored for Belleville and Zach Redmond scored for Rochester. While the game was tied after 20 minutes it wasn’t the typical dominating period for Rochester. This was a fast puck moving Belleville team and Rochester was mearly staying in the game.

Eric Cornel scored his sixth goal of the season at 4:09 of the second period with a beauty of a give and go with Scott Wilson on a two on one play. Sean Malone had an assist on the play as well.

Joseph LaBate was able to skate in and beat Johansson after forcing a turnover as the puck had landed at the feet of John Gilmour just inside the blue line. Vitaly Abramov scored the third goal of the game for Bellevile at 18:09 of the second period. Abramov had chipped the puck off the boards, skated around Will Borgen, faked the cross ice pass, and scored down low as John Gilmour was trying to block a possible pass.

After 40 minutes the Amerks were down 3-2 and being outshot 28-18. It felt as over as it could’ve been. Belleville was faster and just doing everything better.

Going into the third period is when the Amerks returned to playing a simplified game of playing physical, getting pucks down low, and then working at setting up scoring chances. And it paid off.

Lawrence Pilut scored the game tying goal at 12:09 of the third period with the help of Dalton Smith and Brett Murray forechecking and creating a lot of traffic in front of the net. Dalton Smith was able to poke the puck out from under his feet out towards Pilut who was able to pick the corner over the left shoulder of Filip Gustavsson.

It’s the type of game that makes one wonder why Pilut is still playing in the American League. No one in Rochester is complaining, we’re watching a special player and Friday night was one of those moments.

Taylor Leier was also a difference maker in the game and is trying to fight his way back to an NHL contract and prove he’s worthy. Leier signed an American League deal in the off season due to needing major shoulder surgery. Continue to play like last night, and the way he always has, and he’ll get that opportunity again.

Jonas Johansson earned his eigth straight win, all regulation wins, dating back to November 13. In that time he has a 1.74 goals against average and a 0.946 save percentage.

CJ Smith left the game at some point during the second period and didn’t return. He did not go with the team on the bus to Binghamton. No other updates are available as of publishing this.