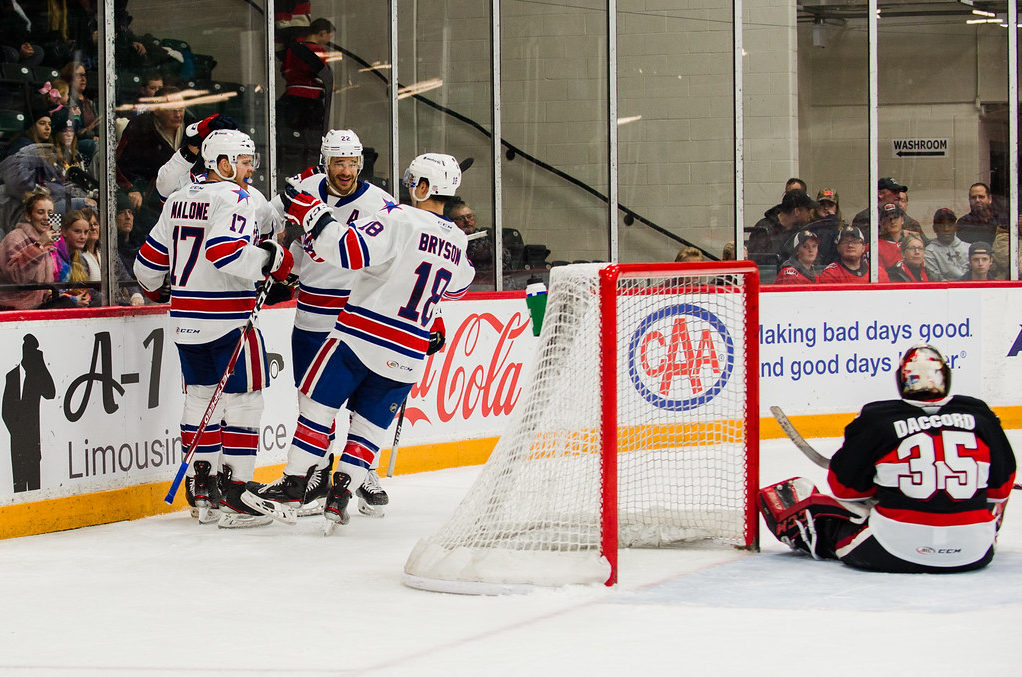 The Rochester Americans put together a win for the second Friday in a row against the Belleville Senators and again they had to work for it. Remi Elie scored the game winning goal at 1:01 into overtime to award Rochester the 4-3 win. Sean Malone and JS Dea had two point nights (goal and an assist each) and Casey Mittelstadt scored his first American Hockey League goal.

It’s not ideal to give up a point to a divisional team but it was a good road win to attempt to get things back on track. The Amerks had lost their last three in a road and had also lost back to back games in regulation for the first time all season.

The first period was slow with Belleville scoring first at 8:11 when Josh Norris scored his 17th goal of the season by weaving down low into the play and picking up the loose puck.

Rochester was a new team in the second period finally having some legs under them and Sean Malone was leading the way.

Malone scored at 1:59 of the second period, his seventh goal of the season, to tie the game 1-1. Malone helped force the play out of the zone and Eric Cornel fed a centering pass to him from the side wall. Malone was all alone and went back hand to beat goalie Joey Daccord.

Alex Formenton scored his 14th goal of the season by redirecting a shot from Erik Brannstrom.

Excitement built and the building started to go silent when JS Dea scored off of a give and go with Malone to tie the game 2-2. Zach Redmond had a secondary assist by feeding the puck to Malone skating down low.

A highlight of the game came at 18:28 of the second period when Casey Mittelstadt scored his first American Hockey League goal. Sean Malone didn’t touch the puck to earn an assist but played a part in tying up Belleville players at the blue line to slow them down. As Belleville was attempting to clear the zone they were caught off guard by Mittelstadt who was still in the zone. Mittelstadt lifted a stick, stole posession, turned and went in alone on net to score short handed and unassisted. It was the highlight goal we’ve been waiting to see from him with Rochester. Overall it was his best game in an Amerks uniform as well. Hopefully it was the proverbial monkey off the back to get him going.

A scary moment with 40 seconds left in the second period when Taylor Leier was knocked to the ice and appeared to take a puck of the back/left side of his neck. Additional medical attention was quickly called to the ice and the period ended early. He left on the ice on a stretcher but was sitting up and waving to the crowd. No additional updates were available as of publishing this recap.

Through 11 minutes of the third period the Amerks had a 9-1 lead in shots (ended the game with a 38-22 advantage in shots) but it would only take one shot for Belleville to tie the game.

Drake Batherson snagged a rebound in front of the net and beat Johansson to tie the game 3-3.

Once the game entered overtime the Amerks were quick to lead the action. Lawrence Pilut sent a long cross ice pass off the boards that was intended for JS Dea skating down ice. The pass was just a bit too for for Dea but he continued to chase it down. Dea forced a turnover, created a shot, and Remi Elie was there to shoot into a wide open net to win the game.

Amerks have more game this weekend playing Saturday afternoon at 4pm in Toronto.

They were without Scott Wilson and Dalton Smith who were called up this week to the Sabres. Casey Fitzgerald and Andrew Oglevie remain on the injured list with a hopeful return next week for Oglevie.

Belleville takes a 2-1 lead. Alex Formenton tips one in. pic.twitter.com/igXW9z2GsY

Casey Mittelstadt scores his first AHL goal and it's an unassisted shorty! Amerks up 3-2. pic.twitter.com/etctFTZL9v

He was knocked down to the ice and the puck went off the left side of his neck/side of the head.

Only takes one shot. Drake Batherson ties it up 3-3. pic.twitter.com/dn6I57Phy8

Remi Elie OT game winner! JS Dea created the turnover, Pilut is the one that sent it down ice. Amerks win 4-3. pic.twitter.com/nXDoHZ1T26