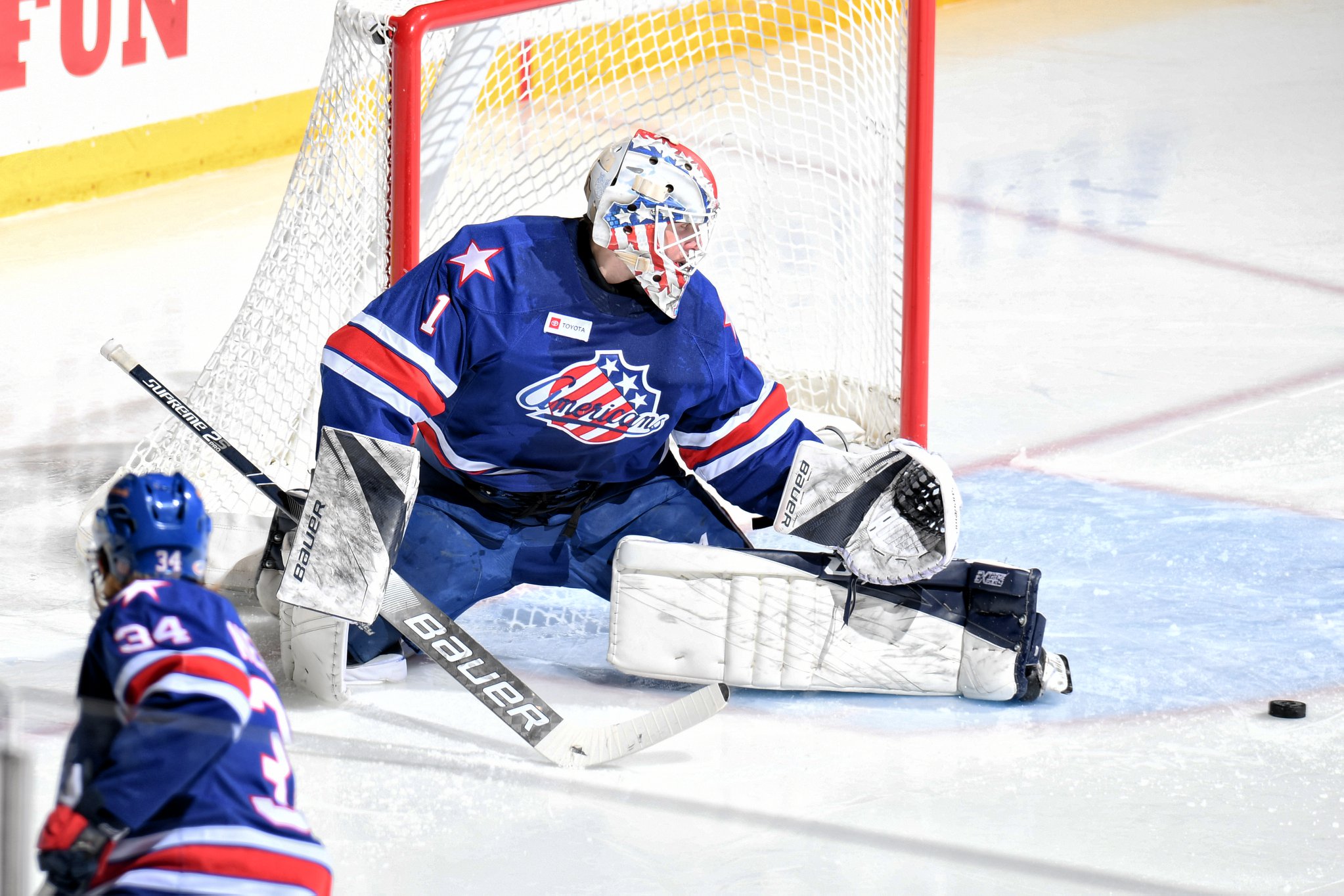 The Rochester Americans officially reached the halfway point of their season Friday night by forcing overtime and earning a point in a shootout loss to the Cleveland Monsters. The bad news is that Rochester is on a five game losing streak and has lost nine of their last 12 games. The worst stretch of the season so far.

“I think we played a really solid game tonight. I think we can be proud of it,” defenseman John Gilmour said after the game. “A couple tough bounces against us and a lot of penalties on both sides so there’s a few minor things we will clear up in our meeting tomorrow morning. Other than that I think we can go to bed knowing that we played a solid game and you know it’s anyone’s game in a shootout.”

There’s still 38 games of hockey to play in the season and no one is hitting the panic button.

Ukko-Pekka Luukkonen was the main storyline of the night starting in his first game with the Amerks this season and finished the game with 23 saves. He had also played in the last regular season game of the 2018/2019 season in a 4-2 win with 32 saves.Â The 20 year old goalie is going on the road with the team to Lehigh Valley (Saturady) and Hershey (Sunday) so there’s a good chance he’ll get another game this weekend.

After the game Luukkonen said, “It stinks to lose especially at home but I think we played a solid game and there were some bounces but yeah I feel like there’s some things I still have to sharpen up and there’s somethings to be happy about. Overall it was not a bad game at all.”

There’s no doubt that Luukkonen has a big (no pun intended) future ahead of him. He made some big saves and gave up a couple he’d like to have another chance at.

John Gilmour scored the first goal of the game on the power play, and the only goal of the first period. Gilmour retrieved the puck from behind the Amerks net and flew up ice unassisted and roofed the pook over the shoulder of Monsters goalie Veini Vehvilainen.

Asked about his first reaction after the goal Gilmour said,Â “Say wow. I thought maybe I wouldn’t be able to do that but it happened so it felt pretty good.”

The first period was reminiscent of the run in November when the Amerks controlled the pace of place in the offensive zone and was the better team at both ends of the ice.

And then the second period hit. Rochester was called for five different penalties in the middle period, some good calls, some not. It was one of those games where questionable calls were made on both sides but in a game like that a player has to adjust and not fall into it.

Ryan MacInnis tied the game at one at 2:55 of the second period on the power play. It was a partial screen on Luukkonen and MacInnis found an opening over the left shoulder.

Casey Mittelstadt scored his fourth goal as an Amerks forward by buring his own rebound. JS Dea had finished serving a penalty when he forced a turnover in the offensive zone and dropped the pass to Mittelstadt. The first shot went off the pad and then Mittelstadt grabbed the rebound and shot it into an open net.

The excitement quickly vanished when Trey Fix-Wolansky scored 73 seconds later to tie the game 2-2. Trey Fix-Wolansky had carried the puck in on the right side and sent a perfect wrist shot into the net beating Luukkonen on the far side.

Cleveland took a 3-2 lead at 15:11 of the second period when an odd and bad bounce provided Kole Sherwood with an opening to bang it in. The puck was shot wide of the net and in any normal hockey play it would’ve went off the back boards and out around the net. Instead it hit the boards and came back out the near side.

Penalties were a problem in the second period but the penalty kill was also excellent killing off two different five on three’s. Unfortunately it didn’t create any momentum that lead to a goal for the home team. Two penalties that could be questioned would be when Casey Mittelstadt was called for boarding and when Casey Nelson was called for goalie interference. Two good sells by the Monsters. The loss isn’t about the calls but the calls were a part of the game.

After being out played in the second period the Amerks returned for the third period and were back in the game. The game tying goal was scored at 15:32 of the third period by CJ Smith off of a one timer. John Gilmour had taken the initial shot that went off the pad of goalie Vehvilainen. The rebound bounced out to Kevin Porter who sent the pass to CJ Smith on the far side to score. 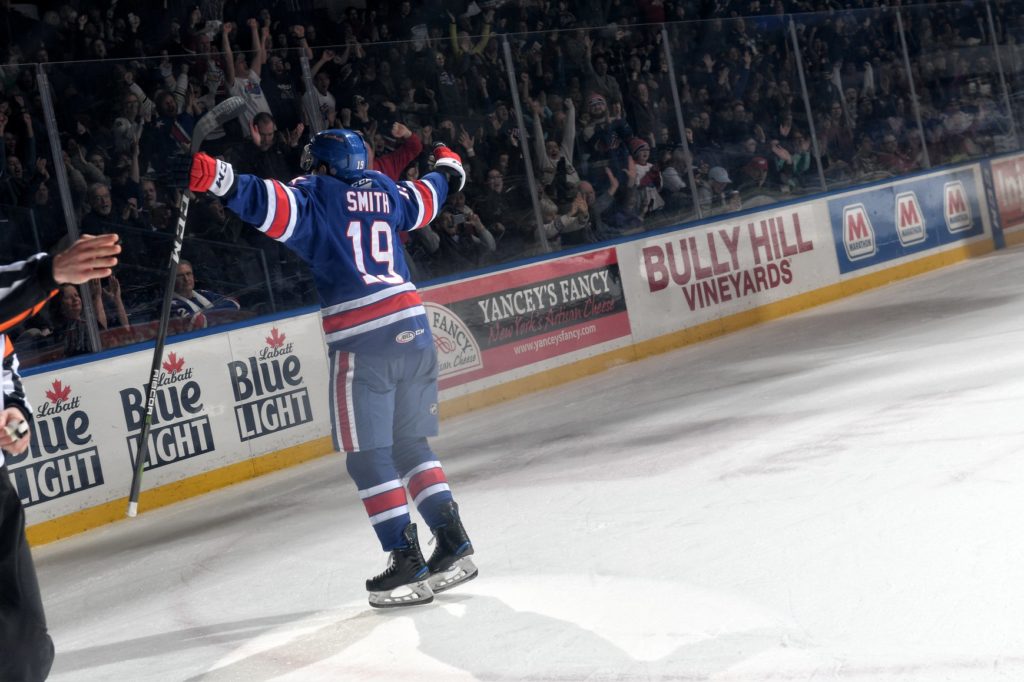 “I think our third period was our best period,” Casey Mittelstadt said after the game. Talking more about the game Mittelstadt said, “It was obviously a little bit crazy and those games usually
make for fun games it was a fun game tonight. Especially when we get all those kills it would be nice for us to to get one on the power play there in over time. Obviously we have to work on that and clean that up a little bit. It was it was a good comeback for us in the third and obviously we fell short a little bit but it was a good point.”

Chris Taylor said, “I thought the first period we were really good, second period was a let down, and the third period was kind of a wash.”

Penalties continued in overtime with both teams serving minors to setup four on three hockey but neither team could score.

In the shootout the only player to score was Monsters forward Markus Hannikainen who sold a fake and went back hand over the pad of Luukkonen.

“He scored so that’s pretty good probably,” Luukkonen said when asked to rank the move on the play.

It was a great play by Hannikainen but Luukkonen didn’t get any help in front of him.Â Rochester is now 1 for 15 in shootouts in the season. Attempts were made in the shootout Friday night by Casey Mittelstadt, Andrew Oglevie, and CJ Smith. Only one other team has been worst in the shootout with San Antonio shooting 1 for 24 in shootouts.

“It’s a moral victory for our team trying to get onto the right track,” Chris Taylor said about what the team was able to do Friday night. “You know, it’s one point. Anytime we get points we’re happy.”

The team has earned seven of a possible 24 points in the last 12 games, is in third place, and only four points up on the fifth place Laval Rocket. They’re also only four points out of first place. Whether or not there’s any moral victories in a five game losing streak (9 losses in the last 12) will depend on where you stand on the numbers versus the trends.

The team never lost more than three in a row last season. The last time they had a five game losing streak was from February 2 to February 11 during the 2017/2018 season.