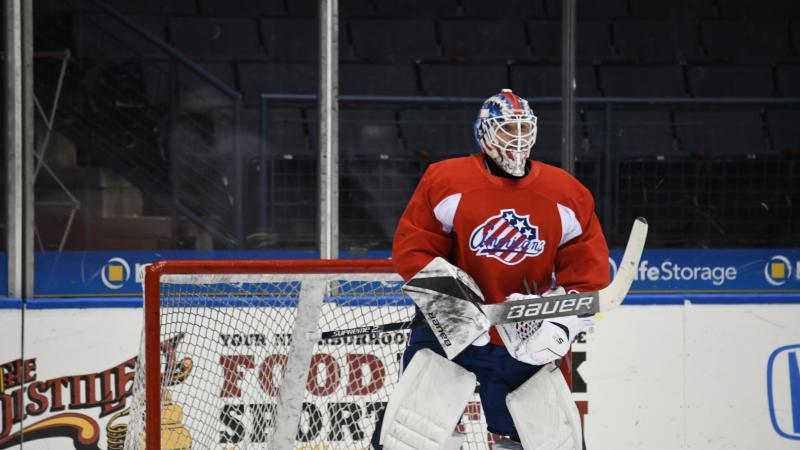 The Rochester Americans made a roster move Sunday morning by announcing that 20 year old goalie Ukko-Pekka Luukkonen has been called up from the Cincinnati Cyclones.

In 20 games with the Cyclones he has a 12-5-3 record with a 0.917 save percentage including three shutouts and a 2.12 goals against average. He was also selected for the ECHL All-Star game.

Luukkonen was also named the ECHL goalie of the month for November when he posted a record of 6-2-1-0 and a 1.88 goals-against average along with a .925 save percentage.

Updated.. Randy Sexton updated The Buffalo News stating that Luukkonen will spend one week in Rochester before returning to Cincinnati. The Amerks next game is Friday evening leading into a three in three. It’s all part of the process the organization had already set for the first year pro goalie.

Don Stevens had an interview with Seamus Kotyk, Sabres goalie development coach, in early December and Kotyk had the following to say about Luukkonen, “It’s gone as well as we can add draw it up or imagined for him. It’s been a challenging probably seven to eight months recovering from the double hip surgery and the rehab process. What I’m very proud of for Ukko is he had to make a lot of personal sacrifices over that time. You know missing time at home just to make sure he was doing what was needed medically and physically to get his body ready and to see him having success early, sometimes coming back from a long-term injury regardless of the position, you know, you could stutter for a while and it’s been fairly seamless. We’re really excited about that. He’s getting an opportunity to play a lot and that’s what we wanted and he’s just getting to get his game to the level he wants to get it to.”

The Cyclones have been playing with two goalies on the roster, Luukkonen and Michael Houser. Last week they traded Sean Romeo last week to the Florida Everblades for future considerations. It’s likely that Luukkonen only misses one game in Cincinnati.

As for the Amerks overall weekend, it was bad. A 5-1 loss Friday night followed by giving up a 4-2 lead and losing 5-4 Saturday night in Syracuse.