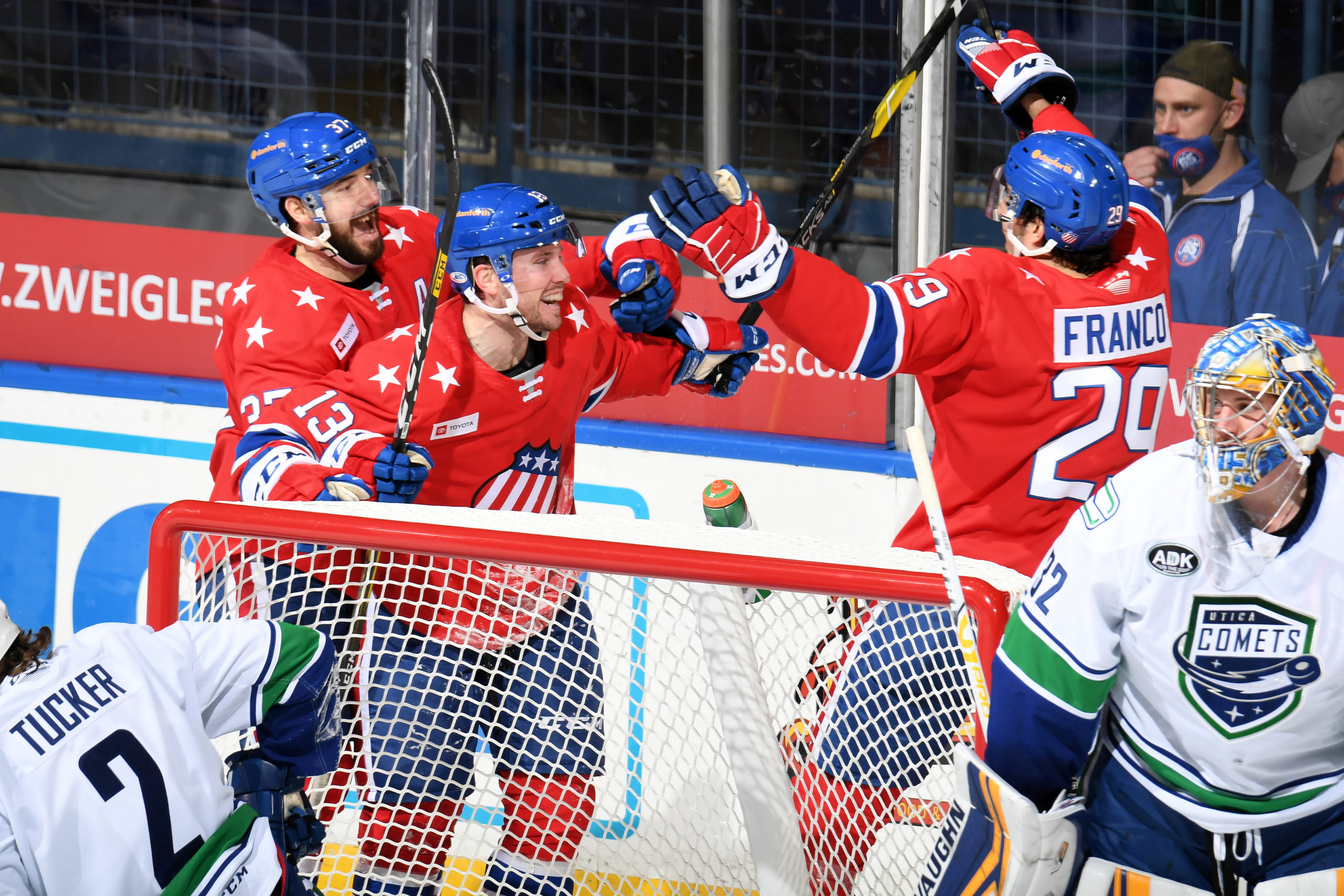 The Rochester Americans opened their 65th season with a 3-2 loss to the Utica Comets in an empty Blue Cross Arena. It was as surreal as one would think. A closed parking garage, no one preaching from the sidewalk before entering the building, an empty atrium, empty hallways, and no high fives from the Moose. But it was hockey and it’s amazing that the American Hockey League, ownership, and players are able to pull this off and play some games.

Everything in terms of game production still continued as usual. The PA announcer read off scratches, lineups, players were introduced, music between stoppages in play, and the national anthem was played before the game (pre-recorded). The only thing missing were the in game promotions. Who wants some chili? A sign that a promotion works, it’s talked about for years.

The inside of the arena looks the same as it ever has but has some updgrades on the inside everyone can experience when they return. The new sound system sounds crisper and cleaner versus stabbing you in the ears. There’s even guest WiFi throughout the building run off of Lighttower Fiber that averaged about 56Mbps download speeds. From the front of the building in the atrium towards the stage end it was a consistent connection. The bathrooms even have new faucets with new walls and doors. I didn’t check to see if the actual toilets were new. I know that no one else can experience these things right now but they’re positive improvements that were desperately needed.

As for the actual hockey, it was hockey. Seth Appert summarized in a simple way, “process, not outcome.” He added, “learn from the outcome, don’t hide from it. You own it.”

Rochester only played 10 forwards due to injuries, quarantine, and players up with the taxi squad so with all things considered there’s a lot to look forward to.

Veteran goalie Dustin Tokarski earned the start in net for Rochester and finished with 31 saves. Appert said that Tokarski earned the start and knew with the forward group he was going to have he wanted to go with the experience to start. Tokarski has won two Calder Cups, a Memorial Cup, and Gold at the 2009 World Juniors. Ukko-Pekka Luukkonen is going to get a lot of starts going forward but for the first game with this group the coach went with the veteran to lead the way.

Jacob Bryson is returning for his second season and wasn’t wrong to say, “I thought it was a great first game for this group.” Bryson continued where he left off last season and was a presence on every shift.

Utica is a team that the Amerks will play another 13 times this season and they’re a power house team with the lineup they wanted and they were able to wear the Amerks down. Kole Lind, Sven Baertschi, Sam Anas, Jonah Gadjovich, and the list can go on are quality players.

In a shortened odd 32 game season with a young squad it was a decent night on the ice. In the near future the Amerks will likely have CJ Smith, JS Dea, Remi Elie, and Jack Quinn to slide into the offensive lineup. There’s also rookie Brandon Biro who put up 109 points in college. The roster has had a lot of turnover, which is common every few years in the American League, and it still looks positive.

A lot of these players had never played a pro hockey game before and almost everyone had gone almost a full year without playing a game. That’s not an excuse, it’s simple truth and practice can never replicate the speed of a game.

An unlikely player, and would be fan favorite, Patrick McGrath scored the first Amerks goal of the season with assists to Dominic Franco and Mattias Samuelsson. I say unlikely because McGrath has only scored four goals in his previous 95 American Hockey League games played. In 162 games played in the ECHL he had only scored a total of eight goals. He’s not a goal scorer but as you can see in the clip he’s going to put in the work and he was rewarded. Great play by Franco as well in front of the net.

“I think we’ll grow. We have a young team,” McGrath said after the game. “I think we set a good tone tonight. We’re going to get more guys and moving forward I think we’ll do just fine.”

Arttu Ruotsalainen made his professional debut in North America and showed how he can be a lethal goal scorer. A head fake and pass by Rasmus Asplund to Ruotsalainen at the face off circle lead to the blast of a shot. The best comparison in recent years is to that of Victor Olofsson. The power play goal at 8:53 of the third period made it a one goal game but there wasn’t enough left to tie it up. Ruotsalainen finished the game with three shots and at least one post. The line of Steven Fogarty, Arttu Ruotsalainen, and Brett Murray was causing havoc in front of the Comets net during every shift throughout the game and will be a line to watch.

Arttu Ruotsalainen. What a release! Assists to Asplund and Bryson. pic.twitter.com/5toYqnzC13

Here’s the goals scored by Utica along with lineup info, lines, injuries, and post game interviews below.

*The tweet below was incorrectly labeled for Santini. Lukas Jasek had the assist.

Jonah Gadjovich from Steven Santini puts the Comets up 2-1. pic.twitter.com/kWoSjhPx9i

As everyone was heading for a line change Jacob Bryson was hanging out down low and setup Andrew Oglevie for a chance. pic.twitter.com/ml4p12fWJu