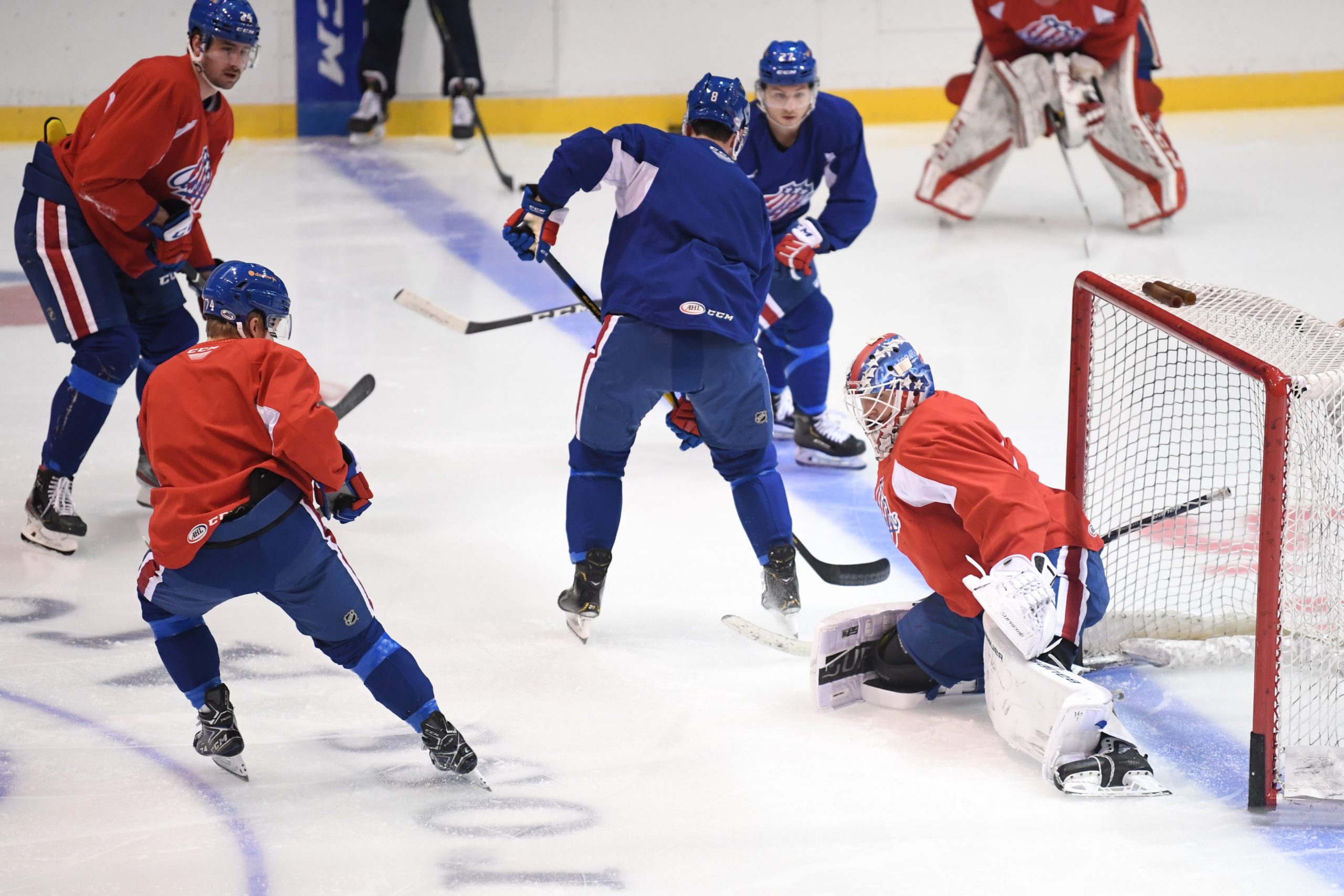 Welcome to most unusual opening night for the Rochester Americans as they start the 65th season. We’re all burned out reading about how things are unusual and that nothing is normal but it has to be said. To write like a 32 game schedule only playing against three other teams without any fans at home games is normal would be avoiding the odd reality of everything. With that out of the way, let’s get into a season preview of sorts.

A typical season preview has talked about off season moves building from the previous season and being a Calder Cup contender but that’s out the window as this will be the second season in a row that the Calder Cup will not be awarded. That doesn’t mean this is a throwaway season though with everything being a building block for the future.

“We want to be miserable to play against,” Appert has said. They want to be be a team that is competitive, fast, aggressive, and a passtionate team that plays for the City of Rochester.

The City of Rochester will be enjoying the games from behind screens this season but that doesn’t mean staff and players aren’t aware of the team identity in this city.

Appert will be teamed up on the bench with assistant coaches Mike Weber and Adam Mair. Weber played his rookie season in Rochester during the 2007/2008 season which was the final season of the Buffalo Sabres and Florida Panthers dual affiliation. Weber played 10 pro seasons in North America spanning 351 games in the NHL before finishing in Sweden. He coached two seasons with the Windsor Spitfires in the OHL as an assistant. Adam Mair played seven of his 12 pro seasons with the Buffalo Sabres before becoming a development coach.

The on-ice leadership group will be lead by Steven Fogarty as the captain along with Andrew Oglevie and Dalton Smith as assistant captains.

“Steven Fogarty first as the captain Emerged naturally,” coach Seth Appert stated after Thursday morning practice. “He’s a leader. He has this really strong presence about him. Very good command of the room. Extremely hard worker and great guy for the younger guys to look to.”

Fogarty was a captain in high school, in college at Notre Dame, and last season playing with the Hartford Wolf Pack.

Appert talked about Oglevie and Dalton Smith as assistants saying, “Guys that have been through the battles here in Rochester. Earned a lot of respect in that locker room through their work ethic, the commitment, and how they go about their business every day.”

Congratulations to the Amerks 2020-21 captains! â­

Previous leadership has all moved on from the organization. Last season Kevin Porter (assistant coach with Wilkes-Barre/Scranton Penguins) was captain along with Andrew MacWilliam (playing in Germany), Nathan Paetsch (retired), and Zach Redmond (playing in Germany) as assistants.

That’s it? Yes, that’s it for opening night.

Is this a roster that will make other teams think they’re miserable to play against? It’s possible. There’s expecations for Andrew Oglevie, Brett Murray, Arttu Ruotsalainen, Jack Quinn, and Rasmus Asplund to lead the way. The toughness will be there from Dalton Smith and Matej Pekar. Jacob Bryson is going to be a leader on the defensive unit in his second pro season and isn’t to be taken lightly.

Ukko-Pekka Luukkonen is one of the few players that has already played games this season and is one of the top goalie prospects in the world who’ll be looking for his breakout season.

Taxi Squad and the Changing Roster

Players that are on a NHL taxi squad are by contract status an AHL player. There’s an expectation that players can be fluid back and forth between the taxi squad and playing in AHL games. As long as players are in NHL testing protocol (and the NHL team isn’t quarantined) they can go back and forth.

Unless a situation happens again like this past week with the Buffalo Sabres.

Earlier in the week it was expected that Jack Quinn would be playing for Rochester tonight after he was assigned from the taxi squad but due to the situation with the Buffalo Sabres he was forced to go into quarantine. CJ Smith and JS Dea were assigned to the taxi squad last weekend and it’s possible they could’ve been back for tonight but again due to quarantine they aren’t.

Expect a lot of juggling like that this shortened season.

Want to keep track of the roster? There’s a page for that here! Visit/bookmark https://www.lga585.com/roster/

Everyone will have to admire the jerseys from watching games on TV or streaming but the team has some dedicated 65th anniversary jerseys to wear this season.

One of the ways the team is attempting to reduce covid risks is by limiting how players may live together as roomates. Things like goalies aren’t all living together and there’s one defenseman and one forward. If there is an issue where players need to quarantine the hope is that it won’t take out two defenseman or all goalies at once.

The only in person team bonding that will happen this season is when players are at the rink. There aren’t going to be dinners, large get togethers, hanging out, or any community involvement at this time. They’re embracing the time at the rink and making the most of it.

American Hockey League players spend a lot of time in the community with volunteer work and appearances but all of that is on hiatus until hopefully next season.

Blue Cross Arena isn’t open to any fans this season and will have limited media presence. The arena is essentially split in half with no one allowed on the bench side of the building that isn’t considered “in the bubble.” All in person interactions are on hold and with interviews being conducted through Zoom.

There’s only 32 games and against three teams. There’ll be 14 games vs Utica, 12 vs Syracuse, and six vs Cleveland. This is similar to many teams around the league, it’s not just Rochester playing a limited schedule.

Seth Appert has talked about the fact that there’ll be little teams don’t know about each other after playing three games. It’s expected that games will get chippy and rivalries will be intensified.

Schedules were based not only on limiting travel and eliminating hotel stays but also depended on what other teams were doing. Travel will be simple only going to Syracuse, Utica, or Cleveland. None of it is ideal and everyone knows that.

You can watch opening night around the league this weekend for free.

I’ve heard this asked many times by fans asking why even bother playing? What’s the point? Well, why not? The AHL and PHPA (Professional Hockey Players’ Association) reached an agreement earlier this week to play this season and teams have opted in. The purpose of this season is to keep players playing to not only help with their careers but also provide a pipeline for NHL teams as needed. Yes, it stinks that no fans are going to be allowed and there won’t be a Calder Cup awarded for the second season in a row but they’ve found a way to play.

Syracuse Crunch owner Howard Dolgon has hosted live streams at various times and has stated that a goal is to get through this season with as little damage to the league as possible and return full steam ahead for the 2021/2022 season.

Three teams have opted out of playing in the American League this season – Milwaukee Admirals, Springfield Falcons, and Charlotte Checkers.

American Hockey League players aren’t going to be earning full paychecks for this season but it’s a career that few will ever achieve and they aren’t going to pass it down.

It’s pretty simple to anyone outside of the playing bubble – enjoy it or don’t.

It’s hockey! Enjoy it. Players, coaches, and staff are putting everything into pulling off this season and they want to play hard and win. Some hockey is better than no hockey.

If the team finds a lot of success with winning games it’ll be an incredible accomplishment like it would be any other season. If the team struggles due to everything going on it’s only going to be a minor speed bump. Seth Appert has said what almost all other coaches have said, “winning is a part of development.”

Whatever happens this season in Rochester should not be considered a blue print for what the future holds.

It’s ok if the thought of a season without a Calder Cup isn’t your thing. Everyone knows it’s not ideal. If this is you just move on and watch more Netflix, go for a walk, or do anything else. Don’t get caught up in discussions one way or the other however it all goes.

When the week began, Seth Appert thought his first lineup as Rochesterâ€™s coach would include Jack Quinn.

Quinn was forced to quarantine. Two other Amerks are stuck on the taxi squad.

Welcome to life in the AHL this season:https://t.co/3dQmQEFEnY

How did the #Rochester #Amerks' Seth Appert grow from a backup goalie at @FerrisHockey into a head coach in @TheAHL?

With @amerkshockey set to start their 65th AHL season tonight, @steelopus is back with a preview of what will certainly be an interesting season – full of a lot of new faces, many of whom Sabres fans have been eager to see start their professional careers. https://t.co/6W51xD1YAw

After 11 months off, the Amerks drop the puck Friday.

Here's Jack Quinn, Ukko-Pekka Luukkonen, Oskari Laaksonen, coach Seth Appert and others on what to expect in a short, strange season. https://t.co/uVce75OM5O