We’re now in the month of February and this is the time of the season that teams make a push for the playoffs and determine how they’ll be able to play once in the playoffs. Â The NHL trade deadline is Monday February 27, 2012, just over three weeks away. Â There’s one position that the Amerks have started to gain some consistency and that’s in goaltender David Leggio. Â In two games he earned a shutout, overtime loss and combined 62 saves. Â Leggio had an outstanding 33 save shutout on Thursday night and then two of the three goals scored against him on Friday night were the result of the puck being redirected, can’t really blame the goalie on those. Â Now if only the Amerks could get healthy and possibly add a real scorer this team could start to make a better run.

The Amerks gained three out of four possible points in the standings so far this week which is acceptable looking at it that way. Â The Amerks started the night three points behind the Marlies but the Marlies beat the Crunch and increased the lead to four. Â Both teams have played 46 games.

In Thursdays game the Amerks looked like a team hungry and ready to go after the win and they did just that with a 3-0 shutout. Â Nick Crawford scored a goal 95 seconds into the game that turned out to be the game winner. Â Marcus Foligno fed a perfect cross ice pass to Crawford who beat Leland Irving. Â Phil Varone scored a short handed goal at 2:56 of the third period and then Travis Turnbull stayed focused and put in his own rebound on the power play at 16:01 of the third.

David Leggio was focused throughout the game with 33 saves for the shutout. Â Credit is also due to the defensemen who were able to keep the Heat away from the net and also clear the pucks as needed. Â Nick Crawford did an outstanding job clearing the puck from the crease that created the rush out of the zone for Varone to score short handed. 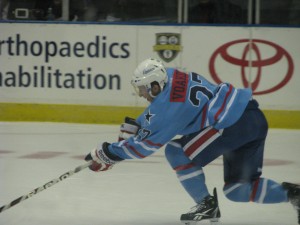 On Friday the team couldn’t connect a pass in the first half of the game if their careers depended on it. Â The team also didn’t start to build any momentum until halfway through the second period, after the Heat were already up 2-0. Â A late second period goal by Igor Gongalsky and a third period goal by Paul Szczechura tied the game before an eventual overtime shot by Clay Wilson won the game for the Heat.

The first goal of the game was credited to Akim Aliu of the Abbotsford Heat. Â The odd part about the goal was that Leggio argued it was a high stick. Â Kevin Oklobzija wrote that referee Francis Charron mentioned it went off of the glove of Nick Crawford. Â If that’s the case the goal should go to Clay Wilson who took the shot, not Aliu and it’s a good goal. Â Clay Wilson said it never went higher than the crossbar. Â Leggio said it did. Â Who’s right? Â We’ll never know. Â I doubt a high quality replay will ever be available.

Dustin Sylvester gave the Heat a 2-0 lead when he tipped another Clay Wilson shot down to the ice which then bounced over David Leggio. Â The goal was originally given to Wilson but it was clearly tipped. Â Not sure what Charron was watching on the ice but he didn’t seem to follow the puck closely on it’s path to the net each time.

The Amerks finally started to gain some momentum late in the second period with a number of great chances but they couldn’t find the net. Â Paul Szczechura and Maxime Legault had a great 2 on 1 break towards Irving but the Szczechura pass to Legault didn’t connect very well. Â Legault had another opportunity shooting at an open net but the puck went high. Â Travis Turnbull had a chance but couldn’t get the puck on the inside of Irving’s pad and shot it wide. Â Shaone Morrisonn had a point blank shot but Irving stopped him cold with a pad save. Â Paul Szczechura was even pushed on top of Irving at one point but no one had a shot on net at that exact moment.

Travis Turnbull took a shot on net from the half boards and the rebound directed right to Igor Gongalsky who was able to backhand the puck into the net to put the Amerks within a goal of the Heat heading into the third period.

Paul Szczechura tied the game 2-2 by burying pass from Phil Varone into the net. Â Varone was behind the net and sent the pass through the legs of a Heat defender to Szczechura who was skating into the slot at that moment.

The team quickly came back to life after that with shot blocking, clearing the puck and creating scoring chances. Â Whitmore blocked a shot at one point just putting his stick in the air on a shot. Â David Leggio made a save but the rebound fell behind him in the crease but luckily Voakes was there to clear it out. Â Travis Turnbull had a great short handed opportunity taking the puck to Irving to get off a shot but unfortunately couldn’t find his own rebound to bury it.

And then Derek WhitmoreÂ committedÂ a holding penalty at 18:19 of the third period. Â The Amerks were able to kill off part of the penalty in regulation but just as Whitmore stepped out of the box in overtime the game was over. Â Clay Wilson had just buried a shot on David Leggio to win the game 3-2.

The Amerks are off to Syracuse for a game at 7:30pm tonight to finish up this stretch of three in three games. Â The Crunch embarassed the Amerks with a 4-0 Â win last week, hopefully the Amerks have their Thursday team show up for the game.

David Leggio would be making his third start in three nights on Saturday but the only reason he shouldn’t start would be because of an injury. Â Otherwise he’s earned it.

The only new injury to report was that of Alex Biega. Â He was hit hard on Thursday night and left the game but came back to play the second and third periods. Â He missed the game on Friday night with a wrist injury. Â It doesn’t sound like it’s too deserve and is day to day.

Colin Stuart could be back as early as next Friday if everything goes well. Â Stuart could make a big difference with the offense these days on this team.