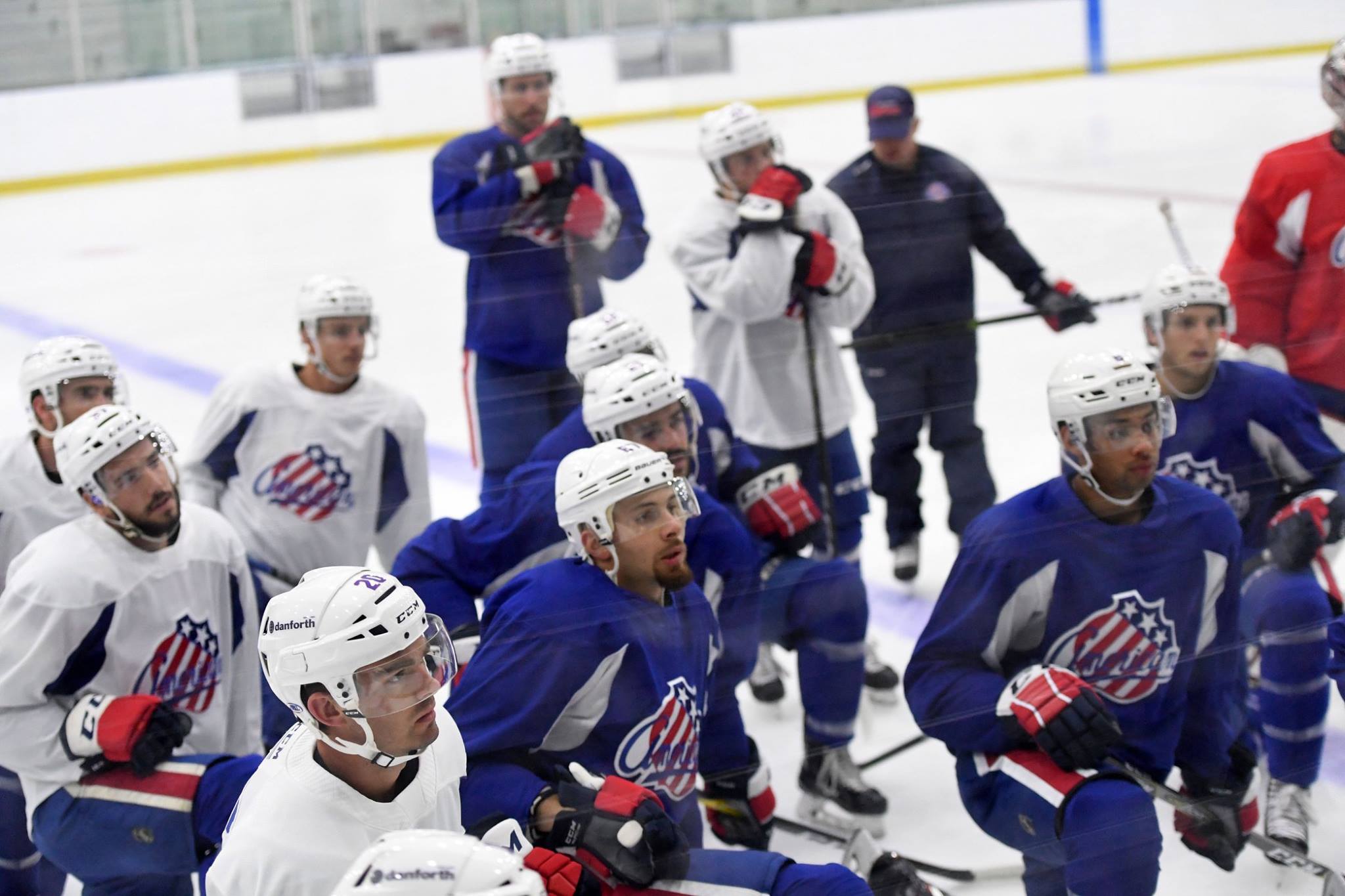 The first day of training camp for the Rochester Americans has passed us by and after talking to management and players the message is clear – the team plans to be tougher and grittier with a goal of winning a Calder Cup.

On the ice the practice wasn’t that different from any other practice on a Monday – fast paced, physical and over before you know it. It wouldn’t be fair to critique a player, a drill or what someone did or didn’t do on the first day. Right now it’s a mixed team that isn’t going to be playing regular season games together. At this point everyone has been skating either in Buffalo or at other pro skates with teammates elsewhere for a few weeks now. The days of training camp being the first time everyone gets together on the ice is a thing of the past.

The last time the Rochester Americans were together was for locker cleanout and exit interviews after being eliminated from the playoffs by the Syracuse Crunch. No one was happy with the way the series ended and was an eye opener for many in what it takes to compete in the postseason.

To move ahead you have to acknowledge the past.Â Chris Taylor said,Â “We’re going to have a lot of different changes. Obviously when you get knocked out like we did in the playoffs you have to change something.”

I asked what those changes would be he gave a classic reply of, “If I told you than other teams would know.” He has a good point.

He did elaborate to say, “We want to play faster and a little bit bigger. We’re going to use our size a lot more this year.”

Randy Sexton, Rochester Americans General Manager, shared the same message saying,Â “It was a goal of ours in the summer to get bigger, a little more physical and grittier. We don’t want to sacrifice skill or playing ability because the game has changed but certainly we want to be a team and organization that’s hard to play against. Not only because of our speed, skill and tenacity but also because of our grit and toughness. In the short term i think we accomplished that.”

Some toughness will be back on the roster with Andrew MacWilliam, Will Borgen and Dalton Smith just to name three players.

Sexton made a point to say, “Tyler Randell and Yannick Veilleux will be fan favorites once fans get to know them.”

Toughness and grit doesn’t equate to dropping the gloves and fights every night. Those days of hockey are a thing of the past. It was an early exit from the playoffs last season because of how relentless Syracuse was and Rochester just couldn’t keep up.

RIT graduate Myles Powell has made a name for himself in September after playing a physical role in the Sabres Prospects Challenge. Powell wasn’t officially signed until August 24 but he had an agreement in place at the end of last season to return. There was a big learning curve he wasn’t prepared for entering pro hockey but after the month of September he proved to himself and management that he’s deserving of being here.

A physical game might be surprising to some after seeing him play at RIT but Powell said,Â “I’ve always been a pretty physical guy but I didn’t really need to be in college. The more minutes you play it’s harder to keep that physicality up. Night in and night out it’s harder.”

Powell has accepted the role change from a top line forward to being a depth player where he can get the energy up and still have the opportunity to score. Whether Powell plays with the Amerks or Cyclones will all depend on how players are returned from Buffalo.

“The depth in the organization this year is greater than last year,” Randy Sexton said when talking about the roster. “That will help kind of funnel the type of organization where players and coaches will have to show up every and work hard to keep their positions. The depth in Buffalo will be better, the depth in Rochester and the depth in Cincinnati will be better. Players sometimes aren’t always comfortable with that but it certainly helps spur them on to enhance their development process.”

“Now we just have to put it all together with the systems we want to play,” Chris Taylor said.

Putting together systems for the defense is going to create a lot of options based on the depth available. Zach Redmond is back for two more season along with Andrew MacWilliam and Nathan Paetsch back for at least one more. Add in prospects like Brendan Guhle, Will Borgen, Lawrence Pilut and Brandon Hickey who’ll be joined by Matt Tennyson and Taylor Fedun to create a lethal blue line.

Don’t count Nathan Paetsch out yet, he is still enjoying playing professional hockey. After practice he said, “I’m having a blast, I still love doing it. You can see I’m smiling the whole time, I really appreciate still being able to play. It’s year 16 since I started here so I feel blessed to be able to keep going. As long as I can go I’ll keep going.”

The role hasn’t changed for Paetsch. He’ll play at his highest level to force others to be better along with being a mentor and making everyone around him better. Defensive depth chart is the deepest it’s ever been. Between Paetsch, Redmond, Tennyson, Fedun, MacWilliam and assistant coach Gord Dineen there’s over 1,000 games of NHL experience for the young guys to learn from. It’s doubtful another AHL team has that kind of defensive experience.

Randy Sexton spoke about how the coaches can relate to the success and failure that players may go through. He said, “Experiences, empathy and coaching skills will have a huge impact.” On the outside to the media the message is focused but behind the locker room doors there’s a massive amount of open and honest communication.

“Tayls has walked in the shoes that these young players are walking in so he can relate,” Sexton said.

I asked Randy Sexton if he still saw any opportunities for the potential roster and he said,Â “We’re always looking to improve. We’re excited about the guys we have and the guys we’re projected to have. On paper I think the team that we’ll have here will be one that our fans can be excited about, can be proud of and we’ll build on the foundation of last year. Our expectations are certainly higher than last year.”

When asked on day one what the long term goal of the season is Zach Redmond replied with, “A Calder Cup honestly. They stacked the team pretty good, they want to win. That’s what it’s all about and that’s what we’re here to do.”

One bit of roster news is that defenseman Brycen Martin has been loaned to the ECHL Maine Mariners. The 22yr old defenseman was drafted 74th overall in the third round of the 2014 NHL draft. He’s entering the last season of his entry level contract and will likely be his last under a Sabres NHL contract. In two pro seasons he’s played 19 games in the AHL w/ 0 points and 95 games in the ECHL w/ 18pts (4G+14A).

Training camp has started at Bill Grey’s IcePlex because the ice isn’t finished yet inside of Blue Cross Arena. It’s getting there! I stopped down in the afternoon to check on the progress.

And also caught a glimpse of the finished scoreboard up in the ceiling (no, it’s not above center ice).

The new scoreboard is beautiful. Currently tucked away safe and cozy in the ceiling. pic.twitter.com/FvAZ5Zrcyd

In case you missed it, here’s a look at what the roster could look like going into opening night: