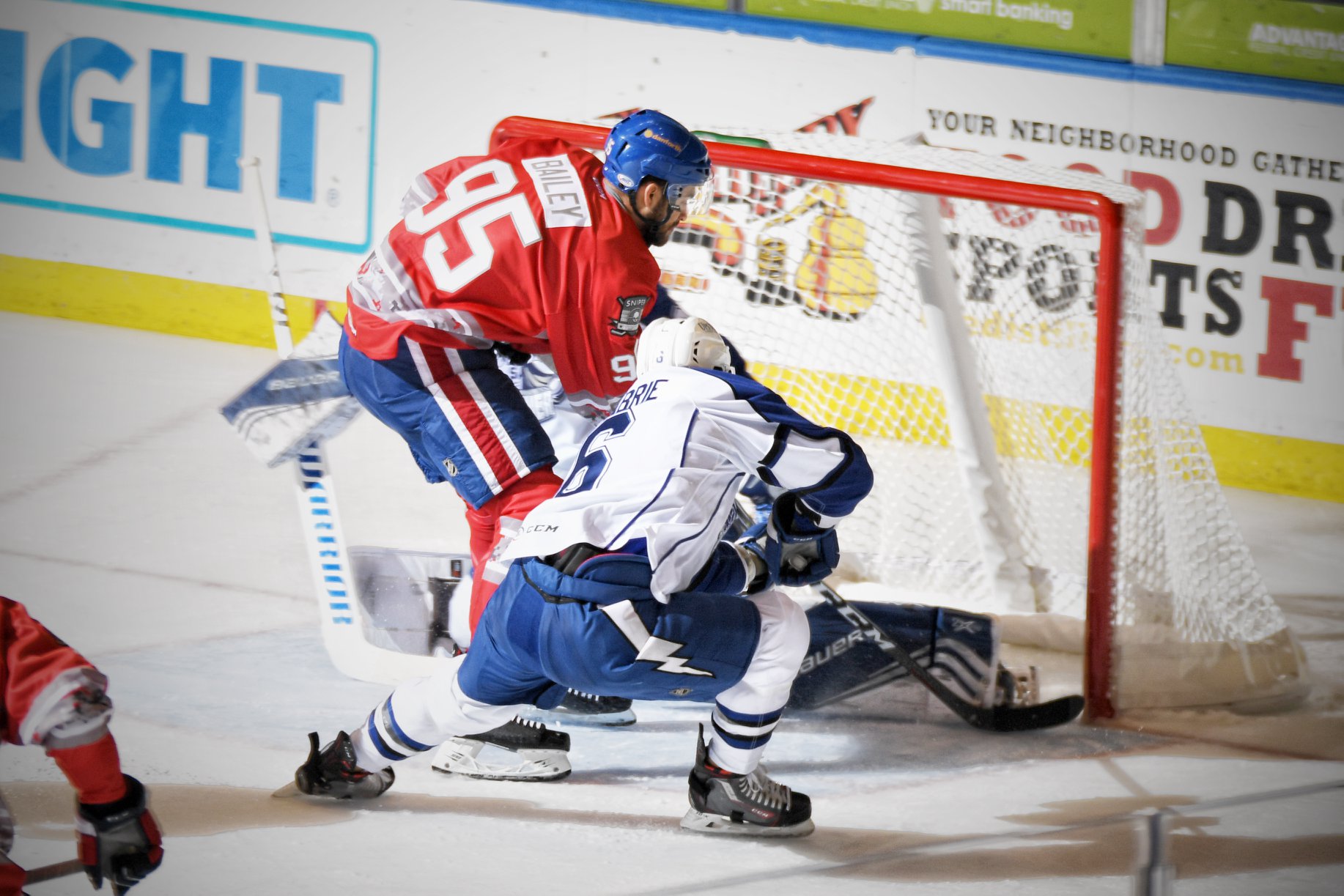 The key to success for an American League team is a mix of prospects, in-betweeners and veterans and those are the players that carried the Amerks to another win on Friday night in Rochester. Big plays from Alex Nylander, a burst of speed and goal from Justin Bailey and veteran defense Zach Redmond scored his league leading fifth game winning goal in overtime.

Justin Bailey played in 11 games without a goal this season before scoring three in his last two games by using his size and speed.

Syracuse turned the puck over in the neutral zone, Lawrence Pilut quickly sent the puck back to the neutral zone, Danny O’Regan gave it a poke and Bailey was off to the races. He took the defenseman wide, cut around him Cal Foote and slipped in behind Eddie Pasquale.

The message from Chris Taylor to Bailey has been to use his speed and take defenseman wide.

“He made a little joke about how smart he is when I got back to the bench after I scored.” Bailey said with a laugh, “He took full credit for it.”

Taylor had a small laugh when asked about taking credit and immediately said it’s not accurate and praised Bailey, “You can help players out but they have to execute and do their job out there and he did a great job.”

It started last season with players buying into the game plan the coaching staff has presented. They’ve told Bailey what he needs to do and in two straight games it’s paid off. He isn’t going to score on every rush but he’s creating much needed offense.

As Justin Bailey plays that role of in-betweener (still aiming for an NHL career, entering AHL veteran territory) there’s Alex Nylander who is playing his best season of his career so far as the young prospect.

Nylander has never been known as a player to get involved in scrums and for the first time on Friday night he was involved in one, not really by choice.

In a rush down the ice with the puck Nylander lost an edge as Crunch defenseman Cal Foote gave him a push. As he went down to the ice he crashed into goalie Eddie Pasquale and as that was happening a goal was scored by Andrew Oglevie, his first professional goal.

Pasquale landed on top of Nylander. Foote turned and started shoving Nylander down on the ice and continued challenging him into the corner. A first in his career.

“I had the goalie and some guy on me at the same time and I didn’t know what to do,” Nylander said after the game with a smile about the whole situation. “First time I’ve ever been in one of those scrums. I thought it was fun.”

A laugh and a smile is easy after winning a hockey game. “Yea, new element to his game,” Chris Taylor said with a laugh when hearing Nylander thought it was fun. “I’m sure it was fun for him, he doesn’t like the knicks on his nose though.”

The ref on the ice immediately signaled good goal at the start of the entire play and wasn’t reviewed. That’s baffling and it’s also baffling that there was only one penalty in the whole scrum and it was a misconduct onÂ Andy Andreoff for abuse of the officials. Strange.

There was a time this sequence of events would've turned into a line brawl. No video review, only one penalty – abuse of officials to #15 of the Crunch. pic.twitter.com/MIVyKPMNLO

Syracuse tied the game with 0.6 seconds left on the clock to send the game to overtime. After the game Taylor said it’s a learning experience playing to the buzzer.

Nylander put his name on the score sheet again at 2:37 of overtime when he setup Zach Redmond for the game winning goal. Nylander was thinking shoot but then he saw Redmond wide open. Redmond and Nylander pressured Ross Colton on the boards forcing a turnover, Nylander had the chance to shoot but the pass forced Pasquale to change positions and Redmond blasted in his lethal shot.

“I don’t know why they’re coming the way they are,” Zach Redmond said after the game. “I think the team that we have obviously and the positions the coaches are putting me in and the guys are setting me up pretty nice.”

A quick look at early season accomplishments for Redmond:

Adam Wilcox earned his fourth win of the season with 30 saves and has a record of 4-0-1 in six games played.

The Amerks extended their lead in the North Division to six points and lead the league in goals scored with 53. They don’t play again until Friday night which will give the players out injured time to return to health. They’ll play their first three in three with road games in Springfield, Providence and Hartford.

Here’s clips of the goal scoring…

I asked Taylor about this goal and he said, "That was o our defenseman, he should have retreated back in front of the net and I thought Alex did a good job coming back as much as he did." https://t.co/4NZyryparA

0.6 seconds left they say. Buzzer beater and the Crunch tied it up. pic.twitter.com/SIKjbtRarZ