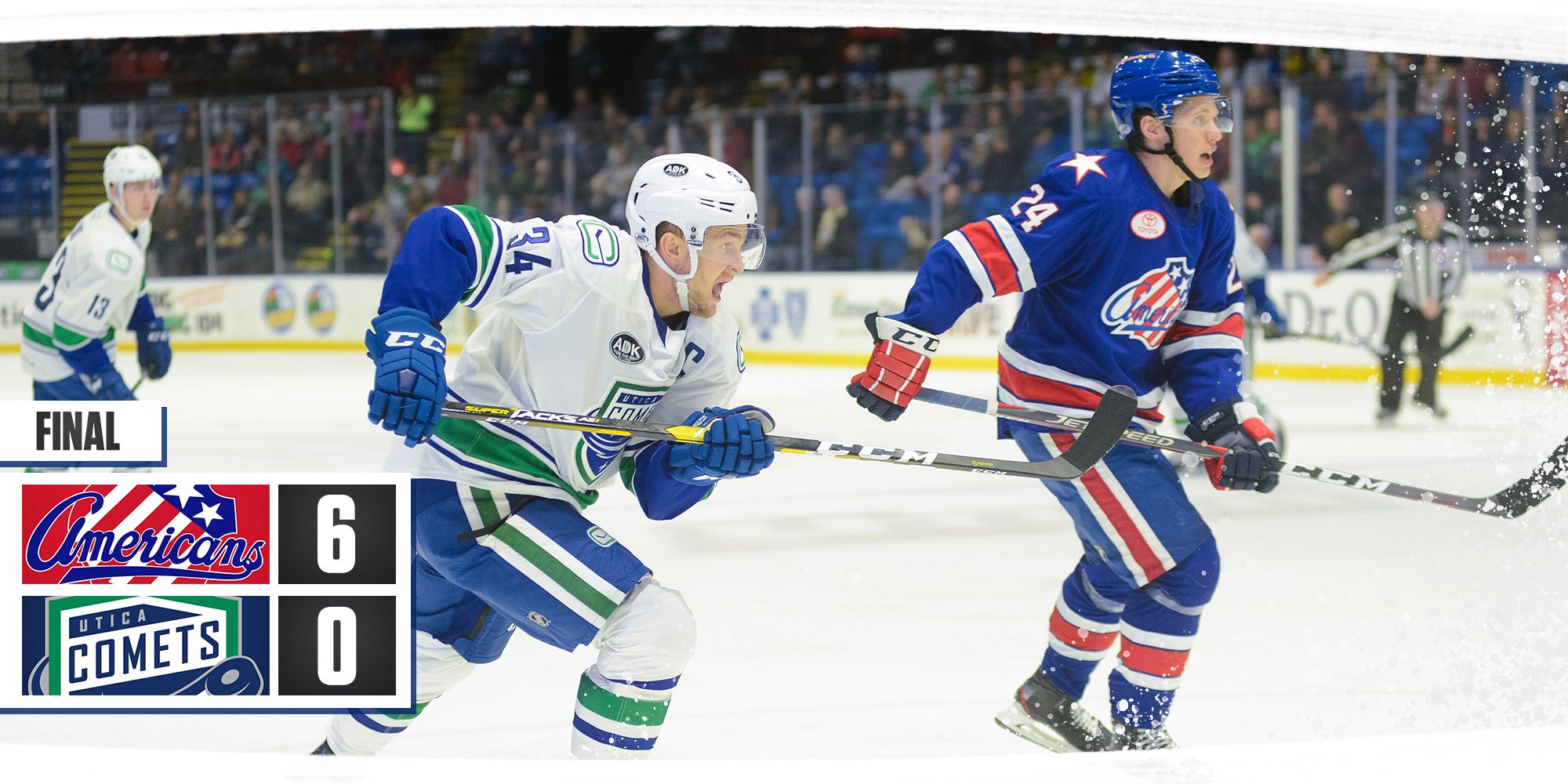 The Rochester Americans flipped the script Saturday night in Utica compared to their last visit by scoring six goals from six different goal scorers. The team scored two short handed goals, a power play goal, and three even strength. Andrew Hammond earned his first shutout of the season. Rochester last played in Utica on October 19 when they lost 7-1 in a game that went downhill after the first 10 minutes.

It may have been a costly win due to injuries. CJ Smith took a hit on the boards just three minutes into the game and had to be helped off the ice and didn’t return, couldn’t put any pressure on it. Zach Redmond didn’t play the final two periods. Unknown at this time what may have happened. Updates will be provided this coming week at practice.

Utica was the only undefeated team in the American League heading into the weekend. They must’ve run out of goal scoring. This was their second loss in a row, shutout in both. This wasn’t their best game and they were without leading goal scorer Reid Boucher.

Rochester took advantage of Utica’s short falls at every opportunity. Some of the bounces finally went their way as well. The penalty kill was perfect for the second game in a row and the team was one for five on the power play.

Brett Murray opened the scoring at 4:49 of the first period by skating around the back of the net and tapping in his own rebound.

Scott Wilson scored his third goal of the season (first short handed goal of the season for Rochester) at 15:41 of the first period to give Rochester a 2-0 lead. Casey Fitzgerald sent a clearing pass off the boards and Wilson was able to chase it down, pull goalie McIntyre wide, and score.

Rasmus Asplund put the Amerks up 3-0 with his first goal of the season at 18:59 of the first. Asplund crashed the front of the net and was able to back hand a rebound into the net. Casey Fitzgerald sent a pass from the corner to Tage Thompson who took the initial shot.

Curtis Lazar scored a short handed goal, his third of the season, at 4:07 of the second period to put the Amerks up 4-0. Lazar took off down the left side and fired a quick shot over the left shoulder of McIntyre. Assists to Remi Elie and Casey Nelson.

Tage Thompson scored the fifth of the night and his fifth of the season on the power play at 9:42 of the second. Thompson picked up a loose pack at the face off circle, spun around, fired a shot into the net. Assists to Lawrence Pilut and Kevin Porter.

After what felt like a lengthy review a sixth goal of the game was awarded to Jarrett Burton at 16:02 of the second. Casey Nelson sent a high shot from the blue line that trickled into the net off of Burton in front of the net. Remi Elie earned a secondary assist.

Andrew Hammond finished with 28 saves in his first shutout of the season and fifth win.

Rochester only plays once over the next 10 days which is next Friday the 8th when they host Binghamton. The Buffalo Sabres are off to Sweden tomorrow. The light schedule was likely setup to accommodate for the Sabres taking any extra players along for the trip.

Goalie Sean Romeo was signed to an American League PTO prior to the game. He has been with Cincinnati on an ECHL deal.

Injured: Dalton Smith (day to day) and Taylor Leier (indefinite). It’s worth noting that Leier has started skating with the rehab coaches.

Brett Murray puts the Amerks up 1-0! Took the shot, around the net, tapped it in. pic.twitter.com/OdTAB2Q7Lt

Another look at the Scott Wilson goal. pic.twitter.com/gklt1PfW62

Rasmus Asplund puts the #Amerks up 3-0! His first goal of the season. Assists to Thompson and Fitzgerald. pic.twitter.com/EuJPm6jysK

It's good. Jarrett Burton puts the Amerks up 6-0! Assists to Nelson and Elie. pic.twitter.com/1MNEuTXCkw