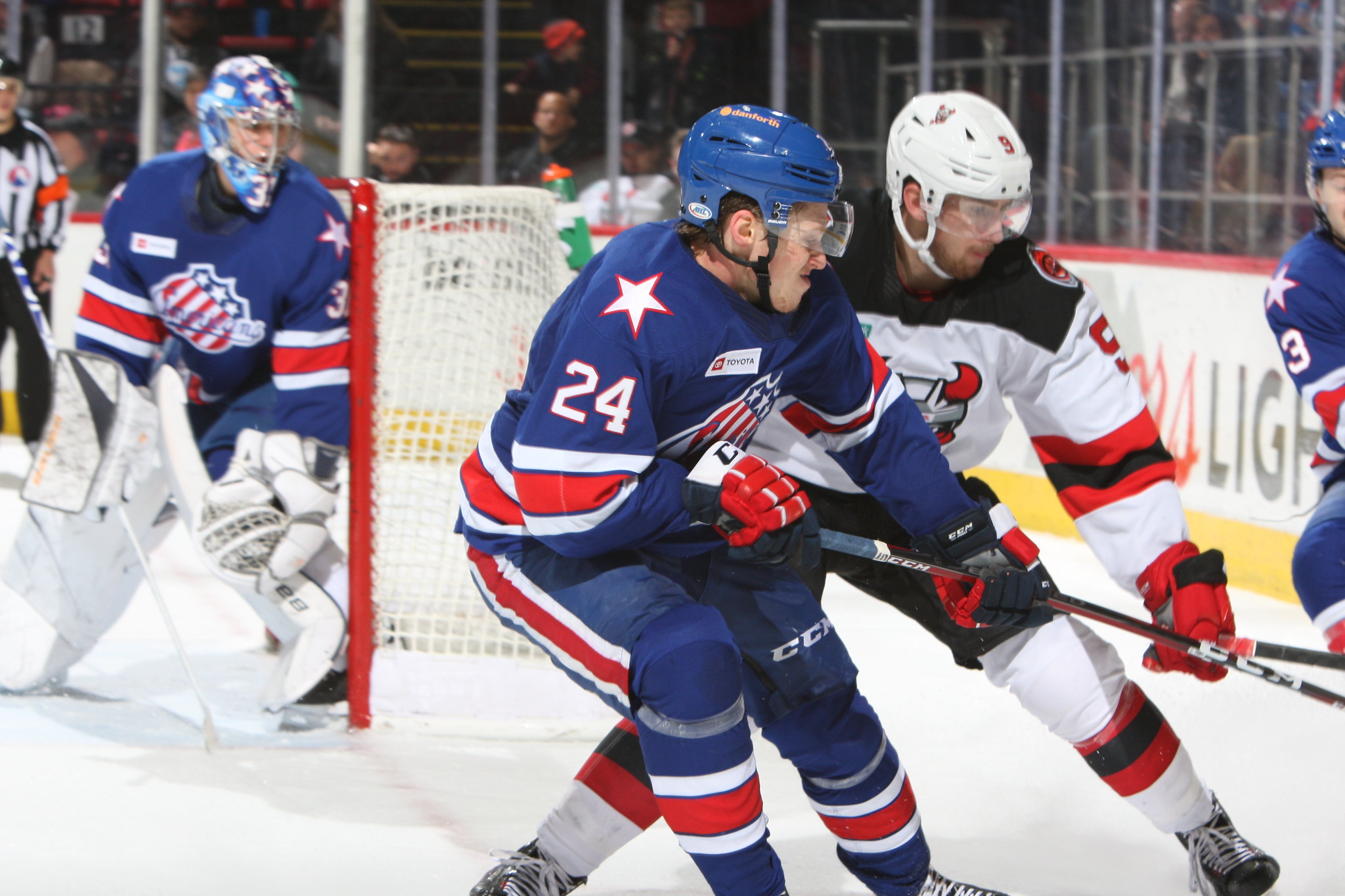 The Rochester Americans extended their winning streak Saturday night to five games with a close 4-2 win on the road against the Binghamton Devils. The game didn’t match the best game of the season from Friday night but a strong team effort for 57 minutes allowed them to hold on for the win. John Gilmour made his season debut with the Amerks and tallied an assist on the game winning goal from Eric Cornel.

Kevin Porter opened the scoring with a goal just 1:32 into the first period giving the Amerks another fast start to a game. Porter redirected a shot at the point from Lawrence Pilut. Will Borgen earned the secondary assist with a quick pass to set the play up. Pilut is on a four game point streak with 6 points (1G+5A).

Up until the final three minutes of the first period the Amerks were dominating as they have all season. Lawrence Pilut took a holding penalty and the Binghamton Devils took advantage of the power play chance. Joey Anderson, like Porters goal, redirected a shot from the point and tied the game 1-1 with 2:22 left in the first.

Brandon Baddock scored with 20 seconds left in the first period to give Binghamton a 2-1 lead. Eric Cornel was unable to clear the zone at the blue line which resulted in a turnover. Baddock slipped the pick through the five hole of Jonas Johansson.

After stumbling at the end of the first the Amerks rebounded and took over the second period.

Tyler Randell scored his third goal in five games to tie the game 2-2. Sean Malone did what Sean Malone does really well which is creating turnovers in the offensive zone and setup the opportuntiy for Randell. A quick shot by Randell from the face off dot beat Corey Schneider. That’s the same Corey Schneider that the New Jersey Devils recently waived and sent down to Binghamton.

Eric Cornel scored his third goal of the season at 8:26 of the second period to give Rochester a 3-2 lead. John Gilmour earned his first point as a Rochester American setting up the quick pass, pass, shoot play. Gilmour sent a pass cross ice down low to Scott Wilson who quickly sent it to Cornel for the one touch goal.

The third period was a nail biter with Binghamton leading 19-7 in shots and that’s an accurate portrayal of how the period went. Rochester could barely get out of their own end but they played defensively limiting the chances and relied on Jonas Johansson to finish the game strong.

Jonas Johansson finished the game with 34 saves for his fifth win of the season.

This was the fifth straight win for the Amerks and keeps them tied for first place in the North Division with the Toronto Marlies.

Casey Fitzgerald moved up to forward replacing Shaw Boomhower who was scratched. He’s the third defenseman to play as a forward this season joining Nathan Paetsch and Brandon Hickey on that list.

The way the Amerks are winning is impressive and fueld by some point streaks from various players. Here’s quick run down:

Rochester remains tied with Toronto for first place in the North Division and also tied for best 5v5 team in the league with both teams having a +20 goal differential.

Goals in gifs as they were sent out in Tweets:

Kevin Porter gives the Amerks a 1-0 lead just 1:32 into the first. Assists to Pilut and Borgen. pic.twitter.com/RzwHVoTHVs

Joey Anderson tipped this one w/ 2:22 left in the 1st on the PP. Tied the game 1-1. pic.twitter.com/vbw5aYSFiu

Brandon Baddock put the Devils up 2-1 with 20 seconds left in the 1st. That was Eric Cornel who tried to clear the zone. pic.twitter.com/Ku3DyrzHG8

Tyler Randell scores again!! Amerks tie it up 2-2. Sean Malone gets the assist. That's his 3rd goal in 5 games. pic.twitter.com/Z3e5MYkqLM

Randell is leading the team in scoring chances lately. pic.twitter.com/93QL2UMlsO

Andrew #oGOALevie secures the win with an empty net goal. #Amerks win 4-2 and extend the winning streak to 5 games. pic.twitter.com/mZLhdcZwpp