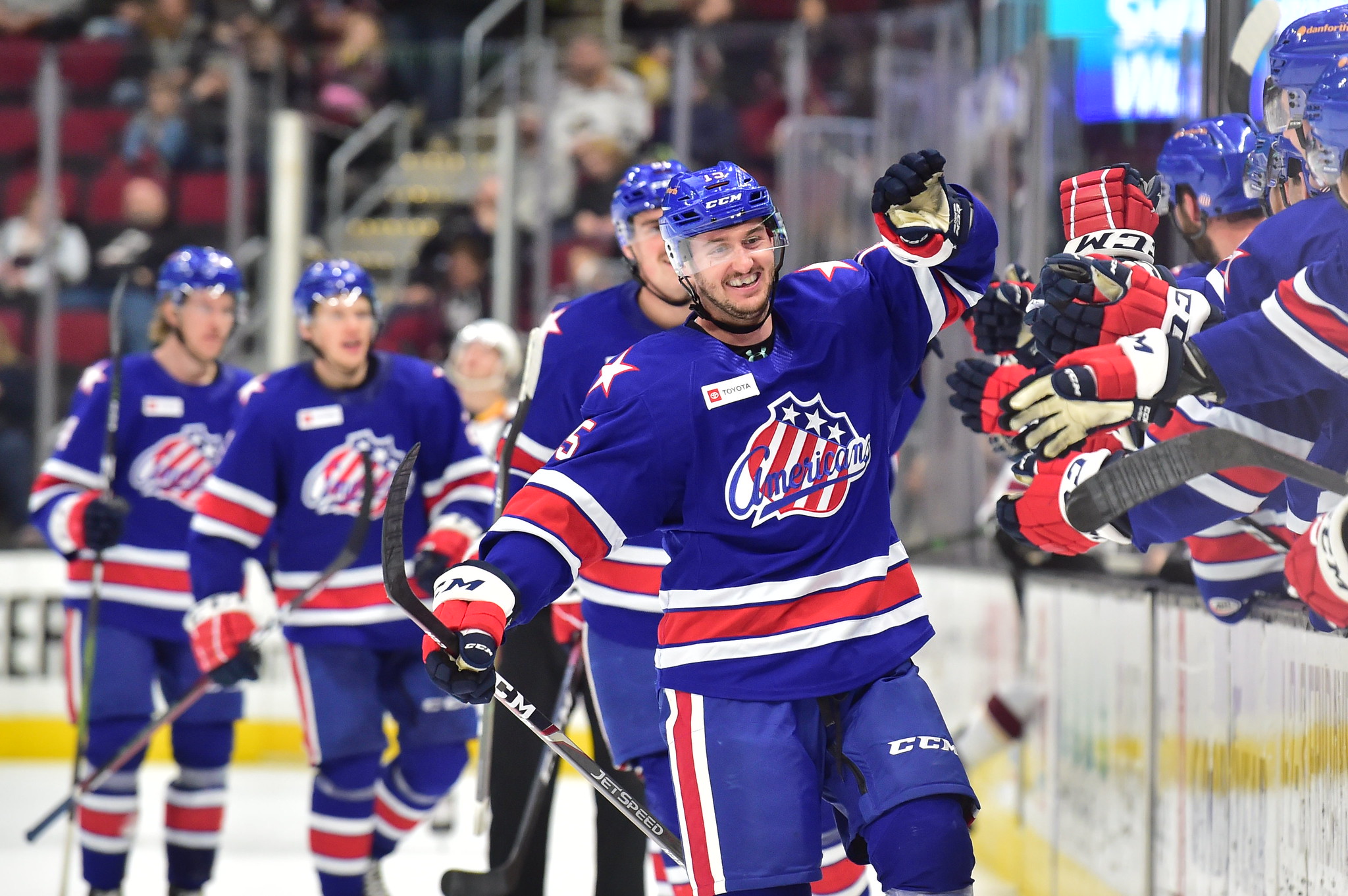 Andrew Oglevie took control of the scoring Saturday night in Cleveland scoring his first career pro hat trick and leading the Rochester Americans to a 3-2 road win. The Amerks finished the month of November with a record of 8-0-1-1 which is a 10 game point streak. The last time the team lost in regulation was October 30th. Jonas Johansson finished the game with 20 saves for his sixth win of the season.

The game started with a quick goal from Cleveland just 25 seconds into the first period by Kevin Stenlund. A quick release from the slot beat Jonas Johansson stick side.

Andrew Oglevie scored his first of the game at 7:58 of the first period on the power play. Lawrence Pilut took a shot off a pass from Kevin Porter and Oglevie tipped it in front of the net.

Rochester started the second period on the power play and Oglevie struck again just 32 seconds into the period. The goal was text book taking advantage of second and then a third chance. A Brett Murray shot went off the far post, Kevin Porter took a shot, and then Oglevie was in front to score on the rebound and third chance.

Overall through 20 games the Amerks power play is at 13.8% but when you look at just the last seven games it is at 27.3%. The improvement started with the five game winning streak and the return of Lawrence Pilut from the trip to Sweden with the Sabres.

Cleveland tied the game at 5:57 of the second period with a goal from Dillon Simpson on a fast rush into the Rochester zone. Simpson went to the front of the net and redirected a centering pass through the five hole of Johansson who was sliding across.

Oglevie scored his third of the game to complete his first pro hat trick at 4:49 of the third period by scoring off of a second chance and what looked like knocking the puck out of mid air in the crease. Brett Murray had taken the initial shot and the rebound was there for Oglevie to take advantage of. Kevin Porter earned another secondary assist on the play.

That line has extended their individual point streaks and continues to be the best scoring line on the team right now.

Cleveland had a power play with 5:07 remaining in the third period and the penalty kill came up big only allowing two low chance shots on net. The penalty kill finished 4/4 in the game.

Rochester is now 9-1-1-2 against North Division teams this season. They’re also 5-1-0-0 when tied after two periods. The only team in the league on a better run right now is the Milwaukee Admirals who are on an 11 game winning streak.

The Amerks play the next three games at home starting Wednesday with a rematch against Toronto. They’ll be home Friday and Saturday hosting the Charlotte Checkers.

Another gritty character win for this group of players. While JS Dea and Curtis Lazar have spent two nights in the press box with the Buffalo Sabres the Amerks again played with 10 forwards and 8 defensemen. There’s nothing ideal about this lineup other than the fact that it’s working and they’re beating teams.

Highligths sent out as gifs in Tweets:

Whoa a power play goal! Andrew Oglevie gets the tip and ties the game 1-1. pic.twitter.com/CBv9ZHJeLr

Taking advantage of a third opportunity. Andrew Oglevie scored his 8th of the season. Assists to Porter and Murray. pic.twitter.com/lcgSF3kNdV

Slipped down the middle and the simple redirect. pic.twitter.com/SCpsVQCZPg

Kevin Porter was like nope, you're not throwing me through the glass. Here, you eat it. pic.twitter.com/YVfMjIPERz