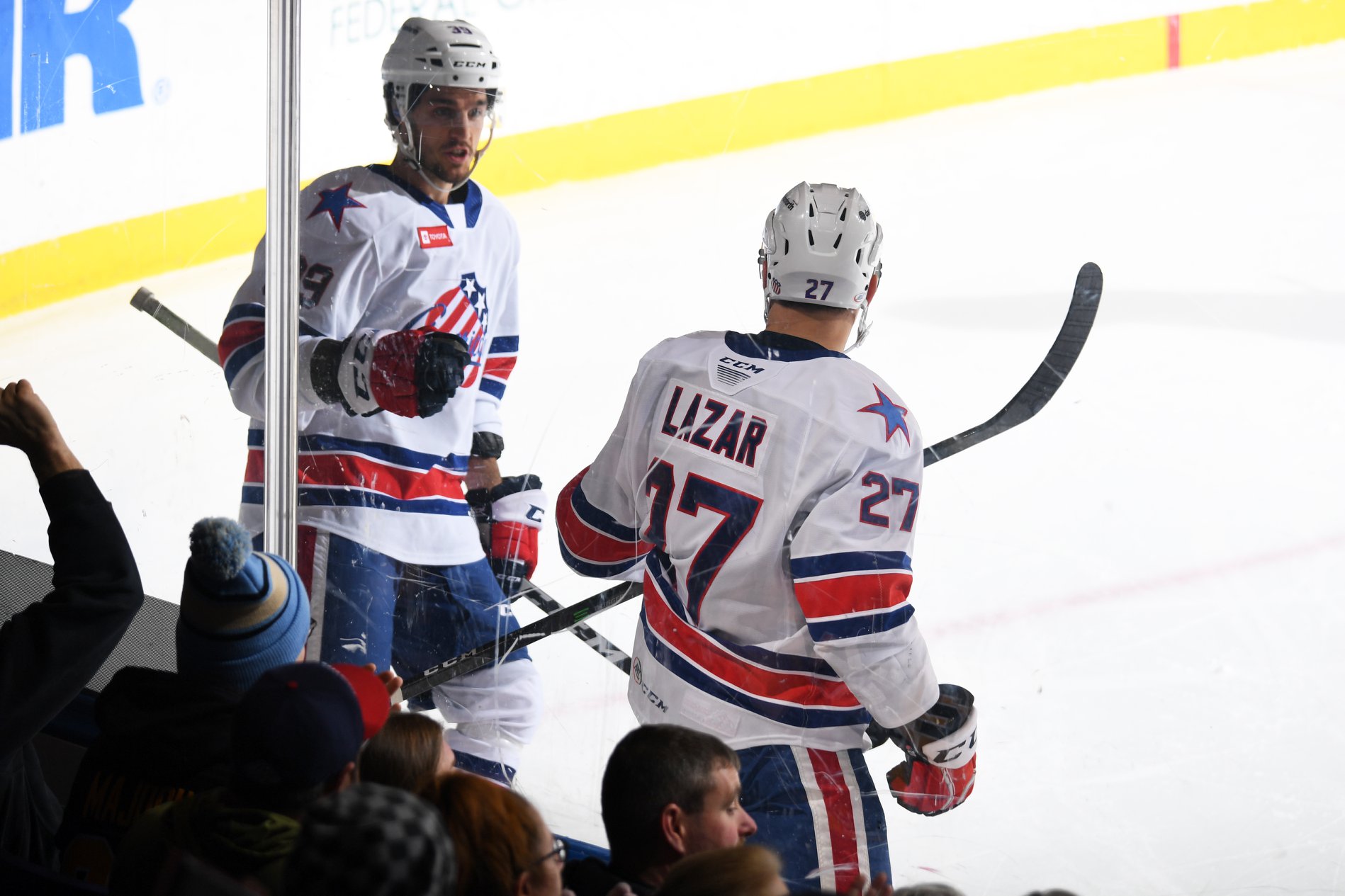 Another one bites the dust. That’s the song that has played after every Rochester Americans home win and it was played again Wednesday night after the team held off the Wilkes-Barre/Scranton Penguins by a score of 4-2. The Amerks improved to 16-4-2-2, they’ve won 11 of their last 14 games, and so far this season they’ve earned points in 20 out of 24 games.

“It’s our structure I think. We understand the importance of playing strong defense first and it’s leading the offense,” Curtis Lazar said after the game on how they’ve been doing it. “I think you see that in our goals. They’re hard working goals, guys aren’t taking shortcuts, they’re not cheating the game. We have to keep it that way throughout the season.”

Lazar scored the only goal in the first 20 minutes with a quick shot at the top of the face off circle. Will Borgen earned the primary assist creating the rush and Andrew Hammond had an assist as well touching the puck off a Penguins dump in.

It was a competitive first 20 minutes with Rochester having a 9-8 shot advantage.

“I think it helps putting one in the back of the net early in the game and your confidence rises,” Lazar said after the game.

The team also won with the help of three players returning from an injury. CJ Smith missed the last 10 games, Jarrett Burton missed the last nine, and Taylor Leier played his first game of the season after off-season shoulder surgery.

CJ Smith talked about getting back in the lineup, “It makes it a lot easier just knowing that the guys have been playing well and there has been a lot of chemistry so there isn’t a lot of pressure on any one player specific when you just know everyone is going to do their job. We’ve been playing well so it helps when you haven’t played in a long time.”

“Just keeping a positive mindset,” is what CJ Smith said about the toughest part about being out. Also added, “It’s tough when you come back in the locker room and everyone is fired up after the game and you kind of feel like you didn’t help out.”

JS Dea gave the Amerks a 2-0 lead at 7:17 by stealing the puck off the blade of Zach Trotman and beating Casey DeSmith. Dea had broken his stick earlier in the sequence and was able to go and retrieve a new one while Curtis Lazar and CJ Smith earned assists by controlling the puck in the offensive zone.

Taylor Leier returned and had a grade A scoring chance late in the second period but was robbed by DeSmith getting a piece of the shot. On getting ready for his return Leier said, “there’s been a lot of bag skates, a lot of practice time, and a lot of work behind the scenes to get me ready for this point and it was just great.”

A competitive first period lead to the Amerks dominating the second period with a 13-4 advantage in shots.

Chris Taylor said, “I thought we could have been up a lot more tonight, I thought we missed some really good opportunities.”

Andrew Oglevie scored his team leading 10th goal of the season redirecting a shot from the blue line by Casey Nelson. Kevin Porter earned a secondary assist on the goal.

Wilkes-Barre/Scranton was down by three goals but that didn’t stop them from trying to get back into the game. They pulled the goalie with just over six minutes left in regulation. CJ Smith took advantage with an empty net goal to put the Amerks up 4-0.

It should have felt like a secure win but credit to the Penguins, they were still trying to win although it was a little bit too late.

Jan Drozg ruined the shutout for Andrew Hammond by scoring with 3:37 left to play in the third. Sam Miletic scored with 1:57 left to play in regulation to get the Penguins within two. The late goals and two goal difference made it a close game after Rochester dominated for the first 56 minutes.

Lazar on the end of the game, “It’s a tough league to win. Any team has a chance. We let off the gas a little bit there at the end. It’s a good learning curve for us. We want to work out those kinks now because we were taking it to them for a good part of the game but we have some areas to clean up.”

“We didn’t like the last couple of goals we gave up but overall I think it was a strong effort,” Chris Taylor said about the game.

Should it be concerning the wheels fell off a little bit in the last four minutes? It’s something to be aware of and the team talked about it after the game. File it away in the learning curve column and move on. Credit the Penguins for not backing off as well.

The Amerks next three games are on the road. They travel to Laval to play Friday and Saturday and then head to Binghamton next Wednesday.

Casey Fitzgerald remained in the lineup as a winger due to the veteran rule. A team can only dress six veterans, one player with 260 or more games, and five players with 320 or more pro games. The veterans in the lineup were Kevin Porter, JS Dea, Curtis Lazar, Taylor Leier, Zach Redmond, and Dalton Smith. The healthy players are Tyler Randell, Nathan Paetsch, and Brandon Hickey. The first two are also veterans.

For another perspective on the game here’s a post over at Chirps from Center Ice, a Penguins blog – [ Outclassed â€” Pens LOSE 4-2Â ]

Highlights in gifs as they were Tweeted…

Borgen to Lazar and the #Amerks are up 1-0! pic.twitter.com/9Y6oBIroYU

JS Dea went to the bench to get a new stick and got back into the play to score on this chance. Amerks up 2-0. pic.twitter.com/jWypJJIEYo

Here's the elbow from earlier in the 2nd period by Erkamps on Fitzgerald. pic.twitter.com/QkEBE6OhRg

DeSmith got a piece and robbed Leier. Another great chance. pic.twitter.com/x6X824UGFK

DeSmith got a piece and robbed Leier. Another great chance. pic.twitter.com/x6X824UGFK

Turn your body to skate in front of a freight train and draw a penalty. pic.twitter.com/JZZu3TmuUF

Andrew Oglevie scored his 10th of the season and gives the Amerks a 3-0 lead! Redirected the shot by Casey Nelson. pic.twitter.com/sPFCkuRSZ0

Bold move pulling the goalie with over 6 mins left. CJ Smith scores to put the Amerks up 4-0. pic.twitter.com/C6SQyxKYmF

Pens get within 2 with just under 2 to play. pic.twitter.com/52E9ZJHyL4

Big save for Hammond and Pilut takes a few rights from Blandisi to draw the penalty. pic.twitter.com/AUDN46hXhn