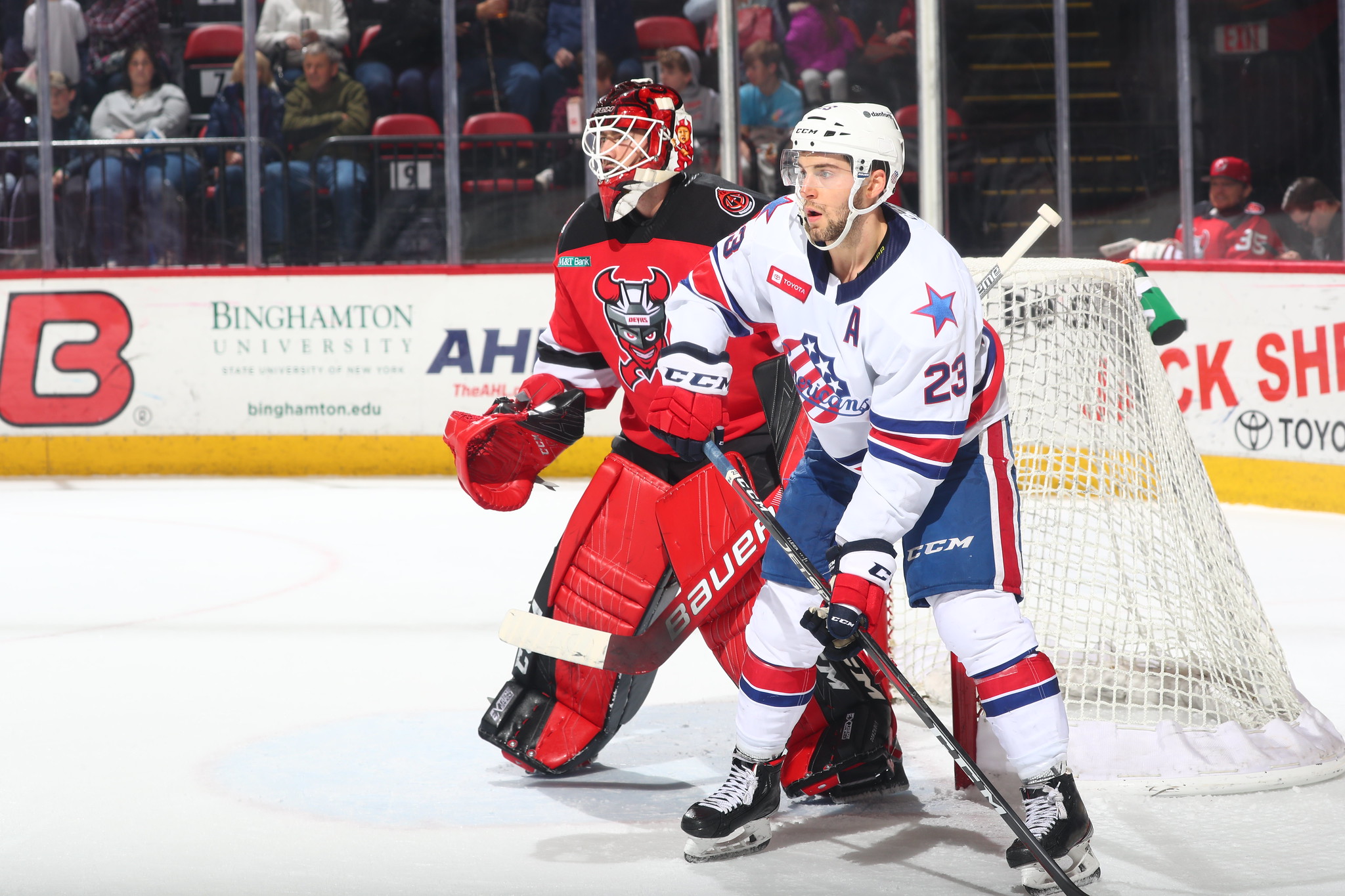 After a thrilling home ice win the Amerks travelled to Binghamton where they were shutout 2-0 by Louise Domingue and the Binghamton Devils. It’s the second loss to Binghamton in a week and a half for this Rochester team.

Louise Domingue made 32 relatively easy saves in holding the Amerks off of the scoreboard to earn his first shutout of the season. He was activated off of injured reserve by the New Jersey Devils earlier in the day and assigned to Binghamton.

Fabian Zetterlund scored both goals in the game for his fifth and sixth goals of the season. The first goal was a shot off a cross ice pass from Nate Schnarr. The second goal was a snipe from just below the face off dot while using John Gilmour as a partial screen.

Both goals were scored on the defensive pairing of Will Borgen and John Gilmour, their second rough game in a row. While they stand out as a weak point in the defensive zone they didn’t get much help offensively. There was very little offensive pressure from Rochester playing five on five or on the three power play opportunities. The 32 shots on net looks better on paper than they did in the game with 22 of those coming from above the hashmarks.

There’s just something about this Binghamton team more than any other team that continues to give Rochester recent trouble. The good news is that they’re the only team and Rochester remains in first place in the division and conference.

The only highlights for Rochester were two fights. One from Dalton Smith and another from Scott Wilson. Dalton Smith did miss the second period after the fight but returned for the third.

CJ Smith had left the game early Friday and didn’t play Saturday. Don Stevens mentioned during the broadcast that it was due to an illness.

Casey Mittelstadt finished with four shots on net and was a minus-2. Through five games he hasn’t looked bad but he also hasn’t looked like a first round draft pick with over a full season of NHL experience. He’s in the American League to improve and there’s a lot of time for that to eventually happen. The minus part shouldn’t be held against him in this game.

One side note unrelated to the game: After the Christmas break in the American League the home team switches to the dark color jerseys at home. Rochester wore their whites two nights in a row. Belleville had chosen to only bring their darks on the road which is why Rochester was in white Friday night. Going forward until the end of the season Rochester will wear their blue jerseys at home.

Here’s the two goals followed by the fights from Dalton Smith and Scott Wilson.

Might be time to breakup the pairing of Borgen and Gilmour. pic.twitter.com/MhmHEZTzkY

In case you missed it earlier…