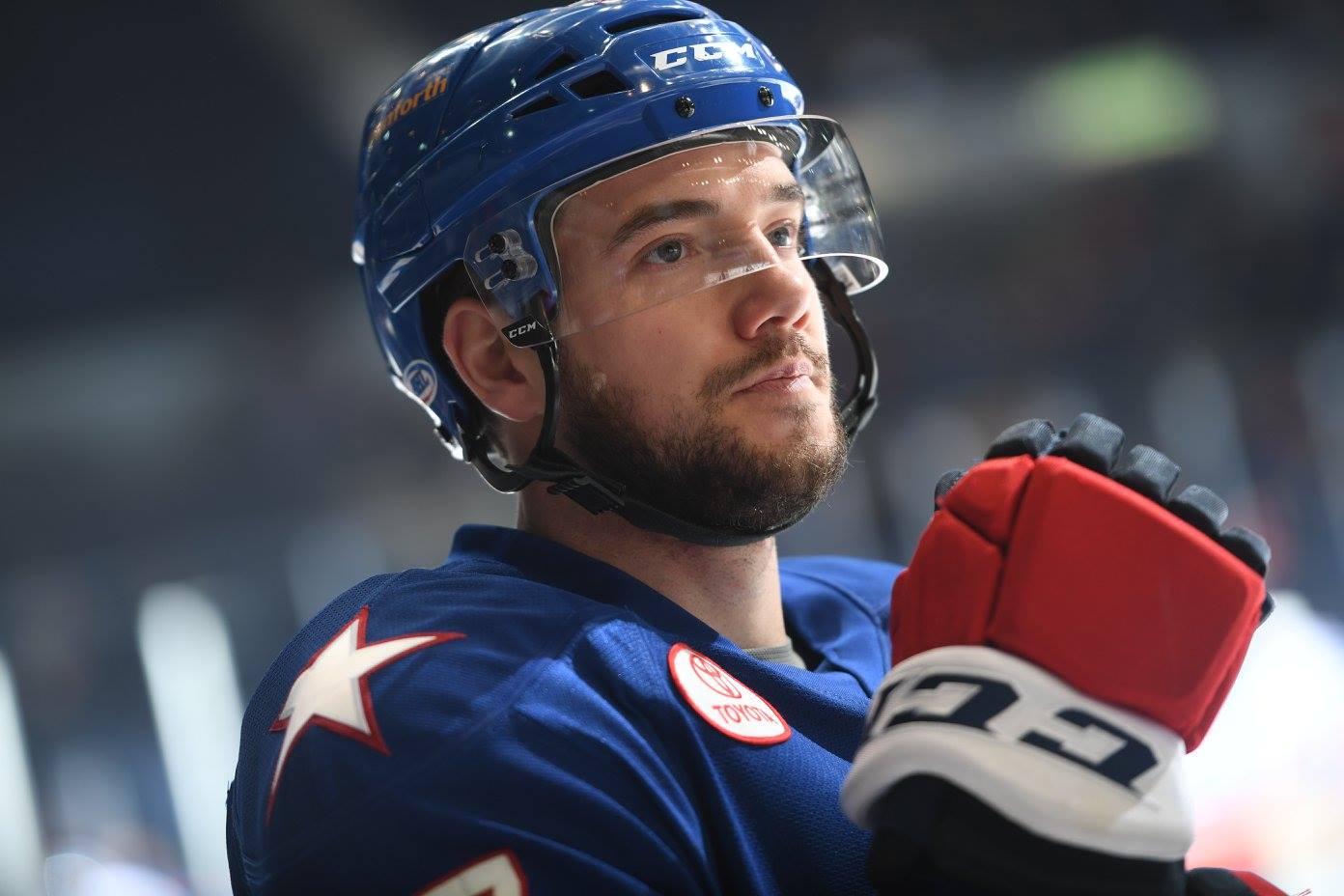 The Buffalo Sabres surprised everyone Monday morning when they announced that they signed forward Dalton Smith to a one year, two way contract. The deal is worth $700,000 for the remainder of the 2019/2020 season. After signing the contract he joined the Sabres on the ice for practice.

Dalton Smith has played each of the last three seasons with the Rochester Americans appearing in 114 games so far with the team. He reached the milestone of 400 professional games over the weekend. Through his 114 games with Rochester has has tallied 14 points (4G+10A) and 240 penalty minutes. Last season the Amerks had a record of 33-15 when he was in the lineup and 13-15 when he wasn’t. That wasn’t all just a coincidence. He provides more to the game than just fists.

He was drafted by the Columbus Blue Jackets in the second round, 34th overall, in the 2010 NHL draft. Out of nine players drafted by the Buffalo Sabres in 2010 there was only one, Mark Pysyk, that played in the NHL and is still playing.

“Iâ€™ve been pinching myself every once in a while. But, yeah, itâ€™s been unbelievable, something Iâ€™ve been waiting for for a long time,” Smith said about the news. “Iâ€™m just very grateful for the opportunity and excited to work as hard as I can and see what happens.”

Smith was asked if he knew it could happen and he said, “They expressed a little bit of interest but it’s definitely a big shock and I’m just so happy and grateful for the opportunity. It’s a dream come true.”

Pro hockey is a family sport. Dalton Smith’s father is Derrick Smith who played with the Philadelphia Flyers in the 1980’s. Everyone is likely familiar with his uncles Keith Primeau and Wayne Primeau. His cousin is Cayden Primeau who is currently in the Montreal Canadians system.

Wayne Primeau won a Calder Cup with the Rochester Americans in 1996 and played in parts of five seasons with the Buffalo Sabres including their 1999 Stanley Cup playoff appearance.

Smith talked about sharing the news with his father saying, “Oh, he was so pumped. I actually FaceTimed him so I could see his facial expression and all that. He was so happy. Itâ€™s something heâ€™s worked on with me since I could walk basically. So he was very proud.”

Amerks head coach Chris Taylor is always ecstatic to share news with players about getting a call up. Talking about sharing the news with Dalton Smith he said,Â “I called him last night, you know, nothing more rewarding than seeing seeing a player that’s worked that hard to get where he’s at and he’s deserved everything he’s getting. It just shows to everybody that we try to develop anybody. It’s just great news and you know, just well deserved for him.”

Amerks captain Kevin Porter talked about the locker room reaction to the news saying, “Everyone is extremely happy for him. Couldn’t happen to a better guy, better teammate. Comes in and works hard every day, does everything he’s asked. Definifely well deserved for sure.”

Dalton Smith is known for his physical presence in a game, obviously his fighting abilities, but he’s also adjusted to playing the current speed of professional hockey. He’s the type of player that will open up the ice and has often helped create the most offensive zone time for Amerks forwards. How much of an impact he’ll have with the Buffalo Sabres if any will remain to be seen but at this point he certainly can’t take anything away.

Chris Taylor touched on that when asked what it is about Dalton Smith and his game that created interest from the Sabres. Taylor said, “Well first and foremost you work hard and practice to work on his skills. Not just you know everyday skills, but you know puck skills, skating skills, everything. It’s been a year and a half that we’ve been working on it with him and he works hard at it and he takes a very serious. You know, this is life. And you know, I think that the attractiveness of Buffalo was the fact that does a great job of forechecking. He gets in, takes guys out, disrupts things, and gets around the net. You know, he’ll talk to people and intimdate people. He’s just a he’s a player that you want on your bench and he’s a player that makes it hard on their defense.”

“He’s great on the forecheck, gets in there, always going to finish his checks. Creates loose pucks, turnovers, and more time in the offensive zone,” Kevin Porter said when asked about the game that Dalton plays. “That’s what he’s done here and I’m assuming that’s what he’s going to do there. He’s probably going to be a little more amped up as well and put guys into the third row.”

“They’re great fans there, very supportive,” Smith said when asked about being a fan favorite in Rochester. “They seem to really enjoy my style of game so they’ve really taken a liking to me and it’s been awesome having their support through the three years.”

This is a great story about a 27 year old hockey player who is close to earning his first appearance in the NHL.

For more about Dalton Smith as a player and person give this feature below a read, it’s been one of the most popular articles on this site since I started it in late 2007.

"If I get the opportunity, Iâ€™m going to play my style and finish checks and be a presence out there, be hard to play against."

Why is Dalton Smith w/the #Sabres? How did the tough guy find out and react to the news?

You can watch/listen to the full interview below:

1 thought on “Sabres Sign Dalton Smith to a NHL Contract”