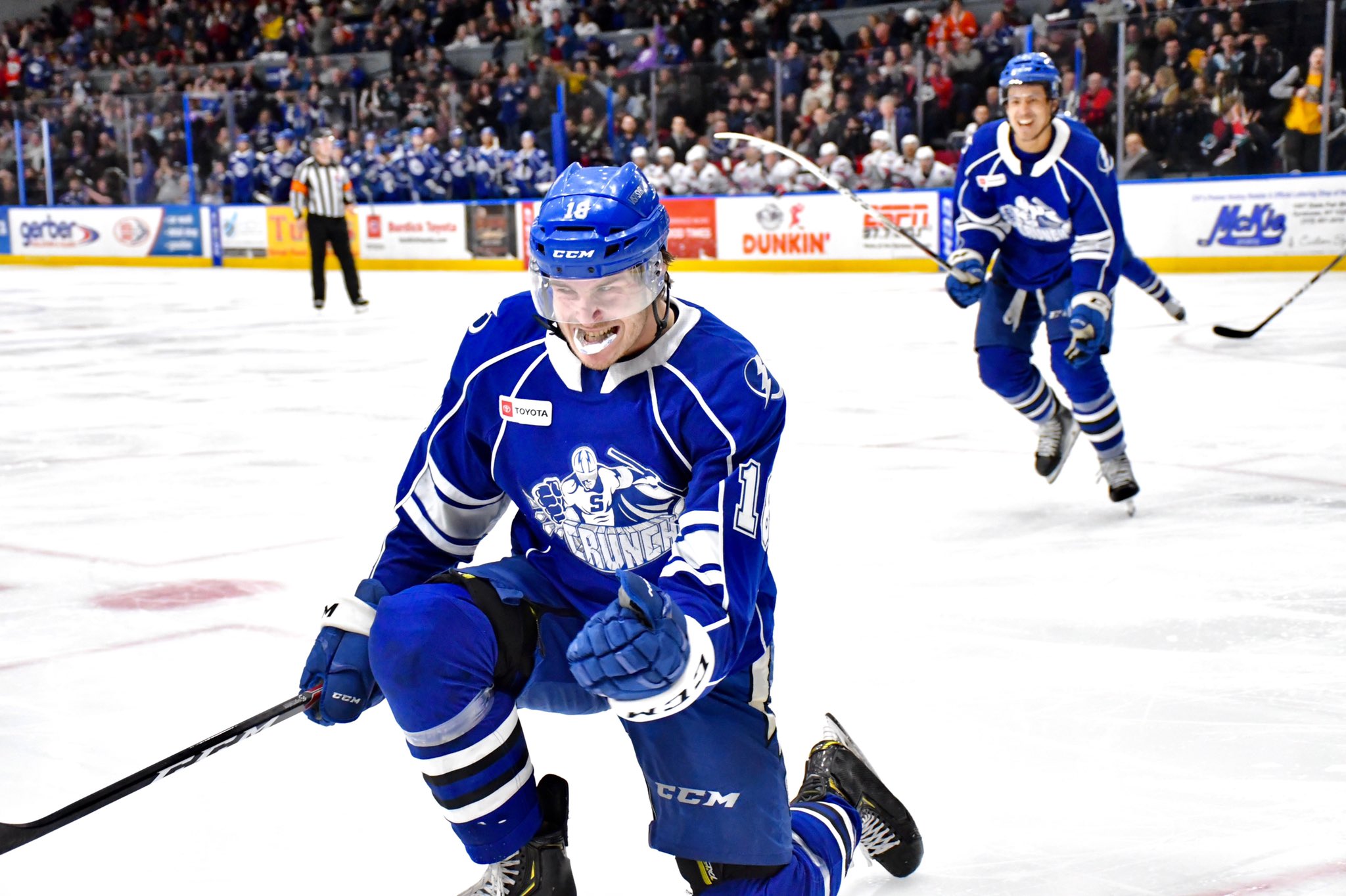 The Rochester Americans season has taken a big turn and not in the good way. The Amerks had a 2-0 lead, 3-1 lead, 4-2 lead, and then lost 5-4. The team has now lost four straight, only one win in their last seven, and they’ve lost eight of their last 11.

Andrew Hammond has now lost six straight. He isn’t getting a lot of help lately but he’s also not stealing games. Prior to this streak he had won seven of his previous nine starts. One other interesting stat is that the Amerks are now 3-8 with Casey Mittelstadt on the roster. Is it all his fault? Not at all. Although tonight a turnover lead to the game winning goal against. Prior to Mittelstadt being assigned the Amerks were 18-8. The only player the team has really been without is Curtis Lazar who has missed the last nine games while on recall to Buffalo.

The team has also fallen from first place and are now tied for second place after Belleville won again. Something has to change quick with this team. The excuse of missing players can’t be used. They’ve completely fallen apart since the middle of December.

Here’s how it all went down (followed by all of the gifs at the bottom).

Tyler Randell scored the first goal of the game at 5:55 of the first period, his fifth of the season, on a a breakaway and showed off some hands. Cal Foote fumbled a pass at the blue line in the Amerks zone and Randell was on top of him to steal it and go in on the breakaway.

Rochester took a 2-0 lead at 10:43 of the first period when John Gilmour scored down low off a pass from CJ Smith. The play started with CJ Smith dumping the puck into the corner and Sean Malone forced Patrick Sieloff to make a bad pass and CJ Smith was there for the interception.

The short handed woes continued in the first 20 minutes of the game when Rochester gave up three short handed scoring chances to Syracuse. Andrew Hammond came up big on all of them.

Syracuse was able to get within reach when Taylor Raddysh forced a turnover from Zach Redmond. Raddysh droppred a quick pass to Ross Colton who cut to the center of the ice and beat Andrew Hammond glove side. The two teams were playing four on four at the time.

Domminik Masin had been called for a double minor after high sticking CJ Smith but 1:21 into the penalty CJ Smith went to the box himself for slashing.

It only took 67 seconds for Rochester to regain the two goal lead when Brett Murray scored his fifth goal of the season. CJ Smith sent a pass up ice to Casey Mittelstadt who entered the zone, stopped, looked, and found Brett Murray in the slot who beat Martin Spencer with a quick wrist shot.

An amazing moment early in the second period was when Cory Conacher managed to talk himself out of a tripping penalty. Zach Redmond was clearly tripped up, the refs arm went up, and then it was decided no call. Credit to Conacher for getting out of it.

Sryacuse had a jump to their game to start the third period and Taylor Raddysh scored at 2:47 of the third. Ross Colton was behind the net and put the puck right on the stick of Raddysh who was at the top of the crease.

The goal against didn’t slow the Amerks. Less than two minutes later JS Dea scored short handed to regain the two goal lead. Dea had a second chance after his first shot on net was blocked.

And then the wheels fell off. Rochester went from playing to win for the first 45 minutes to completely falling apart in the last 15 minutes of the game.

First Boris Katchouk scored after Will Borgen had fallen to the ice and John Gilmour was left to try and cover two guys.

Just over three minutes later Patrick Sieloff scored off a blast from the slot up high to tie the game up at four. There’s little chance Andrew Hammond saw that puck with a lot of traffic in front of the net.

And then with 2:28 left in the game Daniel Walcott scored the game winning goal to complete the comeback win for Syracuse. Casey Mittelstadt had attempted to carry the puck up ice through the neutral zone but turned it over leading to the goal against.

With just under two minutes left to play JS Dea had scored on a back hand but the officials waived it off claiming goalie interference. Sean Malone was outside the paint and pushed into and knocked over Spencer Martin. Rochester had pulled Andrew Hammond along with calling a time out with 30 seconds left but they weren’t able to find their own comeback.

Syracuse had a 16-7 advantage in shots in the third period and scored three straight to complete the 5-4 comeback win.

Even strength, power play expired. I was listening to the audio, not watching the clock.

Cory Conacher somehow talks the ref out of giving him a penalty. Pretty obvious Redmond was tripped. pic.twitter.com/IRIBh4WDmz

Taylor Raddysh scores to get Syracuse within one. Not sure why Gilmour didn't have his stick tied up. pic.twitter.com/R0D51Kwucz

And it's a one goal game again. Boris Katchoul scores for Syracuse. pic.twitter.com/lQNvThEKQi