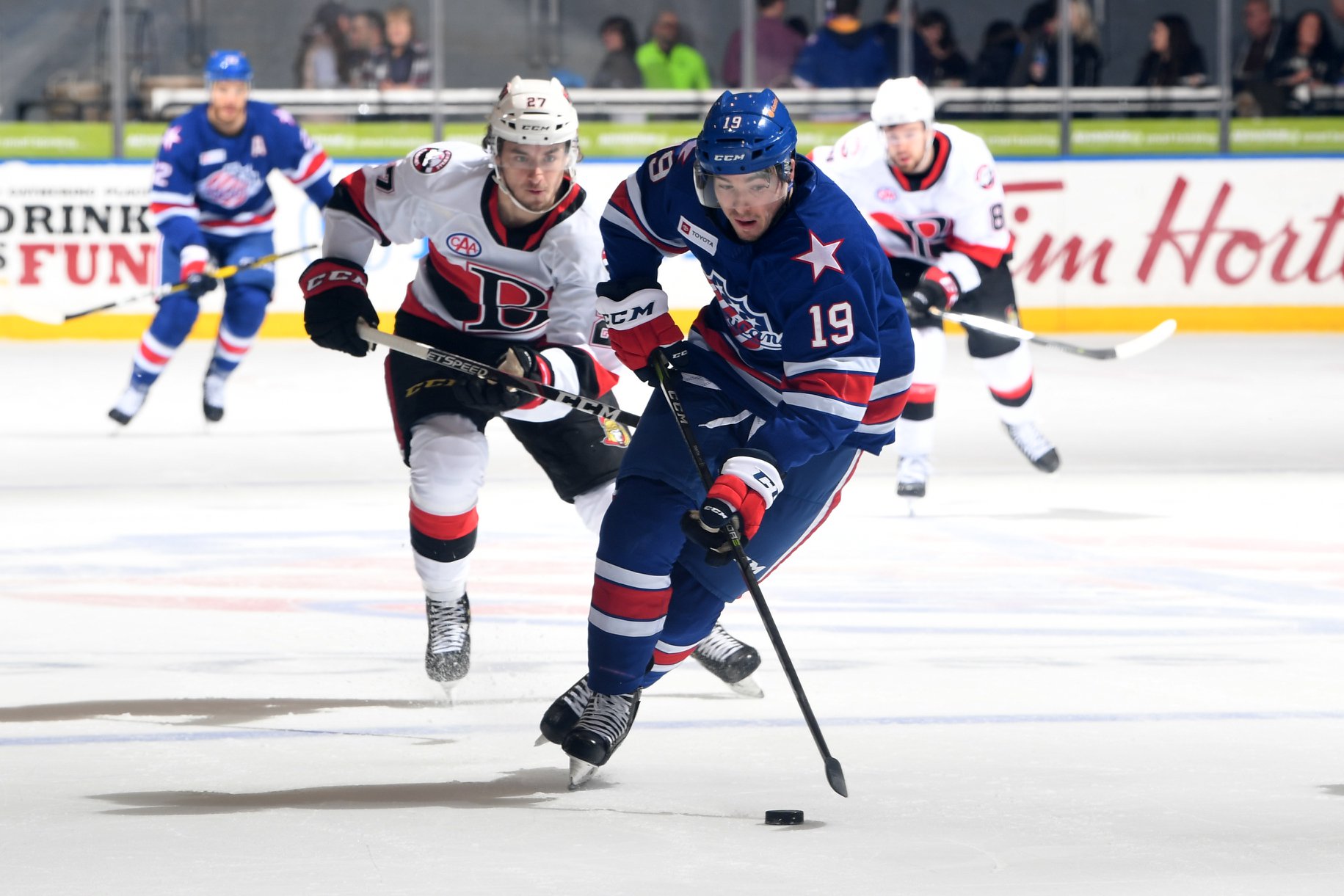 The Rochester Americans are in a tough spot right now and they know it. Friday night the team gave up a 5-1 loss to the Belleville Senators. What happened? Take your pick as to the reason. Defensive lapses, turnovers, goaltending, lack of scoring, composure, and even some panicking.

Unfortunately the worst game of the season also happened in front of the biggest home crowd of the season. A combination of holiday ticket packs and the Paychex night at the game had a crowd of 8,422 in attendance to witness the pretty miserable game that dropped the Amerks to second place in the North Division.

There’s always positives so let’s get those out of the way. It was great to see a packed building and CJ Smith finally scored a goal. Smith had gone eight games with only an assist and his goal was the only goal of the night for Rochester. That’s where the positives end.

CJ Smith was asked about scoring a goal and he said, “Obviously it’s been a tough stretch personally but I would like to get some team results too right now.” He had gone the last eight games with only one assist.

Rochester has now lost seven of their last 10 and after the game Friday night it’s time to say everything is going in the wrong direction, it’s not just an ebb and flow of the season. This is just a reference to where the team is right now after 36 games, it’s not an indication of the season being over. As a comparison, the team was 13-1-1-1 over the previous 16 games. How do you go from only losing three times in 16 games to losing seven times in ten games? See the first paragraph.

CJ Smith talked about what needs to change and he said, “We just have to trust our process and our approach to our game. We’re obviously a really good team, a really skilled team, and the beginning of the season shows the type of team we can be. Just sticking to our process and knowing what works for us, keeping it simple, and playing a full 60.”

Hearing ‘trust the process’ can make anyone in Western New York cringe but he isn’t entirely wrong. Finding the process might be the challengine part.

Friday night started off on the wrong side of things when Alex Formenton sent a quick wrist shot on net from the left side face off circile, a normal shot to get one on net, and it went straight into the net. A goal that Jonas Johansson will want back.

Shouldn’t have been a big deal, it was only one goal against.

And then the second goal against was scored, a short handed goal. John Gilmour turned with the puck and attempted to send a pass down the blue line in the offensive zone to Kevin Porter but Josh Norris reached out to get a piece of it and head down ice. Norris quickly gained control of the puck, sent a shot on net, and the rebound went to Formenton and into the net for his second goal of the game and gave Belleville a 2-0 lead.

“Well they scored first, they scored second.. so obviously that wasn’t good,” Chris Taylor said after the game. “You know we actually got a pretty good start, we were all over them. Their goalie made some big saves but the first one hurt and then second one. When we’re on power play giving up a short-handed goal it’s not good and you know we just couldn’t rebound even though we got a goal next. Then just went downhill from there. To give up two short-handed goals is not good at all.”

The only Rochester goal of the game was scored by CJ Smith with assists to Andrew Oglevie and Kevin Porter. Oglevie had dropped a pass to CJ Smith from behind the goal line and the quick wrist shot beat goalie Filip Gustavsson. This was the first game back for Oglevie after missing seven games from an injury.

Amerks captain Kevin Porter talked about what Belleville did in the game saying, “They came hard again and we definitely need to be better. I don’t think it’s anything they did. They’re a good team over there. They had a couple bounces, a couple early goals, we got behind, and just couldn’t fight back.”

Through the first 35 minutes of the game the crowd had started to show some interest and it was only a one goal game. But that was deceiving.

Vitaly Abramov scored at 15:29 of the second period, unassisted, which sent Jonas Johansson to the bench. The shot by Abramov was shot from the far corner on the goal line and beat Johansson. It was the first time this season that Johansson had been pulled from a game.

The game was over when John Gilmour turned the puck over again resulting in a short handed goal scored by Jean-Christophe Beaudin to give Belleville a 4-1 lead. It was the first shot of the game that Hammond faced. Gilmour had the puck behind the net when Morgan Klimchuk stripped him of the puck followed by a centering pass to Beaudin in the slot who scored from the top of the face off circle in the slot.

Gilmour was asked about the turnovers after the game and he said, “It’s part of the game. Obviously hindsight is 20/20, wouldn’t do that if I had the chance to go back but it happened, have to learn from it.”

It’d be one thing if this was just a one game slump that can happen but this has been going on for six games.

Chris Taylor was asked after the game if Gilmour has to be better and he said, “Yeah absolutely, I expect everybody to be a lot a lot better and their composure in all different situations. They’re a young team (referring to Belleville), we have an experienced team, and they they look like a more experienced team than us.”

“No you can’t, that’s the disappointing part you know and we’ve been doing it the last six games,” Taylor said when asked about a defenseman as experienced as Gilmour making that mistake. Taylor added, “Before that we were playing pretty good hockey and just last six games. You know when you lose your confidence, yeah I understand it’s gonna be some battles, but just the mistakes we’re making are uncharacteristic about a lot of different guys and and the experience of our guys.”

Kevin Porter talked about the game saying, “Our power play definitely has to be better, our kill was good tonight, but you can’t give up two short handed goals. That just Kills your momentum. We gave one up late in the second to make it 4-1 and that kills your momentum. At that time we were playing well and getting some opportunity but again that just kills it.”

What’s changed between November and January? In November the team had Curtis Lazar (called up Nov 8) and Tage Thompson (called up November 22) on offense who were contributing. Both players were gone before the slump started so you can’t say the moves are directly related.

“Keep things simple,” is what Kevin Porter said about turning things around. “That’s the good part about this is that we got a chance tomorrow night to play a team that’s below us and we have to come out and be ready to go.”

Binghamton is also below Rochester and those games haven’t gone well at all.

Talking about the rut the team is in John Gilmour said, “It’s a long year, I don’t think many guys are walking around with their heads down. We know how good we can be. It’s just about turning the page. The beauty of this game is thst we have another one tomorrow.”

“I’m just disappointed how we reacted after giving up two goals,” Chris Taylor said towards the end of his post game press conference. “We have to be better and we all know that. The guys know that and are taking responsibility for it. The good part is we get back at it against a team that we don’t really like in Syracuse.”

Is it a matter of trying too hard? Chris Taylor said,Â “We’re absolutely trying very hard and that’s sometimes that’s a problem because you’re trying to run one place to the next place and you’re gripping your stick harder. We just gotta find our confidence again. I really liked our start. If you watched you know the first ten minutes we had 12 shots on net so it was a really good start. And then you know even if they score one or two goals doesn’t matter we’re still a good team, there’s a reason why we’re in first place because we know how to score and we know how to win. I felt that we panicked a little bit and we shouldn’t be panicking in these situations.”

Everything has gone south at the same time. Defense, offense, and goaltending. The Amerks dropped to second place after the loss and Utica winning. There’s currently only four points separating second place and fifth place (Toronto) in the North Division. No one is panicking about the overall season with 40 games still remaining but it might not be that far off with the way things are trending.

Casey Fitzgerald returned after missing the last 11 games due to an injury.

Casey Nelson was out with an upper body injury. He skated Friday morning but didn’t feel right after the skate and was held out of the game.

Taylor Leier is going to be out until after the All-Star break which is January 26 and 27. Leier was hit by a puck as he fell to the ice in front of the net last Friday in Belleville. The second period ended 40 seconds early as the medical team was called to the ice with a neck brace and stretcher. His official status is week to week. The All-Star break is just a time frame he’ll at leats be out until, it could be longer.

There weren’t any gifs sent out in Tweets. You can watch the highlights in the clip below.

1 thought on “Recap: Amerks Panicked as Belleville Scored on Turnovers”