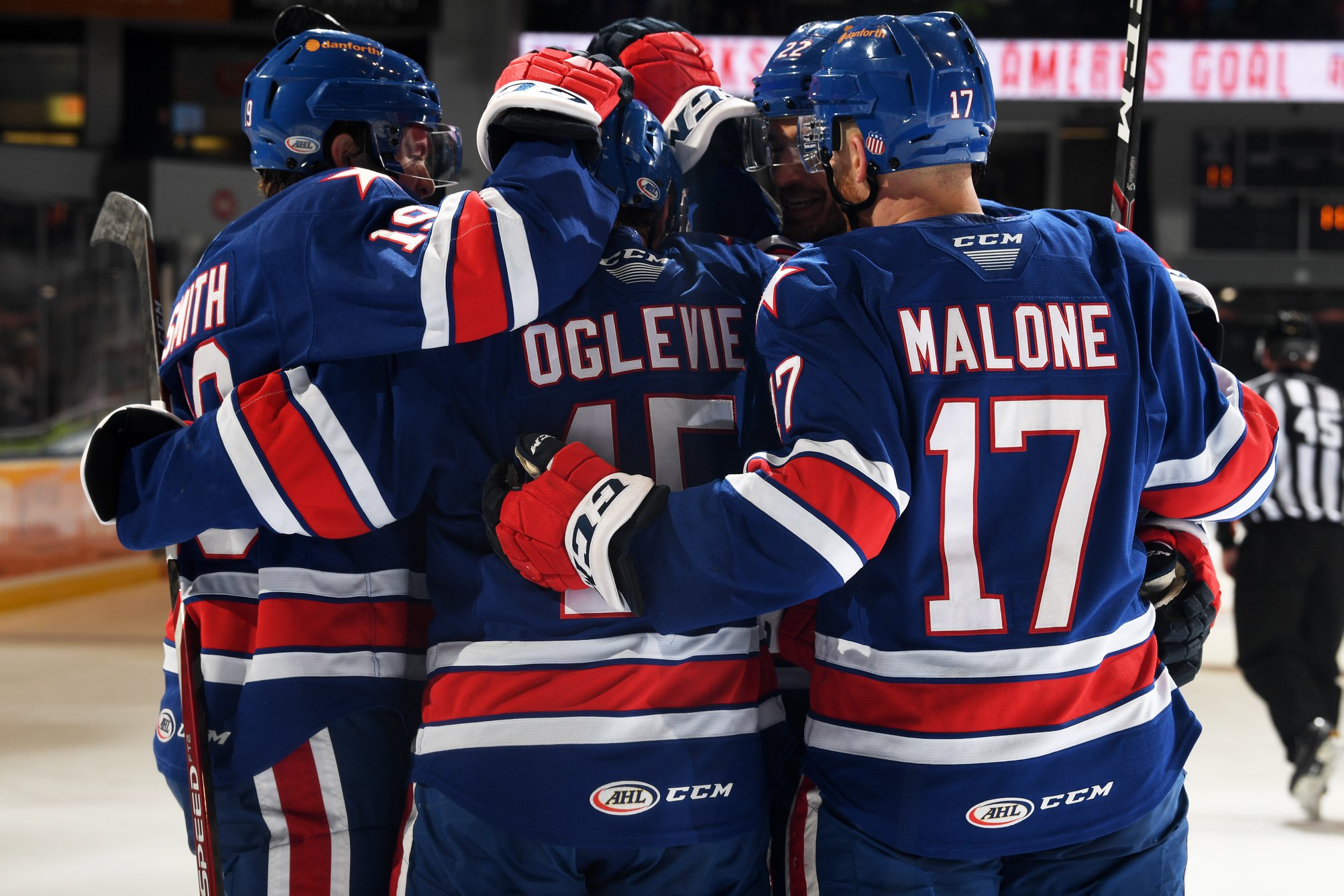 Losing streak? What losing streak? The Rochester Americans return to action tonight following the All-Star break to kick off the final 33 games of the season riding a three game winning streak. Two of the last three games had some moments but each game was a couple steps in the right direction following a dreaded seven game losing streak.

The Amerks are home tonight, January 31, hosting the Syracuse Crunch. The two teams played this past Saturday that resulted in an Amerks 3-2 win. Below is a recap of the past week and a half and where they’re at moving forward.

Quick Recap of the Last Three

3-2 overtime win at Cleveland – Lawrence Pilut broke the losing streak with an overtime game winning goal. The Amerks had a two goal lead following the first period but Cleveland scored once in the following two periods to force overtime. A pass from Mittelstadt to Pilut won the game to change the course heading into the break. [ Game Recap at Amerks.com ]

5-2 win vs Laval – Goalie Keith Kinkaid helped the Amerks by essentially scoring on himself while trying to clear the puck. Sean Malone had tossed the puck in on net and was given credit. Take the bounces when they go your way. Andrew Oglevie (x2), CJ Smith, and Scott Wilson had scored the other four goals. Jonas Johansson made 31 saves in the win. [ Game Recap at Amerks.com ]

3-2 win at Syracuse – JS Dea scored the game winning goal when Crunch goalie Martin Spencer poorly played the puck behind the net allowing Dea to steal it and score short handed. Eric Cornel and CJ Smith scored the other two goals. A solid team game almost fell apart in the final three minutes but it didn’t and the team went into the All-Star break on a positive note. Two late penalties provided the Crunch with a power play when they scored to get within a goal with less than two minutes to play. [ Game Recap at Amerks.com ]

Will the losing streak be a thing of the past? The team started playing that grind it out, be on top of every puck style of hockey again that brought them success and will hopefully continue. Games this weekend against Syracuse and Binghamton will be a new testing ground following the week off.

There’s a lot of hockey remaining to be played between now and April 11 when the regular season ends and it’s going to be a race in the North Division. Despite a seven game losing streak the Amerks have remained at the top of the division.

Rochester is in second place and four points out of first place with two games in hand (they’ve played two less games than first place Belleville). Utica is tied with Rochester at 54 points but Utica has played three more games than Rochester.

Games in hand is going to be a factor in this final stretch and Rochester has the chance to gain ground on the other teams.

While Belleville, Rochester, and Utica have been the top teams in the division the race for fourth place can be considered close. There’s only five points separating fourth place and eighth place in the division. Every game is going to matter to every team, no one is out of the playoff race.

Jonas Johansson was called up to the Buffalo Sabres on Wednesday morning. Linus Ullmark was injured (lower body) Tuesday night and will be out approximately three to four weeks.

Ukko-Pekka Luukkonen has been called up to Rochester from Cincinnati.

JS Dea was called up to the Buffalo Sabres today, Friday morning, following an upper body injury to Kyle Okposo during the game Thursday night.

Domenic Pittis is being inducted into the Amerks Hall of Fame tonight (January 31) as the class of 2020.

Set to become the 65thÂ member of the exclusive club, Pittis quickly evolved into one of the franchiseâ€™s most prolific scorers during his three seasons in Rochester, reaching the 20-goal mark twice and recording at least 65 points on all three occasions. In 204 career games with the Amerks, Pittis produced 246 points, placing him among the top 20 forwards all-time in franchise history, and ranking 17thÂ all-time with 171 assists. He also added 70 points (16+54) in 57 postseason appearances while leading the Amerks to the playoffs in each of his three seasons, including back-to-back trips to the Calder Cup Finals in 1999 and 2000.

â€œIâ€™m extremely honored to have been inducted into the Rochester Americans Hall of Fame,â€ said Pittis.

â€œI played with so many great players, but it really was the group and the Amerks culture that made my time in Rochester so memorable.â€

Five Questions for the Final Stretch of the Amerks Season

And in case you missed it…