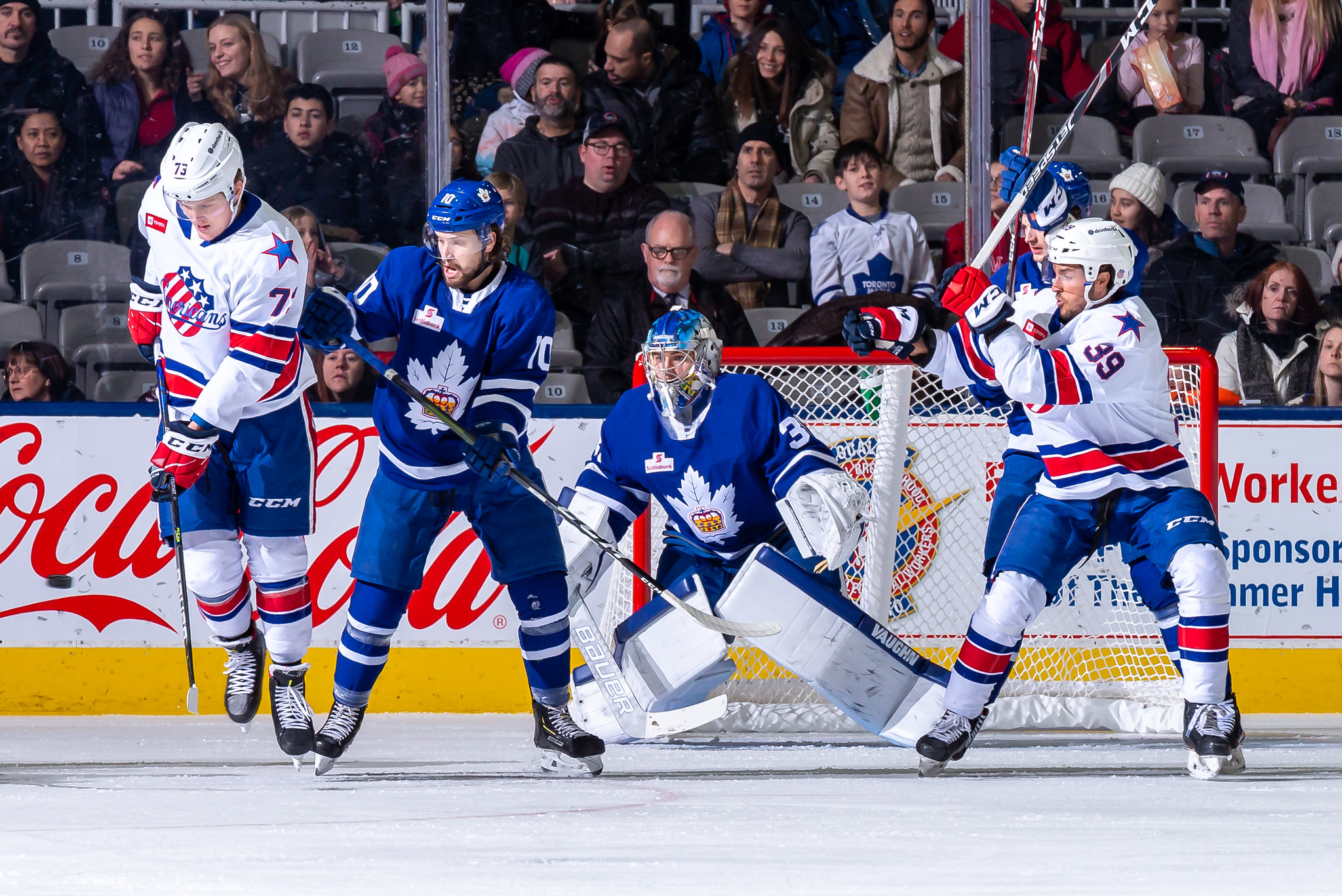 The Rochester Americans did everything wrong Friday night and they followed it up Saturday afternoon by doing a lot of things right in Toronto but the one thing they couldn’t do was score a goal. Something that’s important in a hockey game. The Marlies won 4-0 with two of those goals being scored on an empty net.

It only took 52 seconds into the first period for Mason Marchment to score what would be the eventual game winning goal. A pass by Nic Petan from behind the net setup Marchment for the one timer that beat Andrew Hammond.

At the start of the second period Dalton Smith and Marchment lined up from across each other and when the puck was dropped Dalton Smith went after Marchment. One player fell to the ice, Marchment, and Dalton Smith was awarded a double minor for roughing. This was likely in response to Marchment taking Sean Malone out of the game (more on that below) with a high hit late in the first.

Shorthanded from that penalty the Amerks had a chance to tie the game when Kevin Porter and JS Dea carried the puck into the Marlies end all along but one too many passes resulted in the final shot by Dea going wide. A prime scoring chance that would have changed the game.

Andrew Hammond stopped a penalty shot at 12:24 of the second period that was awarded to Kenny Agostino. Andrew MacWilliam had knocked Agostino off the puck on a breakaway.

With the Marlies still only leading by one the Amerks had another greay chance when Lawrence Pilut shot the puck from the point that was deflected high in the air, bounced off the top of the net, and dropped behind goalie Joseph Woll. Woll was quick to fall to the ice and Marlies defenseman Kevin Gravel was quick to get his stick onto the goal line. It wasn’t easy to see from the AHLTV feed if the puck went in but if there were NHL like reviews in the AHL this one would’ve been looked at.

Mason Marchment scored again with 1:12 left in the second period redirecting a shot by Kenny Agostino into the net for a power play goal to give Toronto a 2-0 lead. Moments before the shot MacWilliam was cross checked by Marchment and shoved out of the play.

Matt Read and Joseph Duszak would score the two empty net goals for Toronto to secure the win.

A frustrating game for Rochester in which no matter what they did they would shoot wide, hit a post, or Woll would make a save. Casey Mittelstadt had a prime chance with an open net down low but the puck got a piece of the goal post and went through the crease and out the other side. Rasmus Asplund had a breakway himself in the game but Woll put up his blocked to get a piece of the puck and deflect it wide. Only three players didn’t record a shot in the game – Sean Malone (only played the first period), Jarrett Burton, and JS Dea.

The game was better than Friday night but you can’t be happy about back to back losses against two of the worst teams in the division.

Over the last 15 games in order of occurrence..

Next up: Rochester will travel to Charlotte for games Tuesday and Wednesday night.

With Rasmus Asplund and Lawrence Pilut back in the lineup today it required some roster decisions for the coaching staff. One of the more notable scratches was defenseman John Gilmour who sat out his first game as a Rochester American.

Sean Malone left the game late in the first period as a precaution after being hit high by Marchment. He’s believed to be ok but was held out of the rest of the game.

Malone was taken out of the game late in the first after this hit by Marchment. Explains why DSmith tried to fight him. Marchment turtled. pic.twitter.com/WjV8QQqlGy

The game overall in gifs as they were sent out in Tweets..

A look from behind the net. pic.twitter.com/ub4lL1LCYw

Second period started with Marchment letting DSmith throw some punches at him. Only penalty was a double minor for roughing on DSmith. pic.twitter.com/NwryjhF4XH

Playing short handed Porter and Dea were all alone and… nothing. Golden opportunity to regret. pic.twitter.com/PCFVdLM178

Marchment also plowed Redmond from behind into the boards late in the 2nd. There was no call. pic.twitter.com/VcTZmVZxgv

If only the AHL had overhead reviews. But the Amerks can't score in Toronto (that line has been said before). From late in the 2nd.. pic.twitter.com/6ySBwHSVAL

Overhead view of the 2nd goal against shows MacWilliam taking a nice cross check and shoved out of the play. pic.twitter.com/ye9CtjkQmF

Marlies empty net goal and they lead 3-0. That was an Elie to Mittelstadt pass that lead to the play down ice. pic.twitter.com/rruygwnwNW