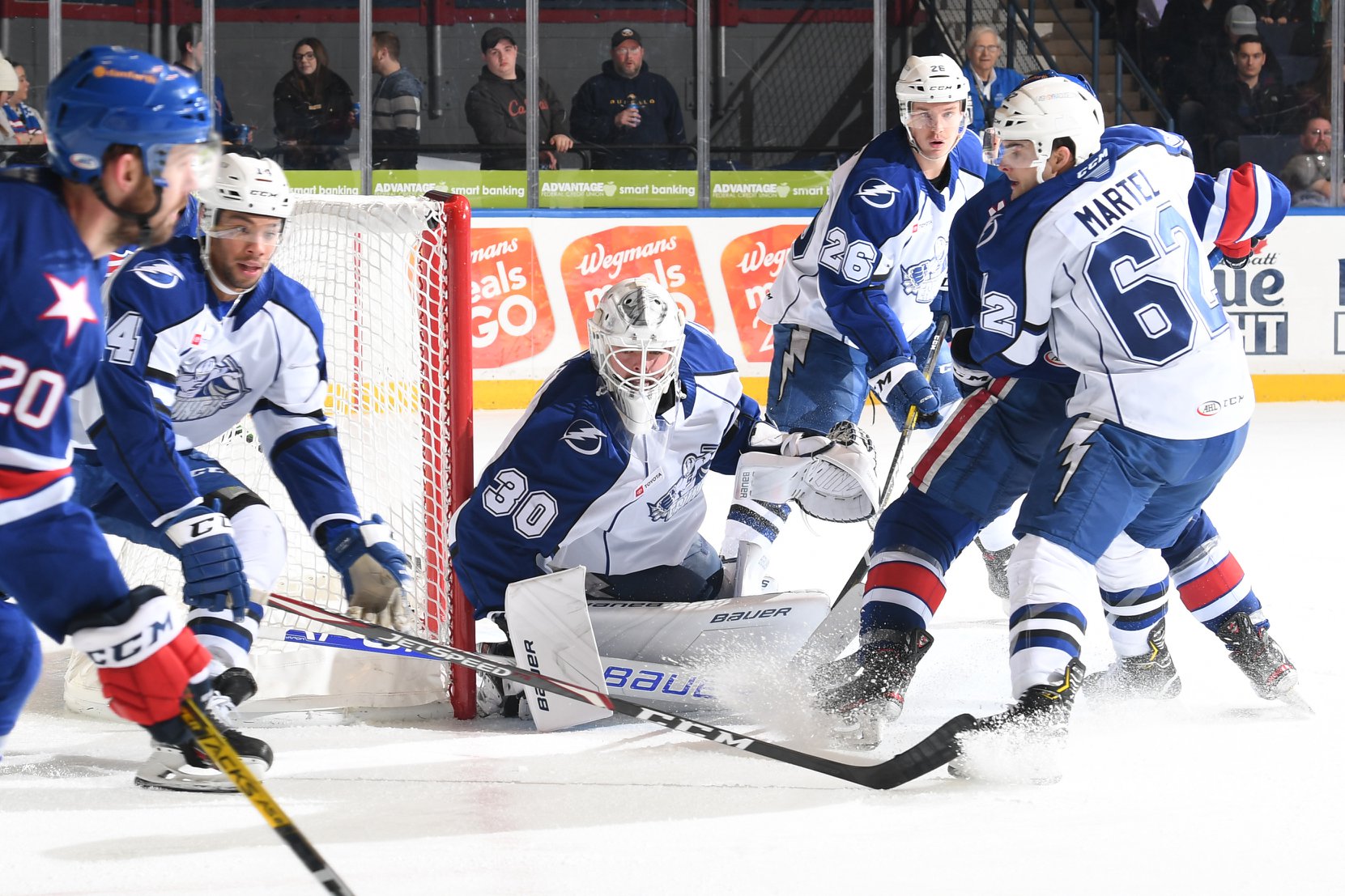 If you stayed home from the Amerks game Friday night because of the weather in Rochester I can let you know right away that you didn’t miss anything. The six game winning streak vanished as if it never existed during the 5-2 loss to the Syracuse Crunch.

Is it the end of the season? Not at all, it was one game.

But it was also as Jacob Bryson put it, “probably one of our worst games we’ve played this year.”

One of the wins during the six game winning streak was an exciting 4-2 physical win over Syracuse last Friday when the game ended with pushing, shoving, and some punches being thrown. Syracuse took that energy they ended the game with and carried it over into this game.

“A lot more energy,” Chris Taylor said when asked what the team could’ve done to come out with the win. “We just didn’t have anything tonight. It was unfortunate because when you play a division rival becuase you want to be ready for the game. I thought we were fumbing pucks all over the place, we lost a lot of 50/50 puck battles, and lost a lot of face offs. They were just more determined.”

Casey Mittelstadt scored a text book power play goal late in the first period to give Rochester a 1-0 lead.

This is how that drop pass can work perfectly.

Worked out as drawn up. Bryson to Malone to Mittelstadt and it's a power play goal! #Amerks lead 1-0. pic.twitter.com/X06yR7b7T7

Unfortunately there wasn’t going to be much from the Rochester Americans team after that. Three penalties in the first half of the second period had the team playing on the penalty kill and a five on three provided the Crunch with an opportunity to take the jump.

Chris Taylor said, “Can’t take two penalties like that to go down five on three. We could feel it going in the first period that we just didn’t have it. We weren’t quite there with only five shots on net. And then to take two penalties in the second you could see it just drop.”

Syracuse collapsed to the front of the net with three players and Gemel Smith was able to lift the puck over Ukko-Pekka Luukkonen.

A 1-1 tie game would sound like a close game on paper but this game was anything but that. It took almost 14 minutes (13:48 to be exact) for Rochester to put it’s first shot on net.

“We got into a little bit of penalty trouble there in the second and sat back on our heals,” Mittelstadt said. “We can’t win every game but it doesn’t feel good right now”

Mathieu Joseph redirected what felt like a slow moving puck to everyone in the building at 14:58 of the second period to give Syracuse a 2-1 lead. It was a low shot and Luukkonen committed to one side and the tip by Joseph bounced into the net.

Alex Barre-Boulet pulled off a slick toe drag around Andrew MacWilliam and wrist shot later was able to beat Luukkonen glove side at 6:07 of the third period to score what would be the game winner. Danick Martel split the defense racing down ice and flipped the puck over the right shoulder of Luukkonen and into the net.

A tough game for the rookie goalie but it wouldn’t be a game that’ll be put on his shoulders.

“We let him hang out to dry. He made a couple big saves to make it what it was after two (a 2-1 game),” Chris Taylor said about the play of Luukkonen. “Can’t fault him on that loss for sure but obviously if you look back at it he’d want one or two of those back. I thought he played pretty well for us to keep us in it.”

JS Dea scored a power play goal at 12:37 of the third period but it was too little too late. It was a perfect goal with Casey Mittelstadt feeding the pass to Dea who ripped a one timer into the net.

Outside of the two goals that Rochester scored they handed the game to Syracuse.

“The 50/50 battles we werent hard enough,” JS Dea said after the game. “They were a desperate team out there. We knew they were going to come strong and we just didn’t show up.”

Rochester simplified their game which is how they had won six straight but that game plan somehow went out the window for the players. They tried to complicate things when they were down and it all fell apart.

Martin Spencer had a relatively easy night in net for Syracuse making 22 saves and very few of those were anything of high quality.

“What bothers me is that it’s at home and against a division rival,” Chris Taylor said. “That’s what bothers me most out of this whole thing.”

It’s all about the response. Rochester plays in Toronto at 4pm Saturday afternoon and can bounce right back.

Lawrence Pilut and Rasmus Asplund were reassigned to Rochester from Buffalo. We’ll found out at game time if they were able to make it to Toronto.