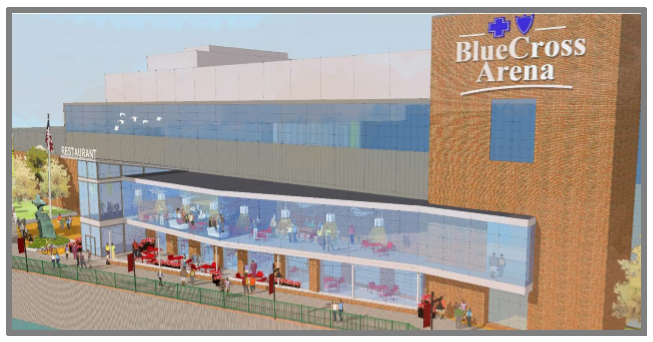 It’s been just over two years since the idea of a restaurant at Blue Cross Arena at the War Memorial was first mentioned and on Friday the City of Rochester took the next step by issuing a request for expression of interest (REOI) for a restaurant operator.

This could be an excellent addition to the building not only for before and after events but for downtown in general. It is a great location along the river that has been underutilized by the city especially during the warmer months.

Highlights from the REOI that was released (scroll down to read the full document):

A time frame has not been posted yet as to when the restaurant would be expected to be completed and opened.

Who has the capacity in this current climate to open a new restaurant like this? A local brewery? Hopefully not a chain. Could it be a (585) Food and Sport similar to (716) Food and Sport attached to the Harborcenter in Buffalo? Questions to be answered as the work on the building progresses.

This project is in addition to work already underway to expand the building along Exchange Blvd along with bathroom and audio/visual upgrades inside of the building.

View the rest of the REOI document below:


It’s been a long time since work has been proposed for the building and now being put into action. Below is a link to the full time line of projects announced to where we’re at now.