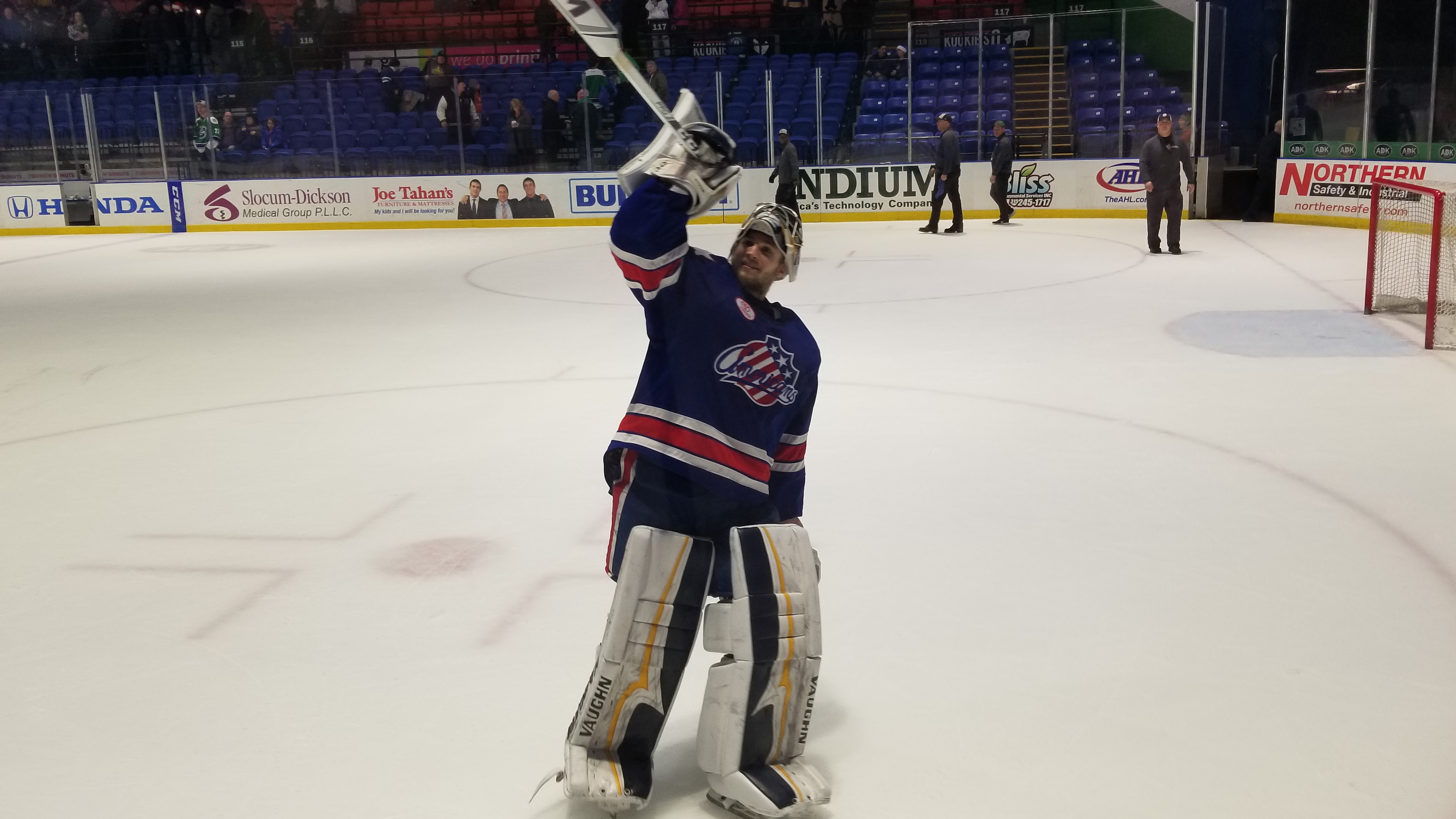 It’s another Monday morning in Rochester, NY and the Rochester Americans are coming off of another weekend that should be talked about with a win and a loss.

A week ago the team finished the weekend with a three day road trip with three games in less than 48 hours and finished with 5 out of 6 points.

This weekend the team lost 3-2 against the Toronto Marlies on Friday night and on Saturday night came back from two goals down and won in overtime against the Utica Comets. Video highlights of both games available at the bottom.

The Toronto Marlies have been the top team in the league since the season opened but so have the Amerks. How top teams play against each other is the story, not necessarily who won or lost.

After the game on Friday night Linus Ullmark said, “Weâ€™ve showed time and time again that weâ€™re a team to be recognized this season. We just hope that we can keep the run going until the post season and hopefully during post season too.”

Brendan Guhle spoke with confidence after the game on Friday saying, “We know we have it in here to beat those guys. The way we looked at it was a test for them and I think we outplayed them. We play them again weâ€™ll win.”

It’s the middle of December and the team is confident that they are a top team in this league and willing to talk about it. They’ve talked about the high expectations they’re putting on themselves and what they need to do to achieve those expectations.

This team is special. This team is putting meaning back behind the Amerks crest that used to be the standard. They’re here to be a family, develop, care about the community and make sure they’re better tomorrow than they were today.

That may all sound cliche but they’re backing it up with actions.

On Friday night the team was down by one in the second period when Brendan Guhle and Alexander Nylander scored to put the Amerks up 2-1.

Enjoy Brendan Guhle in Rochester, this will likely be the only full season he plays here before his NHL career starts. After the game Chris Taylor said, “Guhle had an amazing night tonight. He was up in the play all night. His goal was unbelievable, NHL goal.”

Just over two minutes after that goal is when Alexander Nylander followed his own shot to bury the rebound.

Toronto scored two more to win the game but the Amerks were in it the whole time. The scoring chances were there but so were the saves. The Marlies had Calvin Pickard in net, he played 50 games in the NHL last season for the Colorado Avalanche.

Justin Bailey returned to playing on Friday after missing 10 games with an ankle injury but appeared to injure the ankle again. He didn’t play on Saturday night.

The game was back and forth between both teams and 4:57 into the third period the Comets took a 2-0 lead.

The goaltending by Adam Wilcox was excellent keeping the score from increasing. Rochester wasn’t without chances while they were down. Sean Malone had a wide open net at one point and somehow a Comets defender got a leg in the way blocking the shot. Another moment in the game there was an Amerks shot heading into another open net when a Comets player somehow got the shaft of his stick in the way and deflected the puck.

The Comets players and fans were becoming confident in the game. This Amerks squad was confident as well that they weren’t out of the game.

As the Amerks headed to their sixth power play of the game I had written, “sixth time is the charm.” It was.

CJ Smith took the puck around the back of the net, spotted Sahir Gill going to the net and put the puck perfectly on his stick.

#Gilly #Gilly with his career-high seventh goal of the season! pic.twitter.com/njJCZXmdsy

With just under three minutes left in the game CJ Smith lead the way again. He took the puck from the goal line, put it on net and Nick Baptiste buried the rebound.

With his fifth goal of the season, @NickBaptiste knots the score at 2-2 pic.twitter.com/XTEFBIBiFj

This Amerks team doesn’t hang there heads, they don’t quit and they’re learning what it takes to win. I drove to Utica for the game and no matter how it ended it was worth the trip.

Kyle Criscuolo, Brendan Guhle and CJ Smith started the three on three overtime and it only took 17 seconds to finish the game. Guhle chipped the puck along the boards, Criscuolo spotted CJ Smith on the blue line and he won the game. Backhand, post, net.

Two things about this.. CJ Smith is obviously awesome and won the game. Also watch the top corner and the excitement of Ullmark and the trainer! #Amerks #RCHvsUTI pic.twitter.com/Kd5UxpJML2

And it’s also great watching a team rush the ice and the giant group hug after the win. This team is a proud family! #Amerks #RCHvsUTI pic.twitter.com/WLNau4tvlO

The three point night has CJ Smith tied for third overall in the league in points at 30, 10G+20A. The goaltending by Adam Wilcox was his best game of the season.

There’s another Amerks home game this Wednesday December 20 vs Belleville Senators. Tickets are buy one get one free on Wednesdays!

Being a Family and Leadership is Key to the Amerks Success

CJ Smith has Skill, Vision and a Development Mindset

2 thoughts on “Recapping Another Excellent Weekend for the Amerks”