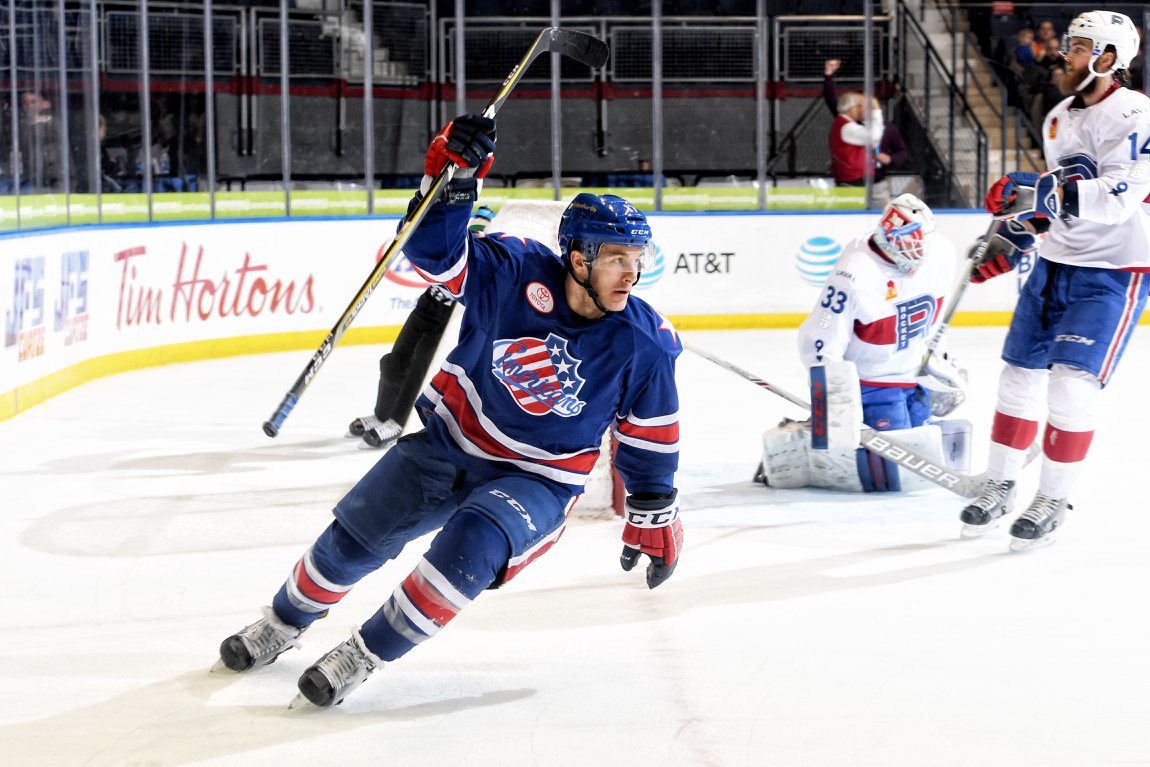 It took almost two months to happen but the Rochester Americans finally have back to back wins after finishing off Laval Rocket at home on Sunday afternoon.

They were team wins as well, not just one player leading the way.

Adam Wilcox had 21 saves on Sunday, seven of which came in a barrage within the last seven minutes of the third period for his 10th win of the season.

Less than an hour before the game started the news dropped that Brendan Guhle and Kyle Criscuolo were called up to the Buffalo Sabres.

The depth of the Amerks roster said, no problem, we’ve got this!

The line of Justin Danforth,Â Daniel Muzito-Bagenda and Dalton Smith lead the way and played their best hockey of the season with every shiftÂ by limiting everything that Laval would try to do and wearing them down. They also scored two of the four goals in the game.

Three penalties within 13 seconds gave Laval an early four on three power play in the first period and they setup Adam Cracknell with a one timer from the face off circle.

Rochester followed up with two goals within 34 seconds to take a 2-1 lead.

Zach Redmond scored from the top of the face off circle with a wrist shot. The puck was fumbled and almost turned over by Alexander Nylander but he made a quick correction, passed it to Matt Tennyson who fed Redmond.

Daniel Muzito-Bagenda scored his first AHL goal of the season 34 seconds later after hard work from his line mates Justin Danforth and Dalton Smith. The two created a turnover along the boards, Danforth carried the puck to the goal line and fed a pass to Muzito-Bagenda waiting at the top of the crease.

Laval scored their only other goal of the game with 50 seconds left in the first when Willie Corrin shot a bouncing puck down the ice from the point and past Wilcox.

It was a back and forth second period with the Amerks putting shots on net and also blocking shots helping out Wilcox. Nathan Paetsch dropped to the nice and took a puck off the back of his head. Sean Malone stepped in front of a rocket from the point that ended a shift early.

Justin Danforth scored his first AHL goal of the season with a breakaway goal off a perfect pass from Nathan Paetsch. Danforth took off down the middle, Paetsch fed him the puck and away he went.

Amerks took a 3-2 lead and played to win in the third period. They held Laval without a shot until 13 minutes into the period and continued using their bodies as well.

Justin Danforth after the game, “We were just trying to be the energy guys. Playing simple, hitting guys, and turning pucks over.” Mission accomplished!

Dalton Smith made a big play with under five minutes to go in the game as he charged at the puck to clear the zone and took a huge hit in the process to make it happen. Sacrificed himself and it paid off.

Chris Taylor liked what he saw in the game saying, “I thought we stuck with it. Could’ve went the other way at some point. We stuck with it and found a way.”

Another sacrifice with 21 seconds left in the game Sean Malone stepped in front of a shot again, Kevin Porter picked up the loose puck and fired it down ice into an empty net for the 4-2 win.

They walked all over the Marlies on Saturday afternoon, held off Laval on Sunday and lead the pace of play and the result was back to back wins for the first time since January 5 and 6.

This coming weekend is a three in three hosting Providence on Friday, at Syracuse on Saturday and hosting Syracuse on Sunday.

Amerks Walked Over the Marlies