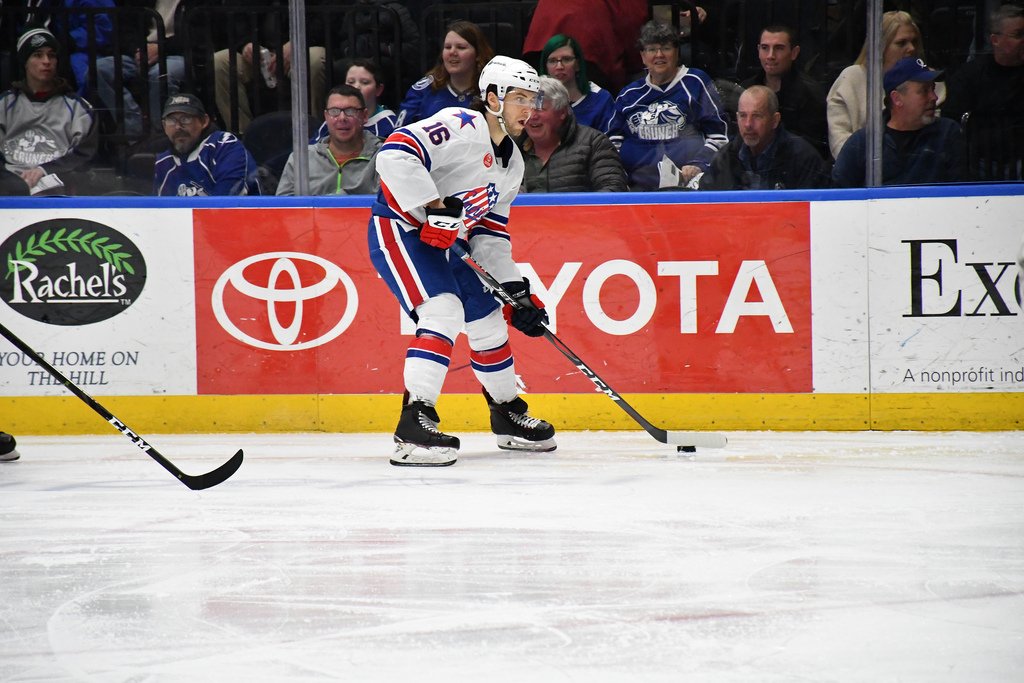 The Rochester Americans battled against the Syracuse Crunch for the second night in a row and flipped the outcome on Saturday to end the night on the winning side. A 3-2 win in the shootout put the Amerks back into the top spot in the North Division and also gave them their 30th win of the season.

It was another battle from start to finish in what felt like playoff hockey again. These two teams may seem somewhat reserved when it comes to giving quotes about the games but once the puck drops it’s clear they know what’s on the line. The officials appeared to treat the game with the same intensity and let the two teams play hockey without nitpicking calls both nights.

There were three player changes compared to Friday night. Adam Wilcox started in net, Brandon Hickey was in for Andrew MacWilliam, and Tyler Randell was in for Andrew Oglevie. Wilcox is the go to started whenever the Amerks play in Syracuse and he was a wall. A 29 save night and perfect in the shootout may have been the best game of the season for Wilcox.

Remi Elie scored his second goal of the season on the power play at 4:20 of the first period to put the Amerks up 1-0. Taylor Leier and Kevin Porter had assists on that goal. It was the definition of second and third chances. Porter took a shot, Leier got the rebound, Elie buried the third chance.

With less than 25 seconds left in the first period Dalton Smith sent Brendan Guhle down ice on a breakaway but Eddie Pasquale was able to close the five hole just in time. It was the only shot Guhle had and it was close enough to be worthy of a mention.

Syracuse tied the game at 7:17 of the second period when Mitchell Stephens scored off a rebound. Gabriel Dumont carried the puck from around the back of the net, Wilcox got a pad on it, and Stephens was at the other side of the crease. Casey Nelson was in front of the net the entire time. He’s noticeable in the clip that can be viewed below.

Another player also scored his second goal of the season, Will Borgen. Assists to the unlikely duo of Yannick Veilleux and Dalton Smith. That’s a line combination that majority aren’t going to expect to score but in a big game like this it’s the type of scoring that is needed. Veilleux managed to gain possession of the puck from the blue line, carry it down the boards, turn, send a pass to Will Borgen in the slot who ripped a shot into the net.

Less than two minutes into the third period the Crunch were able to take advantage on a defensive mistake and tie the game 2-2. The score that would last until the sixth round of the shootout.

Brandon Hickey pinched along the boards attempting to make a play and the Crunch took off down ice. Cal Foote carried the puck down ice and handed it off to Ross Colton who scored high glove side on Wilcox. Hickey was on the bench but wasn’t seen on the ice again until the game was over.

Matt Tennyson made the save of the game with just over three minutes to play. Corey Conacher took a shot, Andy Andreoff got a piece of it, and so did Adam Wilcox. The puck landed in the crease just behind Wilcox and Tennyson was able clear it reverse five hole away from the net.

Rochester controlled majority of the play in overtime using all area’s of the ice to move the puck and attempt to generate plays. Syracuse saved all of their chances for the last 15 seconds as they appeared to press a turbo button and go full speed at the Amerks net.

The shootout went six rounds and it took the 12th shooter to finally score and end the game. Taylor Leier had Pasquale wondering where the shot was going to go and Leier picked blocker side to sneak one through for the win. It’s the second game winning shootout goal for Leier since becoming a Rochester American.

Another close game that was exciting to watch.

Rochester returns to action Sunday afternoon at 3pm on home ice versus Binghamton to finish off the three in three weekend.

Elie from Leier and Porter for a PP goal! Amerks p 1-0 pic.twitter.com/lpxm0fPaRl

Here's the Mitchell Stephens goal when the Crunch had tied the game 1-1. Can't even complain about a hold on Nelson just prior to this. pic.twitter.com/wlhJeQiiAR

Will Borgen from Veilleux and D Smith!! #Amerks took a 2-1 lead. pic.twitter.com/IQJ3ebsLmP

Ross Colton scores high glove side on Wilcox to tie the game 2-2. pic.twitter.com/VWIFJotiUt

Tennyson with the save of the game on the PK!! pic.twitter.com/E4zkwrxYyX

In case you missed it from Friday night and Saturday morning…