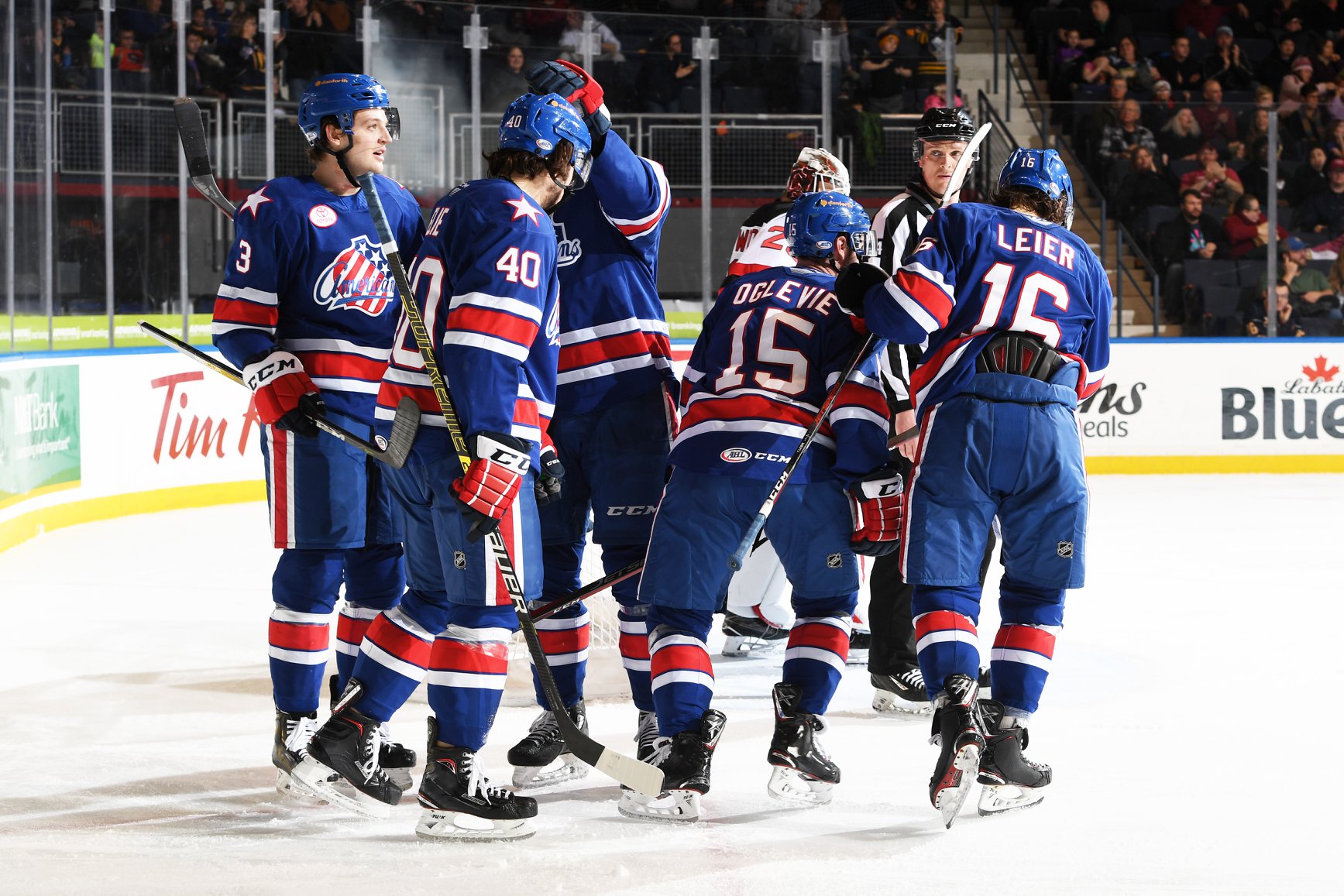 The line combinations have stayed pretty consistent through the first 51 games of the season for the Rochester Americans but on Sunday afternoon a new line rolled out during warm ups and dominated the game. The three players had played a combined 31 games leading up to Sunday afternoon and it was the first time they’d ever skated together on a line. The team also had help from a defenseman that had only played four games all season leading up to Sunday.

Andrew Oglevie, Taylor Leier, and Remi Elie made up the new line and the defenseman was Nathan Paetsch. Those four players combined for a total of 13 shots and six points.

“We had a saying tonight, simple Sunday,” Andrew Oglevie said after the game. “You play three games in a weekend and your legs aren’t exactly going to be the best. Just try to stay simple. Make the plays that are there but if they aren’t you make the smart plays. I thought we did a really good job of that tonight.”

Oglevie returned from a concussion on Friday night, had Saturday off, and scored a big goal at 10:36 of the second period picking his spot skating down the left side. He said,Â “I took a peek and saw Remi on the right side there but the defenseman did a pretty good job taking the pass away. I peeked up and saw short side open a little bit so I tried to put it there and it went.”

[ Read: Oglevie Starts His New Chapter of the Season ]

It went right into the top corner on the blocker side.

Remi Elie and Taylor Leier have been big additions to the Rochester Americans since they’ve joined the team. Leier has 6 points (2G+4A) in 11 games plus two shootout winning goals. Elie was assigned to the Amerks after clearing waivers and has 5 points (3G+2A) in his last four games. The two of them are dominate players that have embraced the situations they’re in. Elie was claimed on waivers by the Sabres and spent a lot of time in the press box before being assigned to Rochester. Leier was acquired in a change of scenery type of trade that sent Justin Bailey to the Flyers and it’s paid off.

Leier was asked about the line and he said, “I thought it was a new look for our line. Me in the middle with Remi and Oglevie. It kind of just clicked. The first period was ok but then the second period I thought we took a big step and made some things happen. I thought we could’ve had four or five goals tonight. It was a fun night for us.”

“Sometimes it clicks,” Leier added. “We’re all professionals and guys have good hockey IQ’s. Sometimes it just naturally clicks and other times it doesn’t with guys. It seemed to go well tonight for us so hopefully we get kept together and keep scoring.”

Leier assisted on two goals this weekend for Elie, one on the power play Saturday in Syracuse followed by a late second period goal Sunday afternoon.

“Preferably we want to keep the puck, attack, and make them defend,” Leier said when talking about the confidence that all three players have with the puck. They don’t want to give it away and one thing they weren’t doing on a regular basis when in possession was dumping the puck in. They’re play makers.

“Leier has tremendous speed and Elie uses his body really well,” Oglevie said. “Elie is a really strong kid and creative as well. I think we were just able to use our speed and get pucks in their end and play keep away a little bit and things turned out good for us.”

The second period goal scored by Remi Elie was a combination of hard work from all five players on the ice. Nathan Paetsch and Jack Dougherty worked the blue line to keep the puck in the offensive zone and Oglevie battled for the puck in front of the net to create space. When Leier got the puck on his stick he sent the puck cross ice to Elie who connected with perfect timing to score and put the Amerks up 4-1.

“Highly skilled, very solid body, strong, physically strong,” is how Nathan Paetsch described Elie. “That one timer goal, not a lot of guys in this league can pick that up. Leier fired it to him on his strong side and he was able to put it top shelf. That’s really impressive.”

Taylor Leier had spent the second half of last season in the NHL without playing, similar to how Elie had been in Buffalo and rarely playing. Last season Elie played 72 games in the NHL with Dallas before joining Texas at the end of the season and going to the Calder Cup finals.

“It’s very hard. When you’re in the NHL you usually start at the bottom of the totem pole and you really have to play almost mistake free hockey and really stick to your role to work your way up,” Leier said when asked about how tough of a situation Elie is in. “When you get down here, maybe not for everyone, but most guys get put into scoring situations or back into the power play. You haven’t played that position in months, like you haven’t been in certain areas. Sometimes it just takes a little bit to get that feel back. I told these guys that when I first got here the last two months or so I had that feeling back where I wanted the puck on my stick all the time. I didn’t have that when I first got sent down because I hadn’t been playing very much. Even though you think you’re still ready you need experience. You need to be playing to be confident.”

That’s a big line – you need to be playing to be confident. These guys are playing big minutes for Rochester and the confidence is obvious to everyone watching.

“Those two games against Syracuse felt like playoff games,” Leier said. “There’s not really a lot of room and you’re getting hit every time you touch the puck. If you haven’t played in the playoffs that’s what it’s like. It’s very hard to score but it’s very nice for the group as a whole to see the puck go in the net. Goals are hard to score in professional hockey so when you see it go in it makes it that much easier mentally and confidence wise to keep producing.”

Sunday afternoon also saw goals scored by Wayne Simpson, Yannick Veilleux, and Andrew MacWilliam in the 5-2 win. The line of Elie, Leier, and Oglevie was also on the ice for that MacWilliam goal in the third period.

It was the third game in 48 hours for both hockey teams. The hard hitting Amerks had four lines with gas left in the tank and it showed as the game went on.

“Tired. It’s definitely a mental test,” Leier said when asked how you he felt. “I remember my first year a veteran told me one time that the best players in this league know how to play on Sundays because nobody really wants to play on those days. Those are the three in three days, I think we had a lot of guys that played well today. They’re really hard games to play in.” That veteran was Chris Connor.

Nathan Paetsch played in only his fifth game of the season and clearly had a lot of energy. He said, “I should have fresh legs, everybody just played two games in 48 hours and I was able to stay home and get to bed at 10:30pm on Saturday night. I was probably the only guy asleep at 10:30.” He was already sound asleep in his own bed when the bus returned to Rochester from Syracuse with the rest of the team. He knew there’d be a chance of playing on Sunday and was able to stay home and rest.

“It’s my job to stay physically prepared, obviously mentally takes a second or two but physically I feel pretty good,” Paetsch said after the game.

He’s a good sport about not playing and is happy with his role on the team. I’ve joked often with him after practices asking what we need to do to get him back in the lineup and with a laugh he’s always said he’d be ready when needed.

When the Amerks lost a close game on Friday night to Syracuse the two teams were tied in the standings. At the end of the games on Sunday the Amerks were back to a three point lead in the North Division.

“Last year at this time we dipped a little and we don’t want to see that again,” he said when asked about where the team currently is. “We have to keep going. There’s a lot of different variables that comes to winning a Calder Cup. We definitely have the ingredients. We have the character, coaching staff, and the players. If the cards fall right, hopefully they do, it’s a long road ahead of us.”

Early in the first period Dalton Smith was challenged to a fight by Brandon Baddock and he accepted. It’s surprising anyone challenges Dalton Smith anymore, he’s one of the toughest players in the American League.

He can throw big rights but he can also play hockey. As the Devils played physical down low they managed to knock him to the ice just over the halfway point of the first period and in doing so knocked him onto goalie Mackenzie Blackwood. Dalton Smith was able to clear the puck around the boards, Eric Cornel took a shot, and Yannick Veilleux tipped it in.

8th of the season for Eric Cornel and the Amerks are up 2-0! Bingo tackled D Smith into Blackwood trying to clear him from the net. It backfired. #DaltonSmithThings pic.twitter.com/10fwXrlxka

The goal was originally credit to Cornel but changed to Veilleux. That also turned out to be the game winning goal.

Wayne Simpson scores his 17th of the season! Amerks up 1-0. pic.twitter.com/dBvLfWZOLF

8th of the season for Eric Cornel and the Amerks are up 2-0! Bingo tackled D Smith into Blackwood trying to clear him from the net. It backfired. #DaltonSmithThings pic.twitter.com/10fwXrlxka

Sissons scores as the Amerks scramble. It's a fresh period for the Devils. Amerks still lead 2-1. pic.twitter.com/B00zamGOgP

Remi Elie from Taylor Leier! Oglevie helped make that play happen with his work in front of the net. pic.twitter.com/jkX8kWeBp8

MacWilliam puts the Amerks up 5-1 and sends Blackwood to the bench! pic.twitter.com/B25CfjQkhq