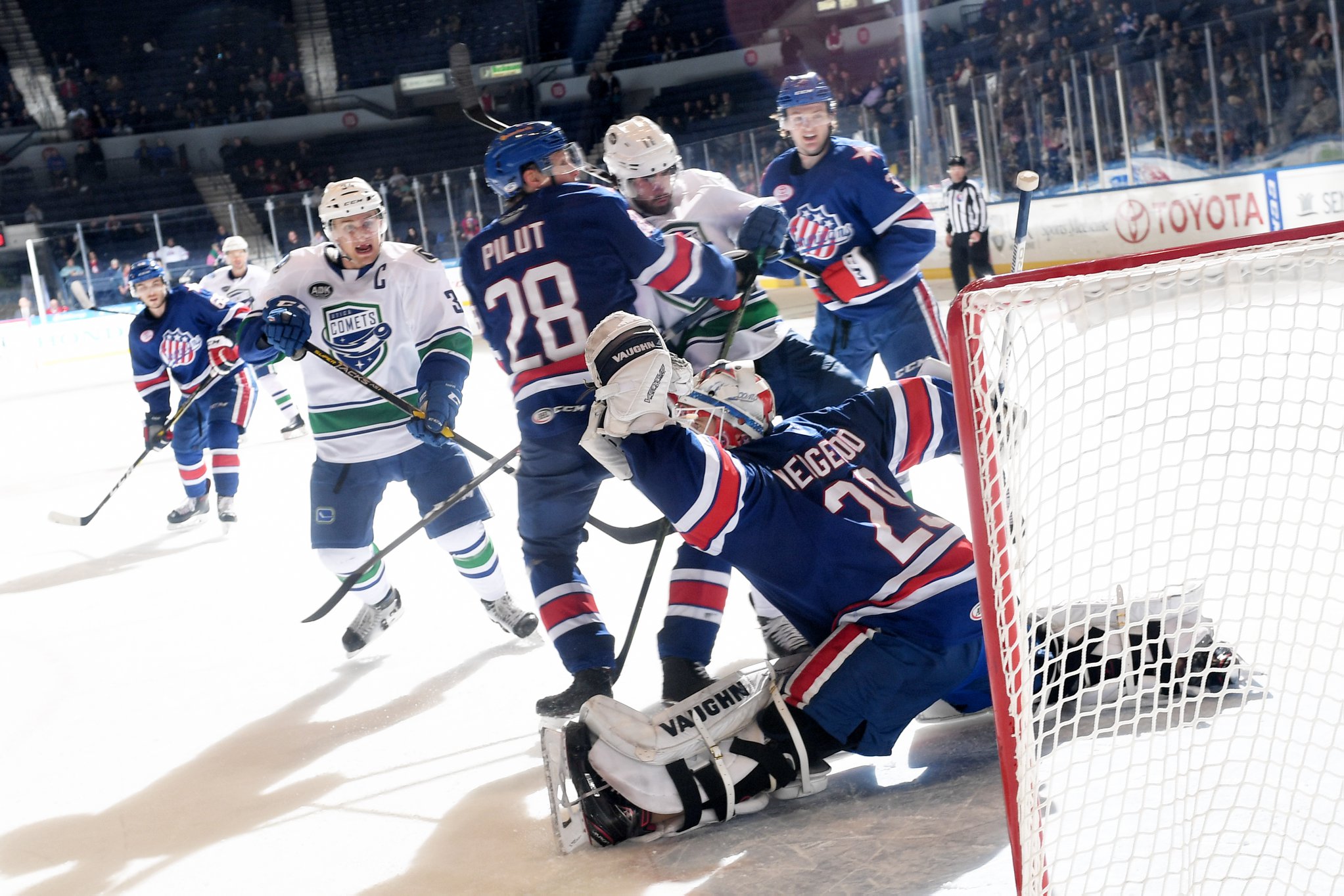 A slow 40 minutes of play opened up in the final 12 minutes of the game when the Amerks scored three goals to win 3-0 against the Utica Comets. Scott Wedgewood made 30 saves for his 25th win and fifth shutout.

The only thing notable from the first period was a ridiculous game misconduct call against Eric Cornel for boarding. As the puck was chipped up in the air it was grabbed byÂ Jonah Gadjovich of the Comets and he was then hit into the boards by Cornel. Two minutes, maybe. Game misconduct, no way. The only reason they likely went extreme with the penalties was because Gadjovich had stayed down on the ice.

Eric Cornel and the team deserve an apology from the league. There's no way that's a game misconduct for boarding. #20 along the glass, not Dalton getting Dalton'd. pic.twitter.com/NA9MtkgcAR

Through 40 minutes the game was scoreless and the Comets had a 17-6 advantage in shots. AnÂ anemic power play for Rochester didn’t help as the team went 0/4 through the first two periods. A few good shots here and there, a couple of good saves by Wedgewood, but there really wasn’t a lot to report after 40 minutes of play.

“I liked our third period and I liked our goaltender right from the start,” Chris Taylor said when asked what he liked about the game. “I liked that our guys pushed back and protected our goalie whenever someone ran into him.”

CJ Smith scored at 8:48 of the third period with an assist to Victor Olofsson to give the Amerks a 1-0 lead. There was a delayed penalty called on Lukas Jasek of the Comets which allowed CJ Smith to hop on the ice as an extra attacker. Victor Olofsson controlled the puck along the right side, spotted CJ Smith skating across the blue line and sent the pass his way. Rasmus Asplund earned a secondary assist.

Talking about the play CJ Smith said with a smile, “I kind of hopped out there for Ports and gave him a nice pat on the back and said thanks for letting me go I guess.” It’s usually supposed to be the next center out but CJ jumped over in place of Kevin Porter and it paid off.

Delayed penalty, Olofsson spotted CJ Smith hop on the ice, found an opening for the pass and CJ scored his 22nd of the season. Amerks up 1-0. The #GoalieSlayer strikes again! pic.twitter.com/RRDvOLQbgY

Big goal hunter Taylor Leier scored on a breakaway with 5:40 remaining in the third period to give Rochester a comfortable 2-0 lead. Andrew Oglevie intercepted a pass in the defensive zone, Leier took off, Oglevie sent him the pass, and Leier buried it.

Oglevie interception, Leier takes off and buries the puck on the breakaway. Big goal to put the #Amerks up 2-0! pic.twitter.com/GRS46k92tU

A slow and pretty boring game to watch without a lot going on finally opened up and ended on an exciting note.

Victor Olofsson scored his 24th goal of the season with 2:31 remaining off a pass from CJ Smith to give Rochester a 3-0 lead and that’s how the game would end. Olofsson set himself up on top of the far side face off circle to blast the one timer from CJ Smith. Comets goalie MarekÂ Mazanec smashed his stick across the pipes immediately after the goal.

CJ Smith to Victor Olofsson for his 24th goal of the season and it's a 3-0 lead for the #Amerks pic.twitter.com/mI5bslri3l

The Comets did have a breakaway and a couple of chances down low early in the third period but Scott Wedgewood was fantastic again and earned his fifth shutout of the season and 25th win.

Rochester has a travel day on Thursday as they get setup to play back to back games against the Charlotte Checkers, the team that has been on top of the league since the start of the season.

Olofsson recalled the first 2 games of the season and said, “We didn’t really play well and Charlotte did. We know that’s a great team, a lot has happened since then, and I think we’re a way better team right now.”

Chris Taylor was asked about the weekend ahead in Charlotte and said, “We always remember the first two games of the year and that’s all we have to tell these guys.”

Kyle Criscuolo returned after missing the last 14 games with an injury.

Sean Malone is the only player currently out on the injured list. He’s considered day to day with a lower body injury.

Just to add to the strange officiating at times, Taylor Leier was given a roughing penalty on the sequence below. Cam Darcy for the Comets wasn’t given anything for skating in and throat punching Lawrence Pilut.

No call on Darcy for the throat punch but Leier gets called for roughing? sigh. pic.twitter.com/trnEExC5ot

In case you missed these on Wednesday…