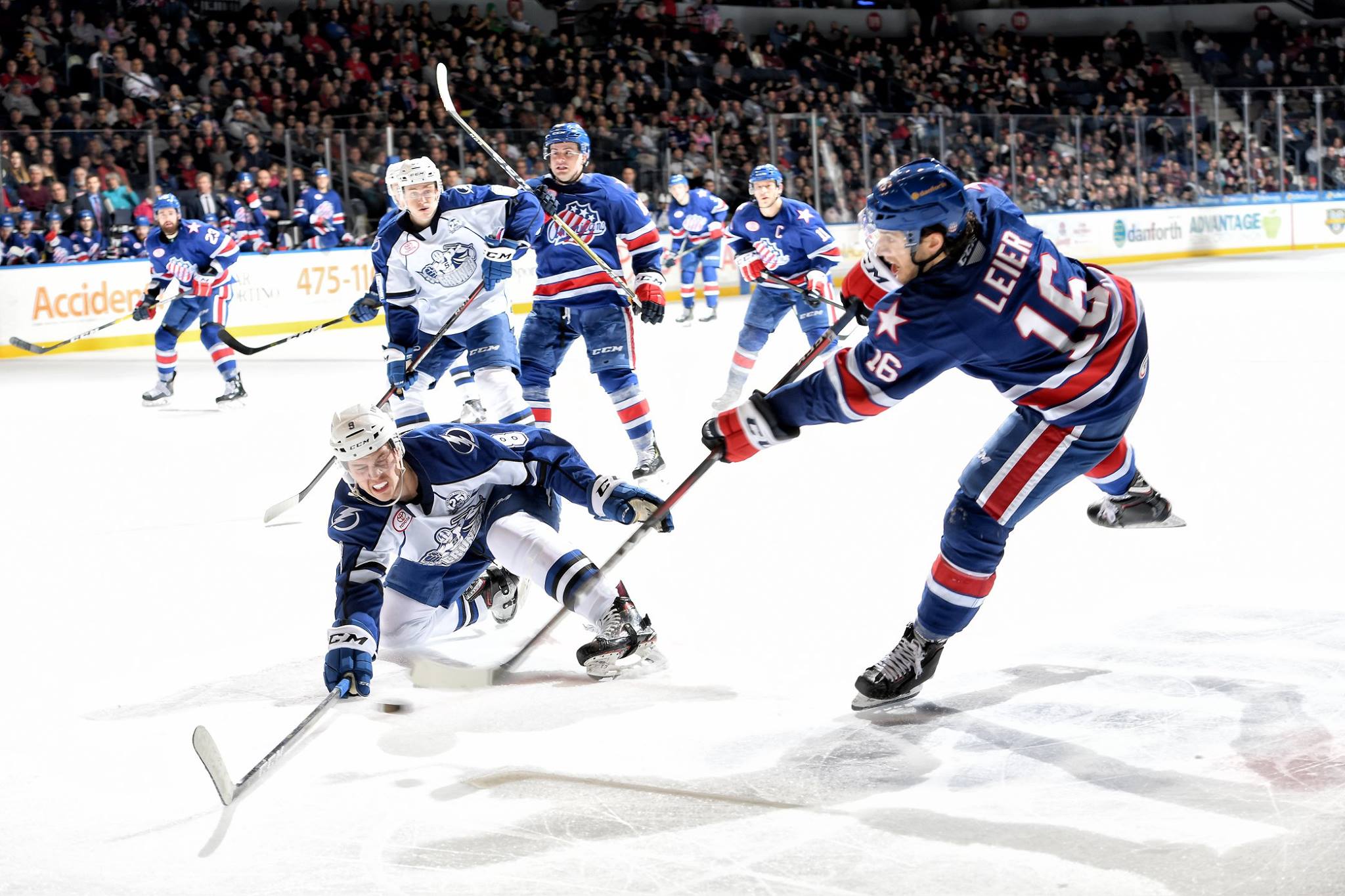 Taylor Leier was shocked back in the middle of January when he found out that the Philadelphia Flyers had traded him to the Buffalo Sabres. That shock turned to excitement when he looked at the standings and saw where the Rochester Americans were. A change of scenery with the chance to prove himself in a new organization. Almost two months and 20 games later Leier has proven himself and proven to the organization that he was the player they thought they’d be getting.

When Leier talked in his first interview he described himself as having one of the biggest hearts out there and that you’d never see him take a shift off. Talk the talk, say the right things, and back it up with the way that they play – a common trend all season with this team.

“He comes and works hard every day, he’s really diligent on what he needs to work on, and how hard he works on taking care of his body,” Chris Taylor had said about Leier after practice last week. “He wants to get better and he wants to get back in the NHL like everybody else. He’s not just here to play well for our team, he wants to get better for himself too and get to that next level where he was a year ago. He’s done a tremendous job especially filling in the roles of playing center or right wing or wherever we’ve asked him to play. He’s done a great job and you can see he’s just full of heart and soul.”

Last season Leier was with the Flyers in the NHL. He only played 39 games and spent a majority of the time in the press box but he was in the NHL. Getting back to the NHL is what everyone wants but in the words of Leier himself as he works towards that he’s said, “super invested in Rochester, pumped for a hopeful playoff run, and 100% in.”

After Leier scored his first game winning shootout goal on January 25th he said, “You only get one chance to make a first impression. I think you guys are going to continue to see my game grow.”

It’s grown, continues to grow, and his ability along with willingness to play center or right wing has made him a valuable piece to this team. Leier has played on first line as needed but his best play has been on a line with Remi Elie and Andrew Oglevie. The three of them on pucks are like a dog on a bone. All in, chasing it down, battling for possession, and more importantly able to put the puck in the net.

Through the 20 games that Leier has played with Rochester he has 14 points (8G+6A) and is a plus-8. The first 34 games of his season with Lehigh Valley he had 19 points (10G+9A) and was plus-2. Through 54 games his 33 points (18G+15A) is good for sixth overall on this Rochester team. Two points ahead of Alex Nylander in seventh.

Leier is not only putting up points but they’re important ones as well. Game winning goals, shootout winning goals, first goals of the game, and even the important empty net goal with a one goal lead in the last minute. The Amerks are 7-0-1-0 when Taylor Leier scores a goal whether it’s regulation or a shootout.

The eight high impact goals he’s scored so far (scroll down for clips of all of them):

Three impact assists (scroll down for clips of all of them):

Chris Taylor likes to focus on the team aspect, not just individual accomplishments. He’s aware of all of them but those stats will rarely be the focus of his replies. When I asked about the impact his goals and assists have had Taylor replied with, “There’s no surprise in how he’s played. There’s a reason we went out and got him. We had a give up a very good payer for him. We knew what type of person he was. We did our homework on that type of thing and to know how he can play on the ice. Even Remi Elie, the two of them together have done a great job in forming a two person combination almost. The two of them have done a great job and changed our whole mindset on the lines up front.”

There were three people out on the ice long after practice ended on Tuesday – Taylor Leier, Remi Elie, and assistant coach Toby Petersen. The work involved shooting a lot of pucks and is a sign of how determined the two of them are to not only help this Rochester team win and go on a long playoff run but also improve themselves to get another shot at the NHL next season.

Speaking of Remi Elie, the Amerks are 5-1 when he scores a goal in a game. Combined if Leier or Elie score the team has a record of 11-1-1-0.

Amerks are home tonight vs Utica, puck drops at 7:05pm. It’s the last regular season game between these two teams, Rochester has the season advantage with a record of 6-3-0-0. There’s one overtime win and one overtime winner in there.

Game winning goal in the 4-2 win over Cleveland.

Correction… Taylor Leier scored this one for his 13th of the season! Puck popped up and he got a piece of it. pic.twitter.com/1bfqWeDGQf

Shootout winning goal January 25 in the 3-2 win over Utica. He was the seventh skater and third to score.

Shootout winning goal February 16 in the 3-2 win on the road in Syracuse. Leier was the only player to score and he did scored in the sixth round.

First goals of the game

Scored the first goal and only goal of the game in a 2-1 loss at home vs Syracuse.

Taylor Leier from Kevin Porter to put the #Amerks up 1-0! pic.twitter.com/00JzxSU1Fj

Short hand goal and first goal of the game on March 2 in the 5-3 road win in Syracuse.

CJ Smith poked if loose, Taylor Leier took off down ice to score his 14th goal of the season. pic.twitter.com/QMD6tFoYw0

First goal of the game in the 5-3 win on March 9 in Binghamton.

Taylor Leier from Alex Nylander and the #Amerks are up 1-0! pic.twitter.com/zvQcaPCcU8

First goal of the game on March 10 in the 6-1 home win over Binghamton.

Leier shot that one with some heat! Amerks up 1-0 pic.twitter.com/L0cz0wa4UE

When it’s a one goal game in the last minute of play and the other team has their goalie pulled it’s a nail biter. Leier sealed the win with an empty net goal, and worked for it. It was a 5-3 win in Binghamton.

Short handed assist on game winning goal in the Amerks 6-1 win over Binghamton at home on March 10. Leier was able to prevent Binghamton from crossing the blue line, sent the puck to Elie, and he scored on a breakaway.

Elie with the shortie to put the Amerks up 2-0! pic.twitter.com/MAiL1Je5n3

Assists on first goals of games

Leier sent a pass to Wayne Simpson on February 9 for the first goal of the game. Rochester lost 5-2 against Utica.

What a pass by Taylor Leier to send Wayne Simpson down ice for the first Amerks goal of the night! pic.twitter.com/6QFiQJeSTN

Primary assist on a Remi Elie power play goal and also first goal of the February 16 game in Syracuse. The same game that Leier scored a shootout winning goal in the 3-2 win.

Elie from Leier and Porter for a PP goal! Amerks p 1-0 pic.twitter.com/lpxm0fPaRl

There’s 15 games left in the season. Chances are there’ll be more goals and assists from these guys that result in winning games.

In case you’ve missed them. Here’s four stories that have also featured Leier:

Taylor Leier is Ready for the Change of Scenery

A Big Stretch of Six in Nine Before a Break