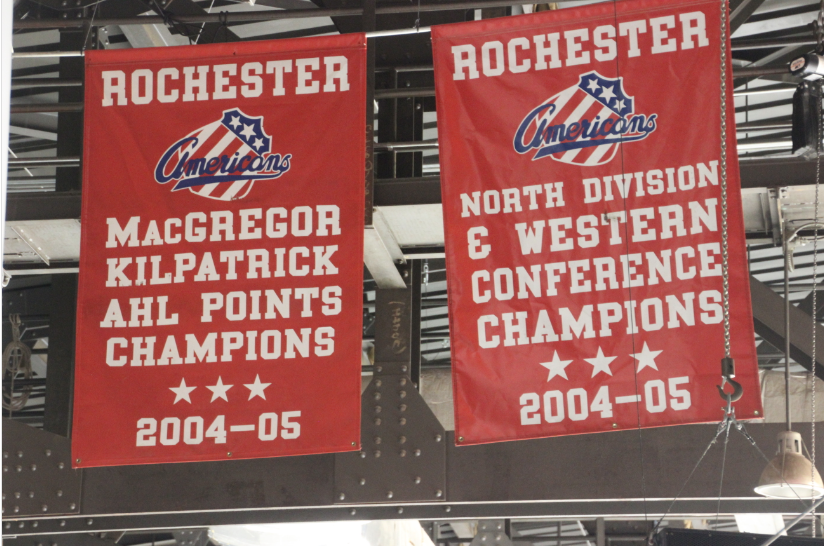 The Rochester Americans clinched a playoff position with a comeback win on Saturday night completing one of many goals set at the start of the season. The win required coming from behind and scoring four goals in the third period to win 6-4.

“We out chanced them 33-12,” Chris Taylor said after practice. “Sometimes they don’t go in for you and you just have to keep going and stay with it. That’s what we did and we ended up winning the game.”

“It felt great,” Taylor said on getting the X to the team name for clinching. “We’ve been waiting a while for it and it’s always nice to have it beside your name. I think the guys worked hard for it all year long.”

Nathan Paetsch scored an empty net goal with 13 seconds remaining to ensure the win. Paetsch talked about the game and said, “It always feels better when you do it yourself and not back door your way in.”

“We have a lot of important games left,” Paetsch added. “There hasn’t been a division title for quite a few years and it’s something we’re focused on. We’re not going to take any of these games lightly and it’s a big weekend for us.”

The last time the Rochester Americans won a division title was the 2004/2005 season when they finished in first place in the North Division, 14 points ahead of the St. John’s Maple Leafs. They also finished first overall in the league with 112 points (51 wins). That was also the NHL lockout year when the league was stacked. Thomas Vanek lead the Amerks that season in scoring with 68 points (42G+26A). Nathan Paetsch and Chris Taylor were also on that team. Along with Jason Pominville, Derek Roy, Paul Gaustad, Chris Thorburn, and many more.

“We want to win our division. I think that’s something the guys have looked forward to all year and they want to get rewarded for how good the season was,” Chris Taylor said. “That’s what we’re focusing on right now and then whatever happens after that we’ll focus on that. I think the guys have focused on it all year. They were talking about it today. They wanted a challenge at the start of year and we gave them a challenge and that was to lead our division. They’re following through on it. They’re not just happy making the playoffs and neither am I. We have some good games left here, three against Syracuse, and we want to be at the top of our game.”

“We want to take first place, it’s a big weekend ahead,” Kevin Porter said. “Home ice is huge and putting up a banner would be really nice. It’s been a while. I mean, Paetsch was here, that was a long time ago (with a laugh). That’d be really nice and give us some confidence going into the playoffs for sure.”

Nathan Paetsch recalled that season saying, “The fan base was incredible. It was packed houses probably the last two months of the season and going into the post season. Going into the playoffs there was a lot of buzz around the city and a lot of fun for us players and fans. That’s something we want to bring back and create for our fan base.”

That season the team averaged 8,447* people in the building during the regular season (this is up for debate – free tickets were all over town often inflating numbers). As a comparison, the average this season is 5,113. The lowest it’s been since the Buffalo Sabres bought the Rochester Americans and reunited the affiliation.

There’s six games remaining in the regular season, three of which are against Syracuse, the team they’re chasing. There’s also games against Belleville and Cleveland, two teams fighting for the last playoff spot in the division. The other team the Amerks play is Binghamton. They aren’t going to be easy games – everyone is playing for something.

Paetsch said, “We’re not going to take it easy and just pedal our way into the playoffs. We want to go after that division title, it means a lot.”

This could be the last full week of practice the team has and they’re using it as preparation leading up to the playoffs and making sure they’re all fine tuned.

“It’s a rival,” Taylor said on treating the games this weekend as playoff games. “Syracuse is a big rival to us. Players don’t get along with each other and that’s the way it should be. I love it, I love playing them, I love going to their building, and I love when they come to our building. It’s pure excitement.”

Syracuse currently has a one point lead in the North Division. Both teams have six games remaining. Three against each other. Syracuse plays Wednesday night which means the North Division race could lead into the final weekend or be decided by Saturday night.

“We’re focused on playing well going into the playoffs. we want to have momentum going in there,” Paetsch said. “Some of us were around in 04/05, not sure who (with a laugh). That meant a lot to the community then, and putting up another banner would mean a lot to us.”

Zach Redmond remains out of practice and games with a lower body injury. The official status is day to day but if the playoffs were to start tonight he’d be ready to play. Taylor said that he’s closer everyday and they’re taking time with him. They want to make sure he’s back when he’s back. The night Redmond broke the Amerks record for goals by a defenseman in a season he took an awkward spill along the boards and missed the following 11 games with an ankle injury. Played 12 games and has missed the last six. The team needs it’s leading defenseman in the lineup but a healthier Redmond for the playoffs is better than a risking performance in the playoffs.

Danny O’Regan didn’t play in the third period on Saturday night in Binghamton and missed practice Monday and Tuesday. Status is day to day.

Andrew Oglevie has missed the last five games and it’s likely that his season is over with another upper body over. When he returned in mid February he was an instant asset to the team. Skating on a line with Remi Elie and Taylor Leier was a difference maker in games. Scoring wise and with physicality.

Final six games of the season: