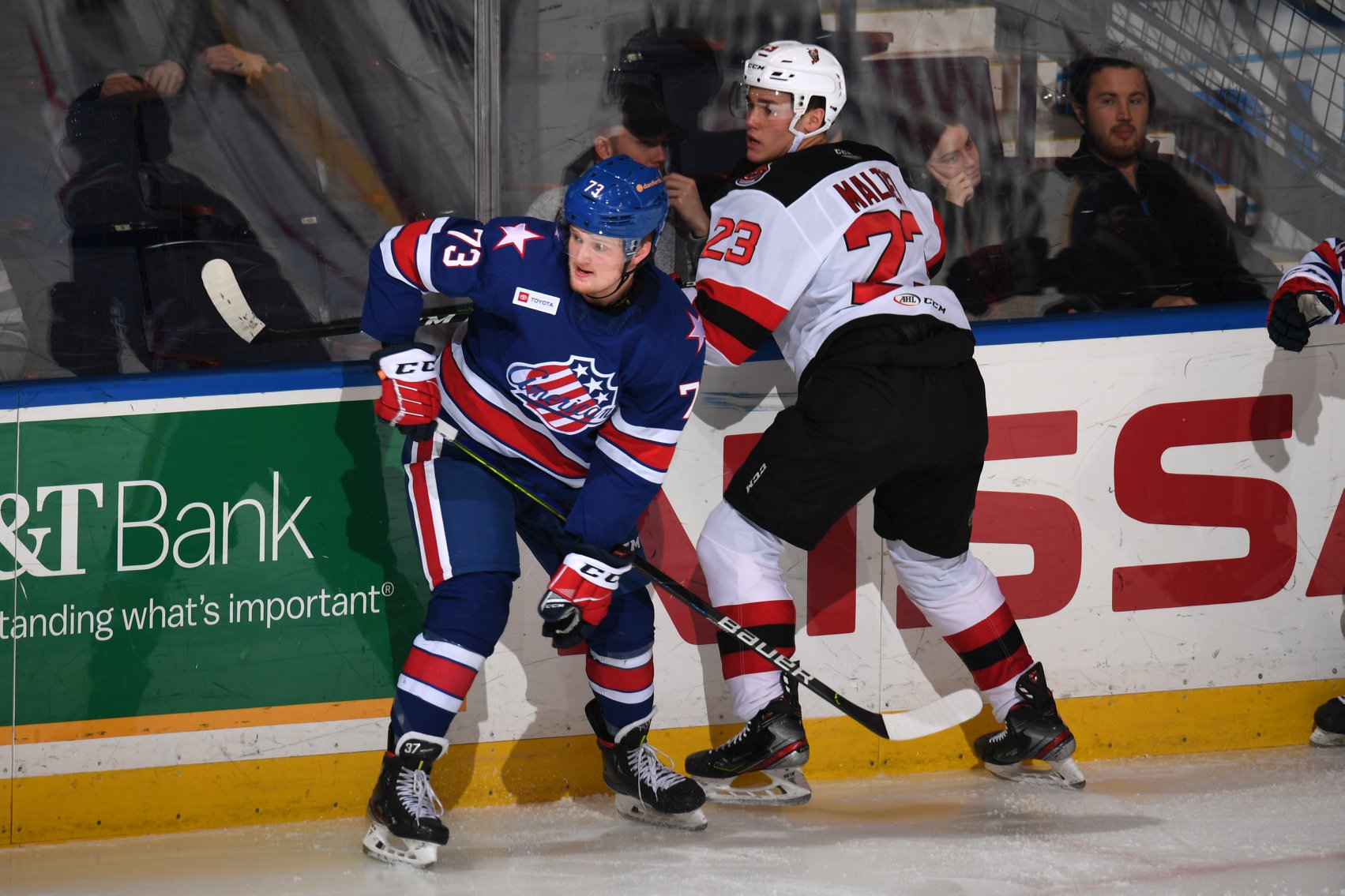 Another one bites the dust. That could be the Binghamton Devils locker room song after defeating the Rochester Americans for the third time in three weeks. The last place devils have figured out the first place Amerks and made them pay the price.

The only good news from the game was that Casey Mittelstadt extended his goal scoring streak to three straight games. Mittelstadt scored a one timer from down low on the power play at 11:31 of the first period off a pass from JS Dea. The goal had tied the game 1-1. After playing six games without a goal it’s a bright spot to see the forward finding the back of the net and finding his stride.

It only takes one shot to score a goal and that’s how Rochester took a 2-1 lead at 11:18 of the second period. Rochester didn’t register a shot on net until MacWilliam found the back of the net off a slap shot from the blue line. Assists were credited to Will Borgen and Dalton Smith. Sean Malone also did a great job in front of the net creating traffic.

“It’s a lot of rust,” MacWilliam said joking about knocking off the rust to score a goal.

Two Brandon’s would score the next two goals to give Binghamton a 3-2 lead. Brandon Gignac scored from the slot at 15:21 of the second period and Brandon Baddock scored at 9:16 of the third period when Rochester struggled to gain control in the defensive zone and clear the puck.

Jacob Bryson and Zach Redmond were on the ice for the third goal against but quickly bounced back with assists on Eric Cornel’s game tying goal at 10:59 of the third period.

The back and forth scoring indicates a close game on the scoreboard, which is what counts, but Binghamton was the better team all night. Jonas Johansson finished the game with 27 saves and kept the game close.

“It’s not so much what they’re doing, I think it’s just stuff that we might’ve lacked a little bit,” is what Andrew MacWilliam said when asked about what Binghamton was doing. “I think that’s been, not an issue, but something in the last few games we need to fix and fix quickly.”

In the shootout the the only goal to be scored of five skaters was by Mikhail Maltsev with a beauty.

Rochester has lost six of their last nine games. The extra point for going beyond regulation keeps them in first place but the North Division is close. There’s only five points separating first place and fifth place. Regulation wins are close as well with each team having between 19 and 21.

Merkley scores a PP goal for Binghamton. Amerks are still trying to get their first shot. pic.twitter.com/mIlnN0QU6O

Another look at the Mittelstadt goal. His third in three games. pic.twitter.com/2qsD5mtFfY

Save of the night so far. Johansson continues to be excellent. pic.twitter.com/LrnRcfrVAv

MacWilliam credited with his first goal of the season. #Amerks 2-1 lead. pic.twitter.com/6cN567zytR

Brandon Gignac ties it up at 2. pic.twitter.com/djrIGMBER9