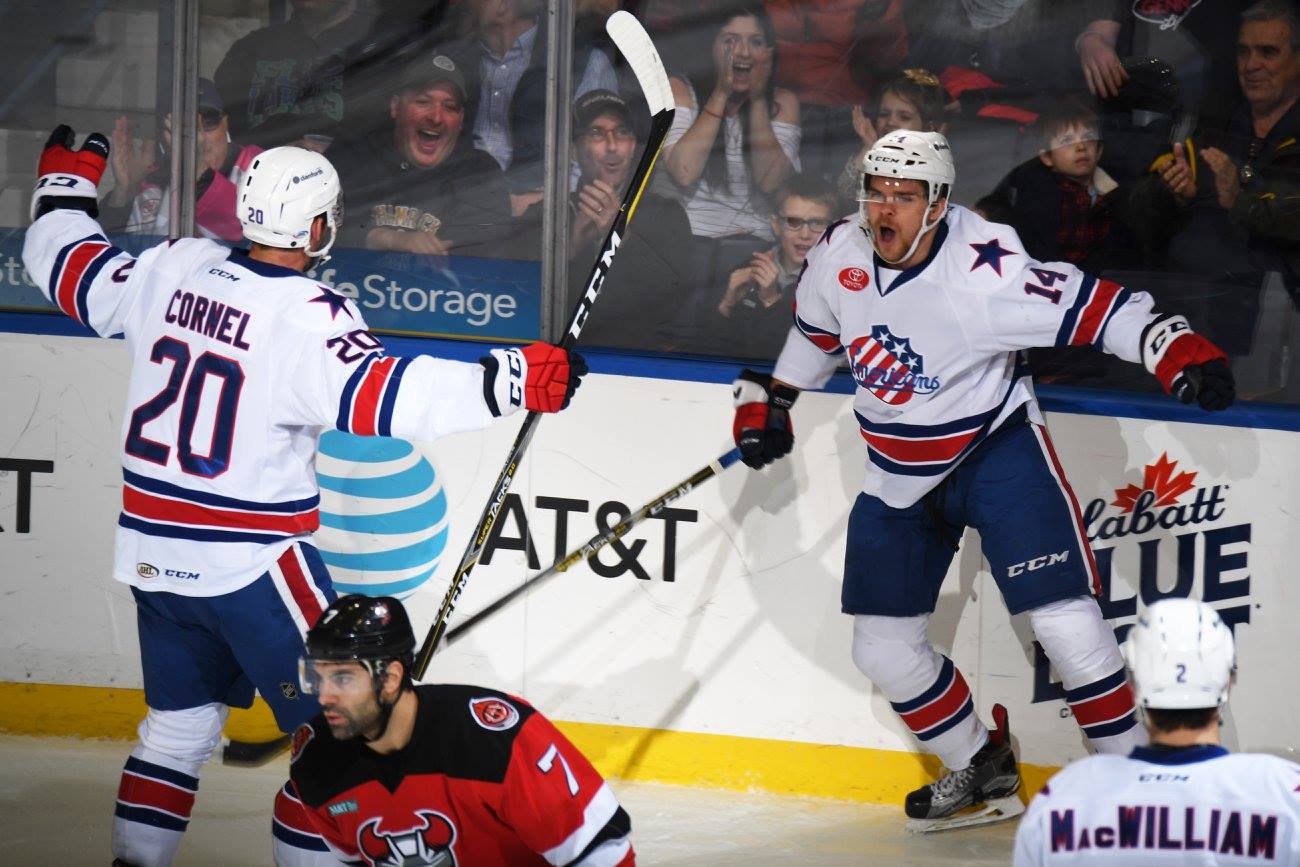 It’s all about how you come back from previous games. The Rochester Americans rebounded in a big way winning 10-3 against the Binghamton Devils after being shutout 5-0 by the same team last Saturday. On Wednesday night the Amerks lost in overtime in a back and forth game losing 6-5. The team played 60 minutes …
Read more

The Rochester Americans won their 5th game of the season tonight against the Syracuse Crunch and it also counted as the Amerks 14th win of the season.Â  I think it’s time to say that this team is the real deal. “I was worried to be honest because we have not played for quite a bit, …
Read more

The summer of 2009 has been an exciting one with the roster that has been built for the 2009/2010 Rochester Americans.Â  There’ll be a lot of questions from fans getting to know some of the new players but also a lot of questions wondering about some favorites from last season. So here’s a quick rundown …
Read more

The Rochester Americans along with other teams in the American Hockey League today announced the schedule format and division alignments for the 2009/2010 season.Â  The biggest change is that the Syracuse Crunch are headed for the East Division in the Eastern Conference and the Amerks stay in the North Division of the Western Conference.Â  Another …
Read more

Stefan Meyer was traded on Thursday by the Florida Panthers to the Phoenix Coyotes in exchange for Steve Reinprecht.Â  Meyer had been drafted by the Panthers in the 2nd round (55th overall) in the 2003 NHL Entry Draft. Reinprecht and Meyer were both free agents this summer and neither were expected to sign again with …
Read more

The Syracuse Crunch and Rochester Americans face off on Friday and Saturday night in the final weekend of the regular season in the American Hockey League.Â  The games have a lot more meaning for the Syracuse Crunch who are in a battle with the Toronto for the fourth and final playoff spot in the Western …
Read more

The Rochester Americans defeated the Toronto Marlies in overtime on Wednesday night by the final score of 5-4.Â  Randal Gelech scored the game winning goal at 1:53 in overtime, assisted by Stefan Meyer.Â  Due to other commitments (sons hockey practice), I didn’t get the chance to watch or listen to the game, so here’s the …
Read more

The Syracuse Crunch are undefeated at home this season against the Rochester Americans and continued that streak on Saturday night with a 3-2 win in front of 6,117 fans at the War Memorial. Unlike previous contests between the two teams in Syracuse the Amerks put in a solid effort on the ice. The Crunch scored …
Read more

The one thing that Rochester Americans can still play for is the role of spoiler.Â  They did a good job tonight by winning 4-2 over the Binghamton Senators and can try again on Saturday in Syracuse.Â  The Senators and Crunch are both in the hunt for the playoffs and each team needs every point they …
Read more

The Rochester Americans lost to the Mantioba Moose on Wednesday night in a shootout and have extended their winless streak to seven games. It wasn’t a bad game by any means. The officiating was questionable, but not the deciding factor. Mike Keane won the game in the seventh round of the shootout beating Amerks goaltender Mike Brodeur.

The Manitoba Moose have the best record in the American Hockey League. The Rochester Americans are second worst in the league. Games like this make you question whether the other team was having a bad night, or if the Amerks really do have the potential to be a contender next season.

On Thursday afternoon the Rochester Americans announce their 22 man clear day roster for the remainder of the 08/09 regular season.Â  It’s yet another sign that the season is quickly coming to a close.Â  It’s sad that hockey season is winding down, but exciting to REALLY start looking forward to next season.Â  That’s a whole …
Read more

The Rochester Americans continued on Friday night what they’ve been doing over the past two months, proving they’re capable of competing with the best teams in the league.Â  They did that earlier tonight with a 3-2 win over the Hershey Bears who are the number one team in the Eastern Conference. Benoit Groulx with the …
Read more