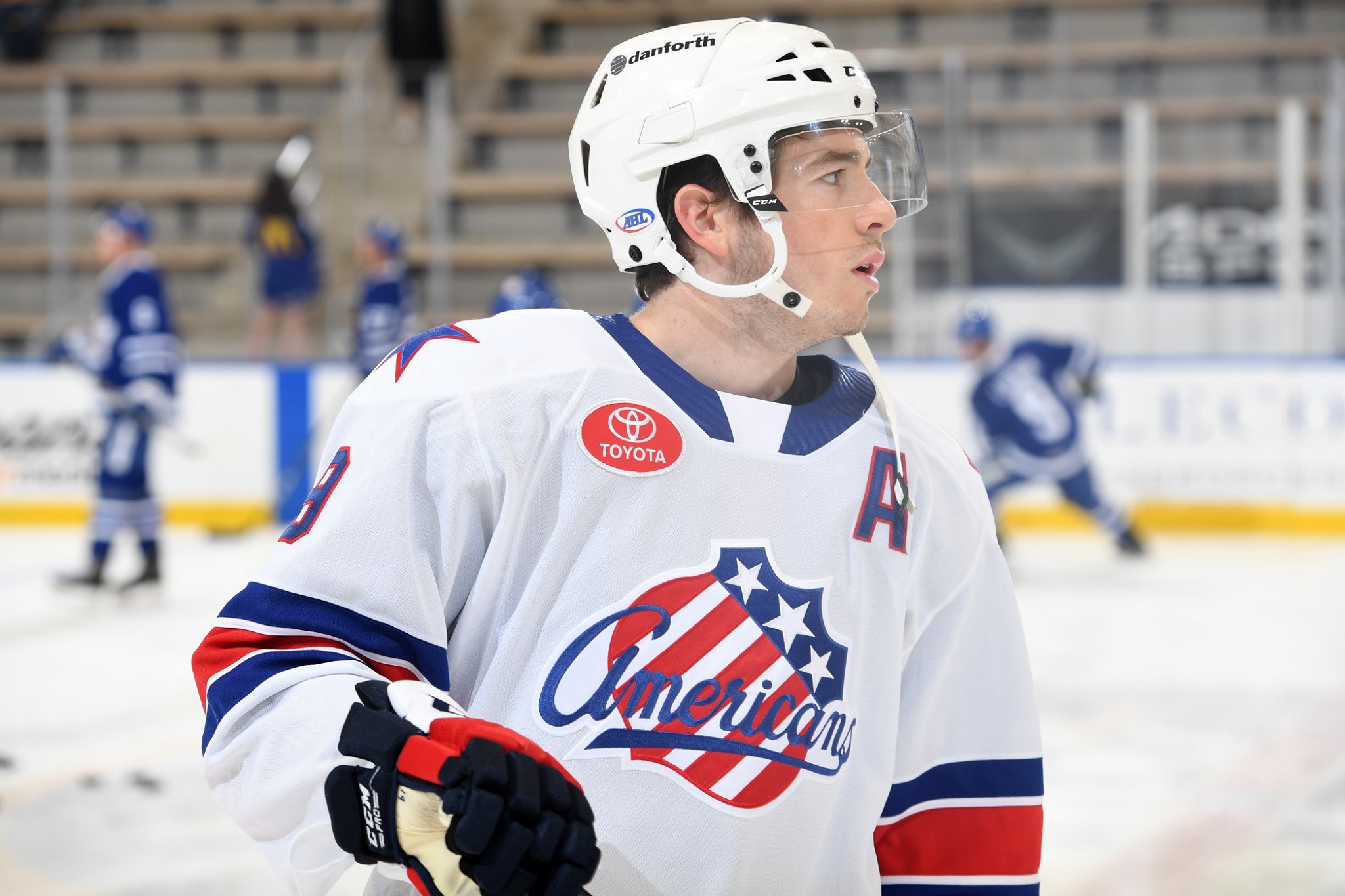 The 64th season for the Rochester Americans starts tonight and the home opener couldn’t be against a better team, thruway rival Syracuse Crunch. Over the course of the last two seasons these two teams have built a disliking for each other.

Zach Redmond talked about playing Syracuse to start the season and said, “They always play hard, we always play hard against them. It’s going to be kind of playoff-esque and to get that one out of the way right away is a good way to start in my opinion.”

By playoffs he means an intense meaningful game.

The start of the season bring nerves and excitement or both depending on how long you’ve played.

“I do, I do. It doesn’t matter how long. It’s been over 30 years of pro hockey and I get excited every year,” Gord Dineen said when asked if he still gets excited for the start of a season. “With the new group of players you try and put yourself in a rookies shoes and how they’re feeling and that gets me excited. I love the process again of building and how the teams going to go. Certainly you don’t want them peaking on October 4 but you want them excited to play and working themselves towards that point of April when we can make a run in the playoffs.”

This is considered year three for this current management and leadership group and they’ve slowed down the talk from last season of being an elite playoff team. This year the goal is to take it one day and one game at a time and keep getting better. On the inside the goal is to always be a team that goes on a playoff run but they’ve all taken a step back from that talk.

“It’s our third year now. The main core group is back and the additions are looking awesome,” Zach Redmond said after practice Thursday. “I think there’s kind of that silent confidence in here right now where we don’t need to talk about playoffs or last year or the year before or what’s ahead. We’re just focused every day on getting better and I think this week every day we have. We’ve put in the work and we’re as ready to go as you can be.”

Rochester will be a playoff team in the American League but how far they go is to be determined. The team won’t say it but I can – another first round sweep will be a bust. Unlike the Buffalo Sabres who are just trying to make the playoffs it’s time for this Rochester team to make it out of the first round.

Chris Taylor was called up to Buffalo as an assistant coach and Gord Dineen has moved into the head coach position in Rochester on an interim basis.

Nathan Paetsch said it well, “Gord really is a head coach. He came here to be an assistant coach but he can be a head coach on any team in this league so it’s not going to be a difficult thing for us to transition to.”

This will be the 19th year for Gord Dineen behind the bench and there should be no concern from anyone. If you’re not familiar with the Dineen name go do a search on Google and YouTube and get to know a name that is considered hockey royalty.

That’s a lot of players by AHL standards to return for a second season or third season. Is it the right core group? They’ve all contributed in big ways over the previous seasons and as Zach Redmond said the additions are looking awesome.

CJ Smith has a chip on his shoulder (in a good way) and should have another All-Star season. There’s been concerns in the past about players pouting their way through a third season in the minors but that’s not CJ’s character at all. I’ve talked to those previous pouting players and talked to CJ Smith enough to know the difference. He’s still trying to prove that he should get a chance at playing full time in the NHL but isn’t slowing down in showing that he’s an elite American League player.

Rasmus Asplund will be looking to have a big season without line mates Victor Olofsson and Danny O’Regan that took most of the headlines with their goal scoring. Could they have scored all of those goals without Asplund at center? Or did they make Asplund look better because they could score goals? Asplund played a big factor in the play of Olofsson and O’Regan but now it’s time for him to move into the spotlight.

Kevin Porter is always good for at least a 40 point season and his leadership in the room is what’s most valuable. You may only hear hockey cliche’s in interviews but he’s a different person away from the microphone.

Zach Redmond doesn’t like to talk about his goals, assists, point totals or records. He prefers to just play the game and he seems more relaxed than the last two years as a new father ready to lead the way on the blue line.

Remi Elie played in 25 games with the Amerks last season and is back as well. He was a core part of the team in the last third of the season and will play a big role as well.

Tage Thompson was a big part of the end of the season when he scored six goals in eight games. After he corrected a few mistakes he was a dominant player. He’s faster and stronger this season. Depending on how things go in Buffalo his stay here could be short or it could be extended. Whether it’s eight games or 70 games he should continue to score and dominate this league.

Jacob Bryson was with the team at the end of last season after finishing college but did not appear in any games.

Curtis Lazar was a free agent signing by the Sabres and he scorer 47 points (20+21) in 57 games last season with Stockton Heat. Expect him to be the number one center in Rochester.

Andrew Hammond is the veteran goalie of the team and can be considered an upgrade from Scott Wedgewood.

JS Dea split time last season between four different teams. New Jersey Devils, Pittsburgh Penguins, Wilkes-Barre/Scranton Penguins, and Springfield Thunderbirds. The Devils claimed him off of waivers early in the season. Pittsburgh took him back. And then he was traded to the Florida Panthers which is how he ended up in Springfield. Like Lazar, given a full season with one team he should be a 20 goal scorer.

Jarrett Burton could be an impact player this season that really hasn’t created headlines. He’s considered strong defensively which is something ever penalty kill unit needs.

Start of Amerks Training Camp Presents One Question for this Season

Two players that faced numerous injuries last season are Sean Malone and Andrew Oglevie. Both players are healthy and ready to start the season in a big way.

Watch the Game for Free

AHLTV is offering opening weekend free to everyone. All teams and all games. Head over to watchtheahl.com to register/sign in and watch. The packages they offer are affordable and worth the investment to be able to watch every game. If you miss a game they are all on demand to be able to go back and watch as well.

Arrive Early for the Game

It’s the home opener and there’s a good chance the arena could have some speed bumps. Last season the concessions were a disaster at the home opener and the start of this season it could be the new metal detectors. They’re no different than what Buffalo has at KeyBank Center and many other arenas and stadiums have across the world but since they’re new there could be some growing pains.

New walk through metal detectors inside Blue Cross Arena. No different than a lot of arenas around the country. pic.twitter.com/BXUShUrUqb